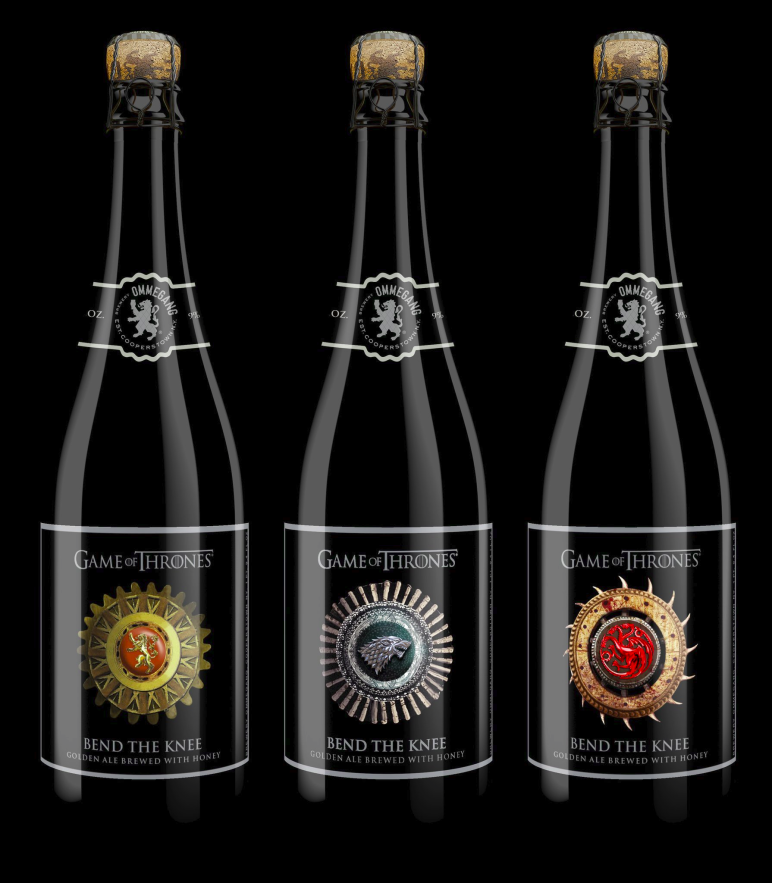 Brewery Ommegang (Cooperstown, New York) and HBO Global Licensing have announced that Bend the Knee Golden Ale Brewed with Honey will be released over Memorial Day weekend as the newest installment in their Game of Thrones series of beers.

Bend the Knee Golden Ale has been crafted by the brewers at Ommegang as the perfect libation to honor the launch of the seventh season of HBO’s Emmy® Award-winning Game of Thrones and pay “homage to the struggle for control of the Seven Kingdoms.”  The foundation for this golden hued ale has been laid with an aroma and flavor that balances a firm maltiness with citrus hops.  Wildflower honey was then added during fermentation to have a light sweetness join the fruity character of Ommegang’s signature house yeast.  At 9% ABV, Bend the Knee “finishes dry and with [a] firm hop bitterness.”  To bring it all back to the show, this limited-edition offering has been packaged “in a series of three collectible 750ml bottles, all finished in matte black and adorned with one of the three Great House sigils: Stark, Targaryen, or Lannister.”

The retail release for Bend the Knee Golden Ale is set for May 22 and will roll out nationwide over Memorial Day weekend.  This limited release can be found on draft and in 750 ml bottles (suggested retail price of $9.99 each) at fine beer establishments located in Alabama, Florida, New York and throughout the rest of Ommegang’s expansive distribution area.  The seventh season of Game of Thrones returns on July 16, so make sure that you have a bottle of Bend the Knee on hand to properly enjoy that first episode.  Prost!