Fans of Due South Brewing should be stoked to hear that the elusive Mexican Standoff Porter is also making a return this month.  Weighing in at 8.5% ABV, this “incredibly complex Porter” is brewed with chocolate, cinnamon, vanilla bean, and chili peppers to create an experience that is “rich, spiced, and full of tingly heat.”  Mexican Standoff Porter is back as “a special limited batch” only available in the brewery’s taproom on draft and in crowlers to-go. 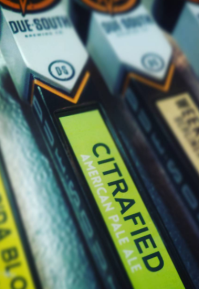 Finally, Due South Brewing Co. is planning a progressive roll-out for the newest beer to be added to the brewery’s portfolio: Citrafied, “a Citra hop heavy American Pale Ale.”  At just 5.1% ABV, this quenching brew is “light, refreshing, and displays some amazing tropical fruit aromas.”  Citrafied is currently only available in the Due South Brewing Co. taproom, but hopheads can expect to see this one on shelves (12 oz. cans) and taps in Florida by the end of November.

Due South Brewing Co. is giving Florida craft beer lovers a lot to get excited about during the month of November, so be sure to swing by the brewery or your favorite beer store to experience these releases.  Prost!