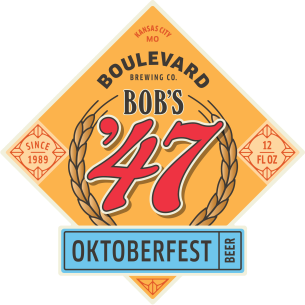 Boulevard Brewing Co. (Kansas City, Missouri) has announced that its long-standing Bob’s ’47 Oktoberfest Beer will officially begin its Seasonal return during the week of August 6.

Bob’s ’47 is Boulevard’s “take on a traditional German-style Marzen/Oktoberfest” that has been brewed annually for 25 years as “a tribute to former George Muehlebach Brewing Company master brewer and early friend and mentor to John McDonald, Bob Werkowitch.”  To ensure that Bob’s ’47 is allowed “adequate lagering time before its fall release”, the first batches of this beer are typically brewed in late May to early June. After a “three week primary fermentation, Bob’s ’47 is crash cooled and lagered at 32 F until packaging.”  This lengthy process produces an “incredibly smooth and delicious” Bob’s ’47 Oktoberfest (5.8% ABV) “that showcases herbal/woody Vanguard hops against a toasted malt background.”

Bob’s ’47 Oktoberfest Beer will roll out in the greater Kansas City area on August 6 and enter wider distribution shortly after that date.  You can expect to find this Seasonal brew available in 6-packs of 12 oz. bottles and on draft at select craft beer-focused establishments located in Florida, Missouri, and throughout the rest of Boulevard Brewing Co.’s distribution area.  Prost!