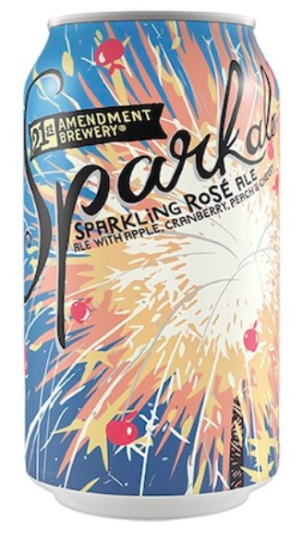 Developed to be “a bit of a departure from 21st Amendment’s [lineup] of bold, West Coast-style IPAs”, Sparkale is a light pink Sparkling Rosé Ale brewed “with apples, peach, cranberry & cherry, for a light, fruity, tart flavor and a huge ‘sparkle factor’.” Weighing in at an easy drinking 5.5% ABV, Sparkale is a lower calorie, gluten-reduced option that serves as “a reminder of life’s simple pleasures.”

“We’ve learned a lot about using fruit in our brews—from ‘Hell or High Watermelon,’ to ‘Blood Orange Brew Free! or Die IPA,’ and we love the refreshing quality that fruit can bring to new styles of beer. Sparkale is our latest adventure, and we’re so excited to offer a completely different type of beer that will quench your thirst and delight your taste buds any time of year.”

Sparkale will officially launch in February with availability in 6-packs of 12 oz. cans and on draft.  You can expect to find this new Year-Round offering at craft beer-friendly retailers, bars and restaurants located in Florida, California and throughout the rest of 21st Amendment’s 25 state distribution footprint.  Prost!