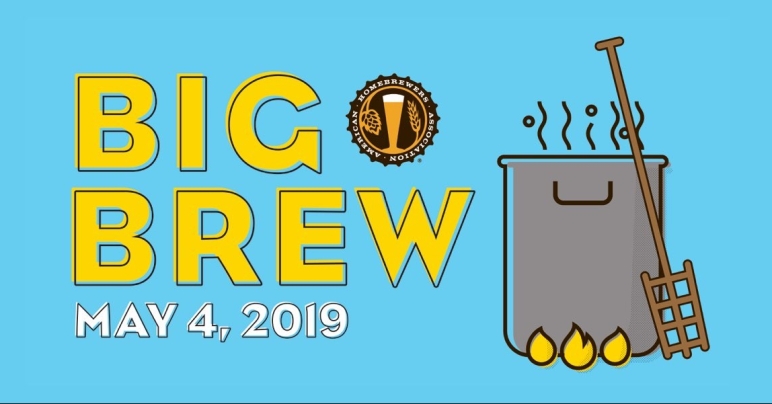 will celebrate National Homebrew Day by partnering with over 300 breweries, homebrew shops, and beer clubs around the world on Saturday, May 4 for the 22nd annual celebration of Big Brew.

Recognized as being “the largest annual gathering of homebrewers with an anticipated attendance of over 5,000 people” in 2019, the AHA Big Brew event gives homebrewers – of any skill set – from all over the country and world the chance to get together with other homebrewers in their area to network and brew a beer. The official Big Brew recipes for 2019 are the TransAtlantic Blonde Ale from Simple Homebrewing (the upcoming Brewers Publications title) and Battlecow Galacticose New England IPA from Providence Brewing Company.

Although each Big Brew location (click here to view the interactive map and find a site in your area) will have a unique schedule of activities throughout the day, it is guaranteed that all official locations “will feature brewing demonstrations, and opportunities to learn about the greatest hobby in the world – homebrewing!”  The event will also feature a simultaneous, worldwide toast to homebrewing at 1 p.m. ET.

The craft beer movement as we know it today would not have been possible without the dedicated and curious homebrewers that eventually took a dream and a hobby to the next level by opening a brewery.  The craft that is homebrewing and those devoted to it deserve our respect and should be celebrated.  Whether you are an avid homebrewer or a just a craft beer lover that is interested in learning more about the hobby, make sure that you do what you can to attend an official Big Brew event or a locally organized backyard party to brew up one (or both) of the featured Big Brew beers and raise a glass to art of homebrewing on Saturday, May 4.  Prost!