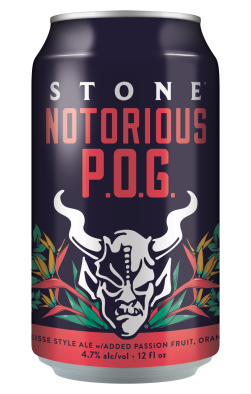 Stone Brewing (Escondido, California) has officially announced that its fan-favorite Stone Notorious P.O.G. Berliner Weisse will return for a nationwide Limited Release during the week of July 8, 2019.

“I love my hops in beer, but I also appreciate brewing and enjoying a wide range of beer styles,” said Kris Ketcham, Stone Brewing Senior Manager of Brewing & Innovation who collaborated alongside Jonah Ray on the first brew. “Clearly our fans also appreciate the exploration of other styles, beers that rise to other occasions, and the occasional beer that wows us at the most unexpected time. We originally set out to brew a POG IPA but I’d been exploring with the Berliner Weisse style and knew it would highlight those fruit flavors best. I never would have imagined the following this beer has created, and I’m continually impressed by our fans’ appreciation for a beer that’s balanced, flavorful and intriguing – no matter the style.”

Stone Notorious P.O.G. Berliner Weisse is scheduled to officially release during the week of July 8 and will hang around as long as supplies last.  You can expect to find this Limited Release available in 6-packs of 12 oz. cans, 19.2 oz. cans, 22 oz. bottles and on draft at select craft beer-focused establishments located in Alabama, Florida, California, Virginia and throughout the rest of Stone Brewing’s nationwide distribution area.  Prost!