Big Storm Brewing Co. (Cape Coral, Florida) has officially announced that it has brewed Burrowing Owl Beer to raise funds and awareness for Cape Coral Friends of Wildlife (CCFW) and its mission to protect endangered Burrowing Owls in the Cape Coral area.

Coming in at about the size of a beer can, Burrowing Owls – “Cape Coral’s official bird with nearly 500 pairs in the city” – are one of the smallest owls in the world and they “literally live underground in burrows.”

Since these cute little guys and gals (pictured below) are currently on Florida’s threatened species list, the folks at Cape Coral Friends of Wildlife – a volunteer-based nonprofit organization – are doing everything they can to protect these owls.  Working on Wednesdays whenever the weather permits, volunteers from CCFW “put in over 10,000 hours a year” performing maintenance on Burrowing Owl burrows located in Cape Coral. Their efforts include “trimming burrows with high weeds, installing PVC pipes and perches on newly found burrows, and repairing and cleaning up existing burrows.” To further build upon their efforts, CCFW is currently focused on “[acquiring] lots through donation for preservation for [the owls’] habitat and food source. CCFW is asking churches, schools, and homeowners to put in starter burrows – a free service provided by CCFW.”

“We are pleased that Big Storm Brewing and the community are coming together to help protect the Burrowing Owl which drives our local eco/sustainable tourism,” Said Pascha Donaldson, vice president of CCFW.  “People come from all over the world to meet our burrowing owls and we have one of the largest nesting populations on the planet.”

As for the actual beer, Burrowing Owl Beer is a Kentucky Common brewed “with 30% of its malt bill as corn, so some light sweet corn flavor comes through.” Amber in color with dark ruby hues, Burrowing Owl Beer (5.2% ABV) has “notes of bread toast, pepper and berries.”

“Our Cape Coral taproom is located next to a Burrowing Owl nest which we think is super cool. As we started to look for ways to give back to the community, we felt supporting these awesome little birds was an obvious choice,” said Big Storm co-owner L.J. Govoni. “Now our customers can try this new beer and help us give back to the CCFW by supporting out Burrowing Owl Beer. I know I speak for all of us when I say we are excited to raise a pint to our pint-sized owls.”

Burrowing Owl Beer is available exclusively on draft at the Cape Coral location of Big Storm Brewing Co.  A portion of the proceeds raised from the sale of Burrowing Owl Beer “will go to support . . .  Cape Coral Friends of Wildlife and its work to save the threatened species.”  Prost! 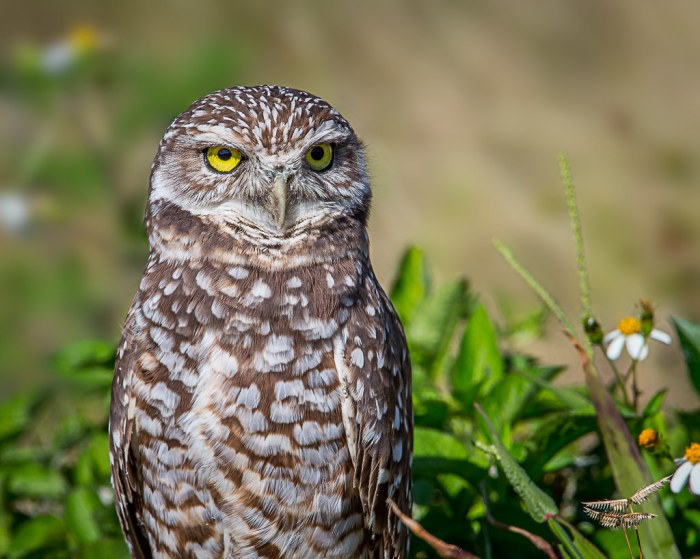