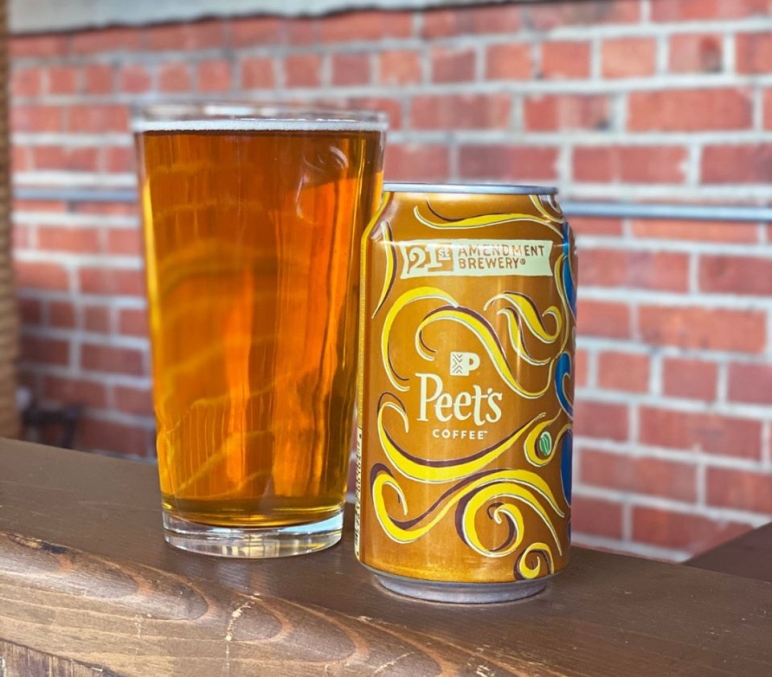 21st Amendment Brewery (San Leandro, California) has officially announced that it has released 1966 Coffee IPA, a special collaboration project with Peet’s Coffee, as its first Insurrection Series offering of 2020.

Brewed to recognize the year when “Alfred Peet opened his coffeebar at the corner of Walnut and Vine in Berkeley and changed the way Americans, and the world, thought about coffee,” 1966 Coffee IPA (6.8% ABV) is a West Coast-style India Pale Ale featuring “aromas of fruity blueberries and bright citrus notes from Columbus, Citra, Amarillo, and Centennial hops.”  To cover the coffee side of this IPA, Ethiopian Super Natural Coffee from Peet’s Coffee was “incorporated several ways in the brew, including ‘dry-hopping’ with whole beans,” to provide “[accents] of rich coffee . . . balanced with malt structure and defined bitterness all giving this West Coast IPA a phenomenal flavor profile.”

“Rather than the traditional dark beer with coffee, we wanted to have fun with the melding of hops and coffee, paying attention to the coffee varietal and manipulating the roast level to nudge the subtle flavors from the bean for an incredibly unique IPA,” says Shaun O’Sullivan (Co-Founder and Brewmaster, 21st Amendment). “Working closely with Peet’s Roastmaster, Doug Welsh, we settled in on Peet’s Ethiopian Super Natural with its lemon, bergamot, and blueberry characteristics perfectly complementing the hop flavors.”

1966 Coffee IPA is rolling out now and will hang around for a limited time.  You can expect to find this new Limited Release offering available in 6-packs of 12 oz. cans and on draft at select craft beer-focused establishments located in Florida, California and throughout the rest of 21st Amendment’s 28 state distribution footprint. Prost!