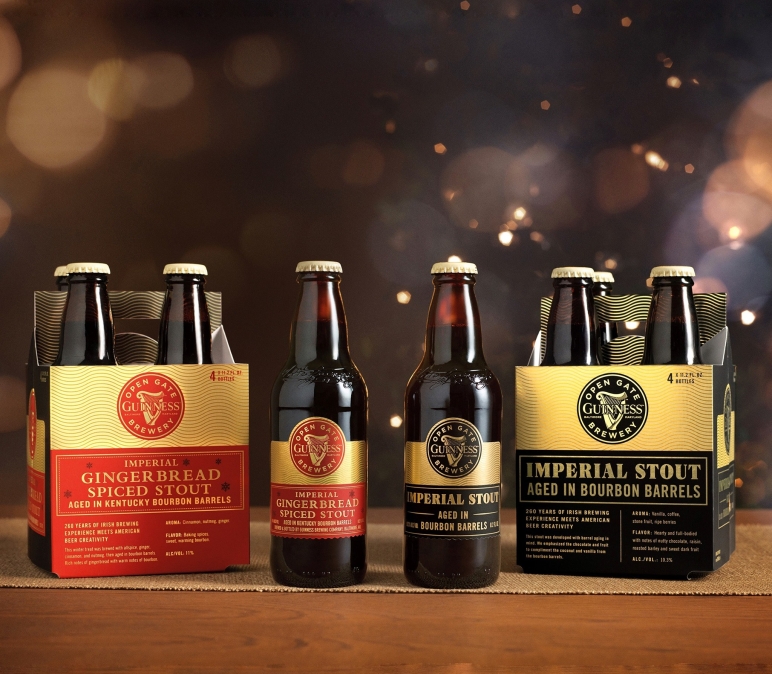 Fittingly announced by Guinness a few days ago on International Stout Day, The following two Stouts, both aged in Kentucky Bourbon barrels, are hitting U.S. beer shelves “just in time for the crisp late fall weather and the hopeful spirit of the holidays” (descriptions sourced directly from the brewery’s press release):

“Barrels have been a part of Guinness brewing history for centuries, so we’re excited to continue expanding on that tradition by becoming a center for the barrel-aging experience in the U.S.,” said Sean Brennan, Senior Brewer at the Guinness Open Gate Brewery in Baltimore. “It truly gives us the chance to create, experiment and discover. We brewed Imperial Gingerbread Spiced Stout to evoke the warm, rich flavors of holiday spices, while we knew Imperial Stout needed to be showcased on its own after it was originally brewed as part of the Stock Ale blend last year.”

Guinness Imperial Gingerbread Spiced Stout and Guinness Imperial Stout are rolling out now and will be available for a limited time during the holiday season. You can expect to find these Limited Release brews available in 4-packs of 11.2 oz. bottles at select beer-friendly establishments located in Alabama, Florida, Maryland and throughout the rest of the brewery’s nationwide distribution network. Prost!