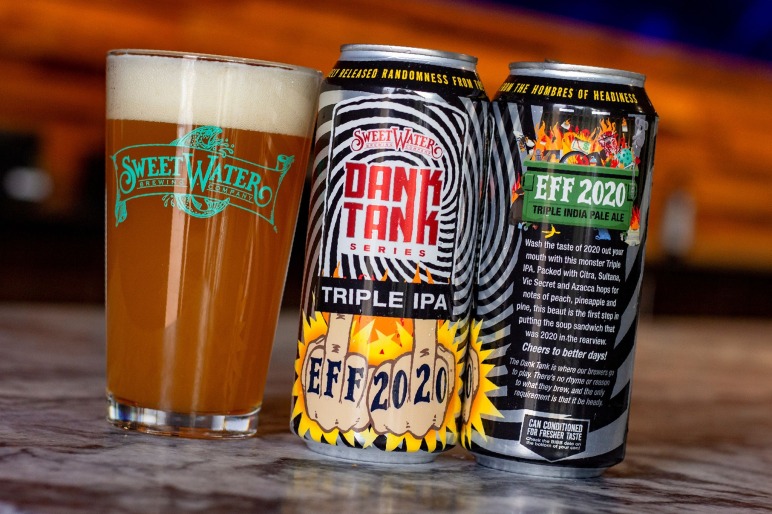 SweetWater Brewing Company (Atlanta, Georgia) has officially announced that it will begin the Limited Release of EFF 2020 Triple IPA in late December 2020.

Dropping as SweetWater’s newest Dank Tank Series release and a final adios to the year from hell, EFF 2020 is a Hazy/Juicy Triple India Pale Ale “packed with Citra, Sultana, Vic Secret and Azacca hops for notes of peach, tropical citrus, pineapple and pine.” Clocking in at 55-60 IBUs and a hefty 9.2% ABV, EFF 2020 is guaranteed to “wash the taste of 2020 goodbye.”

“This year, 2020 hit us hard so we decided to answer back by raising a hand and slapping it back behind us,” said Nick Nock, Head Brewer at SweetWater. “To do that we had to dominate and go big and bold, busting out a beer at 9.2% ABV, representing we conquered 2020. Despite being in your face, it’s still silky smooth with a bouquet tropical citrus to welcome in 2021. Every sip leaves you with a lingering smile waiting for another taste.”

EFF 2020 hit the Taproom at SweetWater Brewing Company on December 23 and is entering distribution now. You can expect to find this Limited Release available in 16 oz. cans and on draft at select craft beer-friendly establishments located in Alabama, Florida, Georgia and throughout the rest of the brewery’s distribution area. Prost!