“San Francisco is notorious for its foggy climate, but one neighborhood is a pinnacle for sunshine—Potrero Hill, where Anchor calls home. Fog Breaker IPA pays homage to our fortunate spot in the city,” said Brewmaster Scott Ungermann. “If you’ve spent time in San Francisco, you’ve experienced that distinctive moment when the sun finally shines through the fog. We bottled up that experience into a San Francisco IPA that’s filled with layers of hop flavor.”

Fog Breaker IPA is rolling out now with availability in 6-packs of 12 oz. bottles, 22 oz. bottles and on draft.  You can expect to find this new Year-Round offering at select beer-focused retailers, bars and restaurants located in Alabama, Florida, California and throughout the rest of Anchor Brewing’s nationwide distribution area.  Prost!

Release – Year-Round, launching September 2018
Style – American India Pale Ale
ABV – 6.8%
Hops – Apollo, Nugget & Denali; dry-hopped with Citra, Citra Cryo, Cascade & Denali
Malts – 2-Row Pale & Malted Wheat
Fun Fact – On this beer’s development: “Fog Breaker IPA is another first for Anchor; the first beer exclusively developed at Anchor Public Taps’ pilot brewery that has been moved into full-scale production. Located just across the street from the iconic brewery, Public Taps is a pilot brewery and bar that serves as a gathering place for locals and visitors seeking a one-of-a-kind San Francisco experience. Public Taps is home to The Potrero Project—a collection of beers brewed at the pilot brewery for guests to enjoy on tap at the bar and share feedback with the Anchor crew. Fog Breaker IPA evolved from The Potrero Project, quickly becoming one of the most popular beers served there this year.”
Availability – 6-packs of 12 oz. bottles, 22 oz. bottles & draft
Beer Finder – https://www.anchorbrewing.com/connect/beer_finder 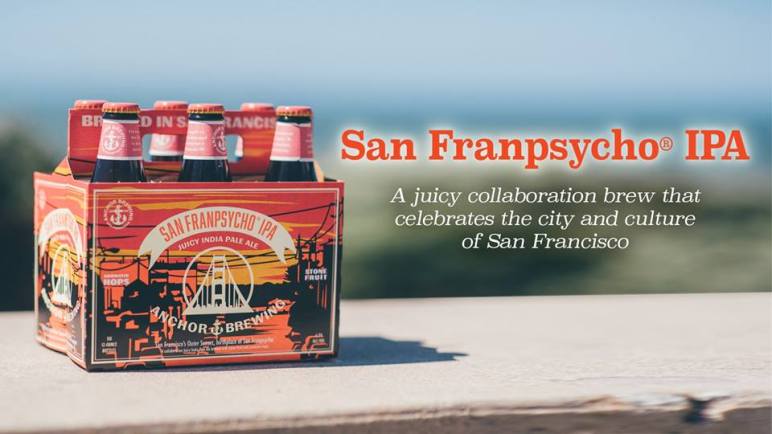 Brewed in collaboration with the community-based clothing and lifestyle brand of the same name, San Franpsycho is a “delicious, balanced and easy-drinking” India Pale Ale that is meant to “[celebrate] the city and culture of San Francisco.”  With the help of a public vote on various batches, the crew at Anchor Brewing developed this version of San Franpsycho IPA with an inventive recipe that incorporates “a mixed culture of yeast to create a unique and fruity estery nose.”  Peach and apricot puree was then added “during the secondary fermentation, giving the beer a pleasant hint of sweetness and abundantly fruity aromas of peach, apricot, and pineapple with a bit of funky dank.” With all of this resting on a base of 2-Row Pale, Red Wheat and Acidulated malt, the completed San Franpsycho IPA (6.3% ABV) “pours a hazy golden straw color” and boasts a “slightly sweet taste, with a mild Belgian complexity from the yeast and a finish of fruity hops.”

“San Francisco is a special little city on the edge of the universe,” said Anchor Brewmaster Scott Ungermann, “and at the same time, what happens here is amplified by the tech industry that reverberates around the world. This city is a launching point for so many things, and a place where people come to seek their own way. San Franpsycho IPA is a celebration of that pioneering spirit for everyone to enjoy.”

San Franpsycho IPA is rolling out now and will be available through September 2018.  You can expect to find this Seasonal Release available in 6-packs of 12 oz. bottles and on draft at beer-friendly retailers, bars and restaurants located in Alabama, Florida, California and throughout the rest of Anchor Brewing’s nationwide distribution area.  Prost!

Anchor Brewing (San Francisco, California) has officially announced the release of Brewers’ Pale Ale – Nelson Hop Blend as the premier offering from its new series of American Pale Ales made with an evolving hop blend.

Developed to be an engaging new line of beers “brewed by brewers, for brewers”, Brewers’ Pale Ale is “a bright and fruity American Pale Ale bursting with hop aroma and flavor” sourced from a hop blend that will steadily evolve as time goes on.  The first version of Brewers’ Pale Ale will showcase Nelson Sauvin, a unique hop from New Zealand that provides “a deliciously fruity character.”  Hop lovers can expect Brewers’ Pale Ale – Nelson Hop Blend (5.3% ABV) to offer a “crisp, refreshing and flavorful” experience that boasts “strong aromas of grapefruit, passion fruit, citrus peels and dank piney hops.”

“Our brewers work together to develop and constantly evolve recipes until they’re absolutely delicious and uniquely Anchor,” said Brewmaster Scott Ungermann. “For this beer, our first step was to create just the right malt bill to showcase our favorite hops and then blend those hops within that framework. While it took many iterations and taste tests to make a killer everyday pale ale, our brewers were up for the challenge. The result is a modern American Pale Ale with the fresh aromatics of an ever-changing blend of our brewers’ favorite hops for a bright, crisp, delicious and perfect go-to beer.”

Brewers’ Pale Ale – Nelson Hop Blend is available now in 6-packs of 12 oz. bottles and on draft at select beer-friendly establishments located in Alabama, Florida, California and throughout the rest of Anchor Brewing’s distribution area.  Although the Brewer’s Pale Ale brand is listed as a Year-Round, the “Nelson Hop Blend” will only be available for a limited time as “Anchor brewers . . . continue to experiment with different hop varieties, showcasing evolved recipes and new hop blends throughout the year.”  With that said, be sure to get your hands on some Brewers’ Pale Ale – Nelson Hop Blend while you have the chance.  Prost!