To properly bring the summer experience to their seasonal lineup of Nitro Series offerings, the brewers at Breckenridge Brewery decided to create Nitro Orange Cream Ale as their “twist on the historical American cream ale style.” This balanced Cream Ale gets its classic orange creamsicle character thanks to a recipe that includes a dry hopping with citrusy Mandarina Bavaria hops and natural orange zest that was added during fermentation.  The nitrogen then completes the experience by adding a soft, creamy texture that “accentuates the smooth character of the style.”

“Nitro Orange Cream Ale is a unique and easy drinking summer beer that got its inspiration from history and nostalgia,” shares Todd Usry, President and Brewmaster of Breckenridge Brewery. “Our Nitro seasonals bring to life each season through inventive flavor combinations. The Nitro Series as a whole is the result of years of experimentation with nitrogen, exploring how it enhances flavor and texture. A nitrogen-infused beer’s cascading pour is mesmerizing, and the softness of its mouthfeel has inspired us to play with different styles and ingredients.”

Nitro Orange Cream Ale is available now and will be hanging out all summer long.  You can expect to find this Seasonal brew available in 4-packs of 15.2 oz. nitrogen-infused cans at craft beer establishments located in Florida, Colorado and throughout the rest of Breckenridge Brewery’s distribution area.  Prost!

To give this new Spring Seasonal offering a proper Irish infusion, Breckenridge Brewery went to the source by teaming up with Ireland’s Boundary Brewing Cooperative.  After a bit of brainstorming, the two breweries decided to craft a Dry Irish Stout that would be “a new world take on an old world classic.”  To reach this goal, roasted barley and Irish Stout Malt were employed to create “subtle flavors of coffee and hints of grain”, and just enough hops were added to provide balance and “a particularly dry finish.”  The finished Nitro Dry Irish Stout was then packaged in Breckenridge’s “innovative nitrogen-charged can” to give the beer a velvety head and delightfully creamy mouthfeel.

“Our collaboration with Boundary Brewing resulted in a truly authentic Irish stout. We worked closely with their brewer, Matthew, to develop this recipe using ingredients from his homeland,” explained Todd Usry, President and brewmaster of Breckenridge Brewery. “The process of creating the recipe together and having Matthew come here to brew with us was so positive for our entire brew staff, and the outcome is delicious.”

Nitro Dry Irish Stout will start hitting shelves in late February and will be available until the release of the next Nitro Series offering.  This Spring Seasonal can be found in 4-packs of 15.2 oz. cans at craft beer-friendly establishments in Florida, Colorado and throughout the rest of the Breckenridge distribution area.  If you would like to add a little variety to your St. Patrick’s Day beer selection, keep an eye out for Nitro Dry Irish Stout this spring.  Prost! 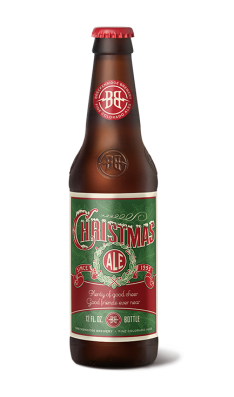 To get the Holiday Season in full swing, Breckenridge Brewery (Littleton, Colorado) has officially sent their Christmas Ale and Holidale out for national distribution.

Brewed with the same recipe since it was first released in 1993, the iconic Christmas Ale is Breckenridge Brewery’s riff on the Winter Warmer.  Unlike a lot of the Winter Warmers and Holiday Ales currently on the market, Christmas Ale’s recipe does not include any spice additions.  Instead, this Strong Ale relies heavily on “rich flavors of caramel and chocolate from carefully roasted malts” and any notes of spice have been sourced from the use of Chinook and Mt. Hood hops.  Since this seasonal has achieved a level of popularity that has caused the beer to sell out early each year, the brewery has “increased the volume of Christmas Ale’s production by twenty-five percent” to hopefully keep up with demand in 2016.

“People look forward to our annual release of Christmas Ale because it marks the start of the holiday season,” said Todd Usry, President of Breckenridge Brewery. “Its strikes the perfect balance of hearty flavors with tradition and cheer.”

Fully embracing the giving spirit of the season, Breckenridge Brewery does not stop at just one option when it comes to Holiday Ale releases. Holidale begins with the same base beer as Christmas Ale, but this batch spends some time aging and maturing in whiskey barrels.  This treatment expands on the beer’s sensory experience by adding “toasted biscuit notes complemented by soft caramel sweetness and hints of oak and whiskey warmth.”  2016 marks the second year that this true holiday treat has been given expanded availability throughout Breckenridge’s national distribution area.

Christmas Ale and Holidale are both available from November through December.  Christmas Ale can be found in 6-packs and 12-packs of 12 oz. bottles, 5L mini-kegs, and on draft at craft beer establishments located in Florida and throughout the full distribution footprint of Breckenridge Brewery.  A bit more limited in availability, 22 oz. bottles of Holidale can be picked up in select markets within the brewery’s distribution network.  Secure your stash when you can because both of these brews are sure to be holiday hits once again in 2016.  Prost!