Ciderboys Cider Co. (Stevens Point, Wisconsin) has officially announced that it will begin the Seasonal Release of Pineapple Hula in June 2020.

Pineapple Hula is a Hard Cider that has a “refreshing sweet tart flavor alive with the inspired pairing of apple and screaming yellow pineapple.” Coming in at a light and easy-drinking 5% ABV, Pineapple Hula is guaranteed to “transport [you] to the beach” every time you pop the cap on a bottle.

Pineapple Hula officially returned in early June and is scheduled to hang around through August 2020. You can expect to find this Seasonal offering available in 6-packs of 12 oz. bottles at select cider-friendly establishments located in Alabama, Florida, Wisconsin and throughout the rest of Ciderboys’ distribution territory.  Prost! 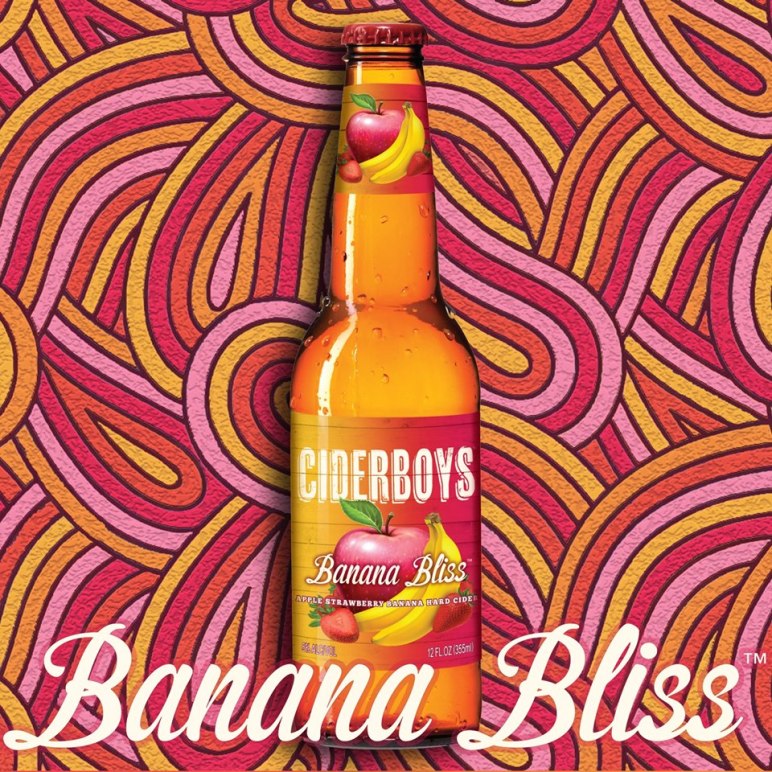 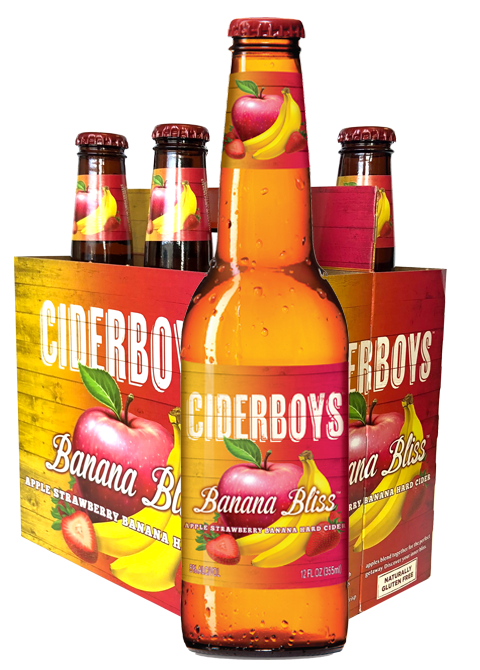 Ciderboys Cider Co. (Stevens Point, Wisconsin) has officially announced that Banana Bliss, an Apple Strawberry Banana Hard Cider, will arrive in October 2019 as the newest innovative release to come out of the cidery’s Fruitful Pairings Series.

Developed so that “consumers can relive summer vibes all fall long,” Banana Bliss is a “first of its kind” Hard Cider featuring a “balanced combination of natural Strawberry and Banana, which [pairs] wonderfully with the apple goodness Ciderboys is known for.” Weighing in at a smooth-sipping 5% ABV, Banana Bliss is like a smoothie in cider form.

“The pairing of strawberry and banana is classic, and we were ready to put our spin on it with hard cider,” said Julie Birrenkott, Ciderboys’ Marketing Director. “The pairing is so refreshing, whether you’re drinking it on a warm fall day picking apples or on a cool night by the campfire. Some might say Banana Bliss is an ‘appealing’ opportunity we couldn’t pass up.”

Banana Bliss is rolling out now and will be hanging around as long as supplies last this fall (2019).  You can expect to find this Limited Release available in 6-packs of 12 oz. bottles at cider-friendly establishments located in Alabama, Florida, Wisconsin and throughout the rest of Ciderboys’ distribution territory.  Prost! 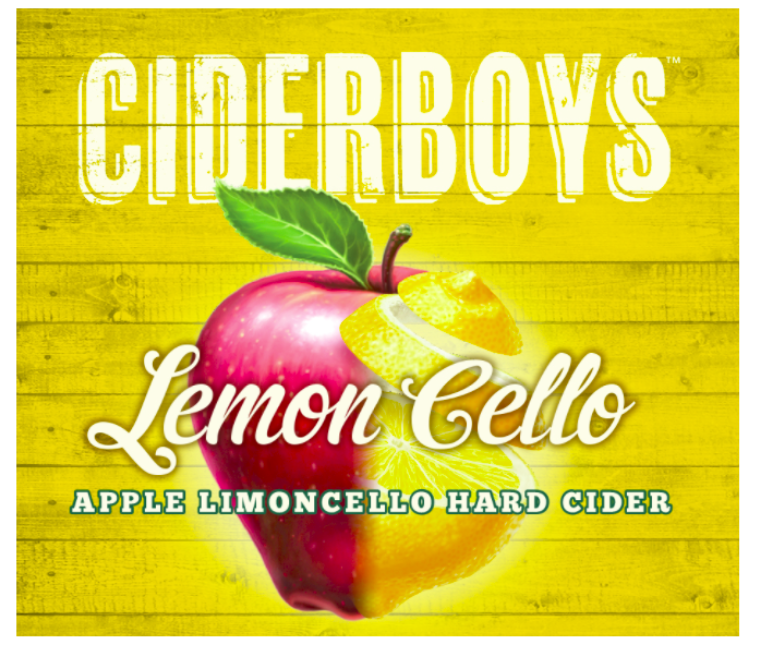 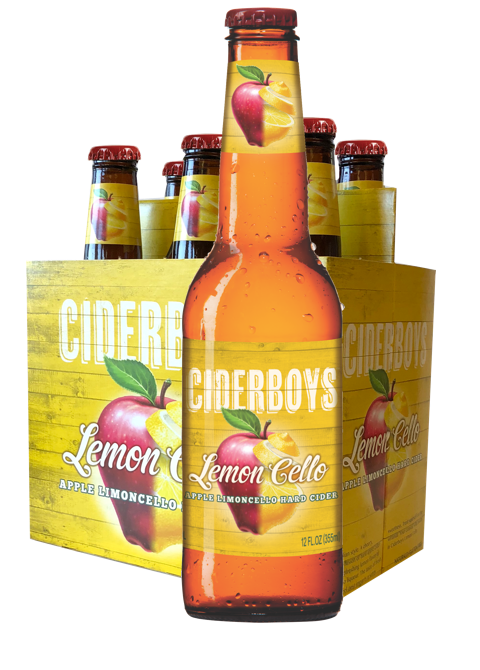 Inspired by the bright yellow limoncello liqueur that is so popular in southern Italy, Lemon Cello is a Hard Cider that balances “two different natural lemon flavors derived from fresh Florida lemons — one for aroma and the other for the flavor —” with the sweetness from the base apple cider.  Described by the cidery’s quality team as “not too tart but not too sweet either”, Lemon Cello (5% ABV) “is abundantly aromatic and overflowing with a sweet, zesty fresh-lemon flavor.”

“Consumer response to Ciderboys Lemon Cello has been amazing so far,” said Julie Birrenkott, Director of Marketing for Ciderboys. “Most people like sweet lemon-flavored beverages and foods, and Lemon Cello’s robust citrus aroma and flavor combined with the sweetness of our apple cider makes for a truly refreshing drink. It’s no surprise that it has been well-received in the marketplace.”

Lemon Cello was introduced in late September 2018 and will be available as long as supplies last.  You can expect to find this Limited Release offering available in 6-packs of 12 oz. bottles and on draft at select cider-friendly establishments located in Alabama, Florida, Wisconsin and throughout the rest of Ciderboys’ distribution footprint.  Prost! 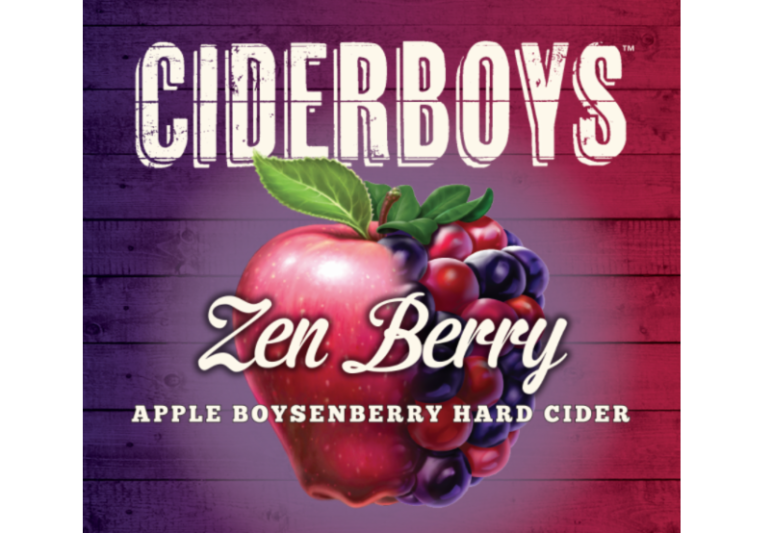 The folks at Ciderboys created Zen Berry by combining “the sweetness of apple cider with the fruity tartness of boysenberry, a hybrid of raspberry, European blackberry, and American dewberry first developed in California in the 1920s.”  With the help of those boysenberries, Zen Berry (5% ABV) comes together to be a deep maroon Hard Cider that is “[swirled] with handpicked apples to form a quenchable yin-yang” between sweet and tart.

“We offered Zen Berry on tap at the Point Brewery Pointoberfest on September 16 and the response was incredible,” she added. “If you like hard cider, you are going to love Ciderboys Zen Berry.”

Zen Berry is out now and will hang around as long as supplies last.  You can find this Limited Release offering available in 6-packs of 12 oz. bottles and on draft at cider-friendly establishments located in Alabama, Florida, Wisconsin and throughout the rest of Ciderboys’ 33-state distribution area.  Prost!