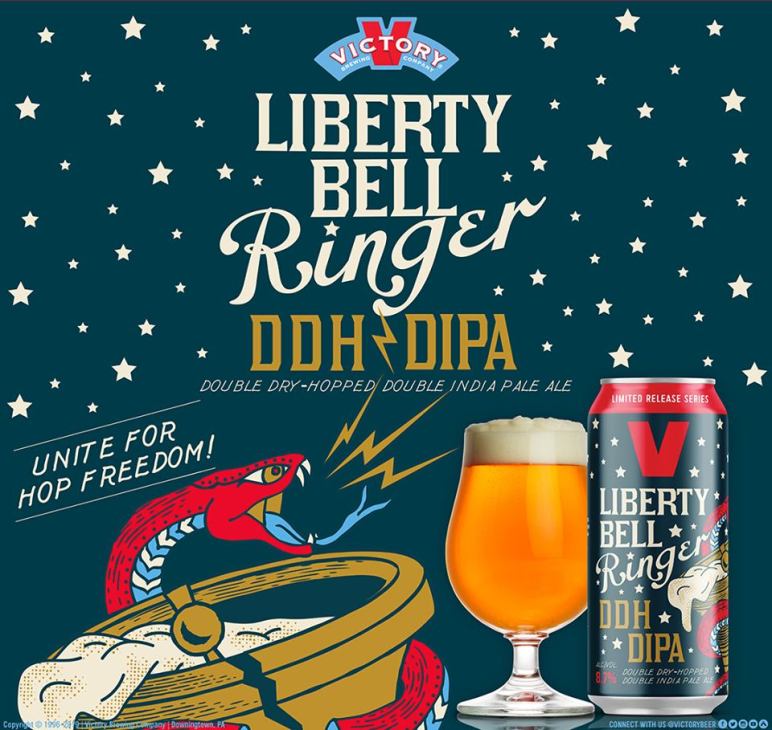 Victory Brewing Company (Downingtown, Pennsylvania) has officially announced that it will introduce Liberty Bell Ringer DDH DIPA as its latest Limited Release in the summer of 2019.

Brewed in honor of the Liberty Bell, Benjamin Franklin, generations of great brewers, and all the other awesome things to come out of Philadelphia, Pennsylvania; Liberty Bell Ringer is a double dry-hopped (DDH) Double India Pale Ale “packed with DOUBLE the hops, twice over,” so that it can “sing with massive tropical, fruity hop flavor and aroma.” Coming in at 8.7% ABV and 76 IBUs, Liberty Bell Ringer is “an IPA that earns the celebration of independence. Let it ring.”

Liberty Bell Ringer DDH DIPA is rolling out now and will hang around only as long as supplies last.  You can expect to find this Limited Release offering available in 4-packs of 16 oz. cans and on draft at select craft beer-friendly establishments located in Alabama, Florida, Pennsylvania and throughout the rest of Victory Brewing Company’s distribution area.  Prost!