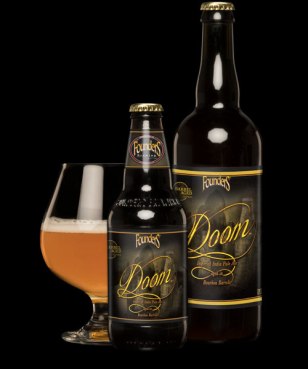 Founders Brewing Co. (Grand Rapids, Michigan) has announced that Doom Barrel-aged Imperial IPA will officially return in May to act as the next release in the brewery’s Barrel-Aged Series.

Last released in 2013 as a part of the Founders Backstage Series, Doom is set for a comeback in 2017 as the third release in the newly established Barrel-Aged Series, a limited lineup of “complex, world-class beers worthy of time in a barrel.”  To properly embody “a collision of worlds” in craft brewing, Doom starts with an Imperial India Pale Ale base filled with “intense hop character.”  This beer is then left to rest in Bourbon barrels so that it may pick up “warm vanilla and oak notes.”  The result is an incredibly complex Imperial IPA that is meant to be sipped and savored.

“Imperial IPA and barrel-aging – two of our greatest strengths coming together to create the masterpiece we call Doom,” said Co-Founder and President, Dave Engbers. “This is a huge beer with a big attitude. We are so happy to bring this beer back for those who have been vocal in asking for its return and we look forward to introduce it to those who haven’t yet had the opportunity to try it.”

The inaugural year for the Barrel-Aged Series has already seen the releases of Frootwood and KBS.  Doom will serve as the third release in the series, and Backwoods Bastard (November) will join two yet-to-be-announced beers to close it out later this year.

Doom Barrel-aged Imperial IPA will officially release in the Founders Brewing Co. taproom beginning on May 12.  Shortly thereafter, this limited release will then see distribution in 4-packs of 12 oz. bottles (suggested retail price of $14.99), 750 ml bottles (suggested retail price of 11.99 each), and on draft.  You can expect to find this one available at craft beer-focused retailers, bars and restaurants located in Alabama, Florida, Michigan and throughout the rest of the brewery’s distribution footprint.  Mark those calendars and get it while you can.  Prost!

One thought on “Founders Brewing Co. to Unleash Doom in May”