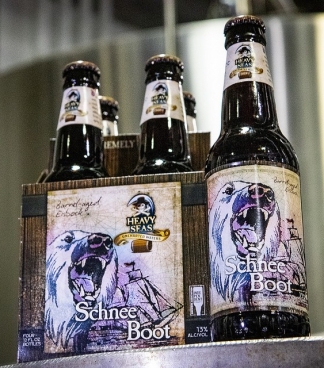 Heavy Seas Beer (Baltimore, Maryland) has officially announced that it will introduce Schnee Boot, an Eisbock aged in bourbon barrels, in November 2018 as the newest addition to the brewery’s Uncharted Waters Series.

Here to claim the distinction of being “the strongest beer . . .  ever created” by Heavy Seas Beer, Schnee Boot is a 13% ABV Eisbock that is “dark, malty, and roasty with hints of cocoa, vanilla, and dark fruits.  This beast of a lager gets additional complexity from bourbon barrel aging.”

Schnee Boot will debut in November and will stick around as long as supplies last.  You can expect to find this Limited Release offering available in 4-packs of 12 oz. bottles and on draft at select craft beer establishments located in Alabama, Florida, Maryland and throughout the rest of Heavy Seas Beer’s distribution footprint.  Prost!