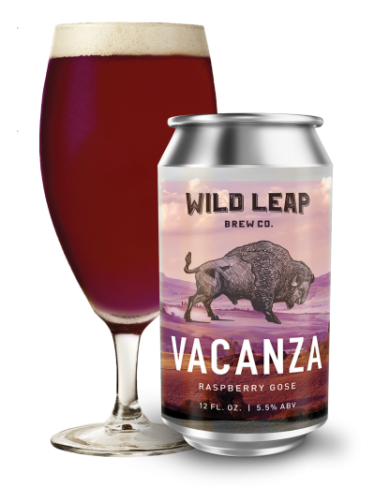 Wild Leap Brew Co. (LaGrange, Georgia) has officially announced that it will kick off its Vacanza Series of sour-style craft beers with the late April release of Vacanza Raspberry Gose.

Developed with “leisure” and “relaxation in mind”, Vacanza Raspberry Gose is a refreshing Gose-style Ale that has a “sweet, yet tart flavor profile” thanks to the addition of “over 500 pounds of fresh raspberries per batch.” This fruit-heavy recipe supplies Vacanza (5.5% ABV) with “a rich pink color, evidence of its freshness.”

“People have asked us to brew a sour-style beer from the day we opened,” shared Anthony Rodriguez, Co-founder and CEO of Wild Leap Brew Co. “With warm weather approaching, we felt like this was the perfect time to add one to our lineup.”

Vacanza Raspberry Gose is rolling out now and will hang around as long as supplies last.  You can expect to find this new Limited Release offering available in 12 oz. cans and on draft at craft beer-friendly establishments located within Wild Leap’s distribution footprint in Georgia.  Prost!

Release – Limited/Vacanza Series, late April 2019
Style – Gose
ABV – 5.5%
IBUs – 5
Added Ingredients – Salt & 500 lbs. of fresh raspberries per batch
Fun Fact – On Vacanza Raspberry Gose and the Vacanza Series: “With a brewing style and ABV that is designed for the warm weather approaching, it is important to point out that Wild Leap had relaxation in mind when brewing this beer. The name itself, Vacanza, is Italian for ‘vacation’ or ‘holiday’, while the tongue-in-cheek quote on the back of the can describes it as ‘brewed for those who take leisure very, very seriously.'”
Availability – 12 oz. cans & draft
Beer Finder – http://www.wildleap.com/beer-finder/