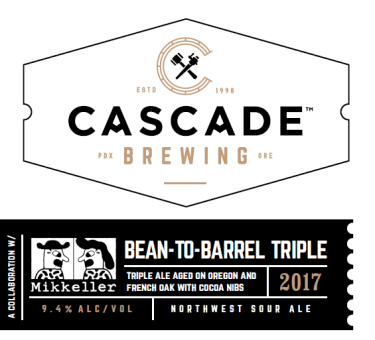 Cascade Brewing (Portland, Oregon) has officially announced that it will release Bean-to-Barrel Triple, a Limited Release collaboration with Mikkeller (Copenhagen, Denmark), on May 10.

Meant to celebrate the “‘bean-to-bar’ chocolate-making method” of Bean Geeks Craft Chocolate in Copenhagen, Bean-to-Barrel “features a blend of barrel and foudre aged sour triple ales with toasted Oregon and French oak and a late infusion of cocoa nibs sourced from Bean Geeks.” Coming in at 9.4% ABV, Bean-to-Barrel Triple supplies its drinker with “aromas of dark chocolate, vanilla and toasted oak sugars combined with the light pear and citrus fruit notes of the sour triple.”

“We’ve had the great privilege to work with many amazing, cutting edge breweries on collaborative efforts in the past. Needless to say we jumped at the opportunity to work with Mikkeller, long considered to be an innovative force that pushes the boundaries of existing beer styles with intense flavor and ingredient combinations,” explained Norm Stokes, Cascade Brewing Cellar Manager. “Bean-to-Barrel Triple was born of this collaboration, and it was a memorable experience to work together to come up with a beer that incorporates the complexity of Oregon oak with the rich flavor of cocoa nibs sourced from Bean Geeks chocolate.”

Bean-to-Barrel Triple will officially debut in Cascade’s two Portland pubs on May 10 and is expected to enter distribution at or around that date as well.  You can expect to find this Limited Release offering available in 500ml bottles and on draft at select craft beer-focused establishments located in Alabama, Florida, Oregon and throughout the rest of Cascade Brewing’s distribution area.  Bean-to-Barrel will also make its European debut on draft on May 10 at the Mikkeller Beer Celebration Copenhagen (MBCC) in Denmark.  Prost!