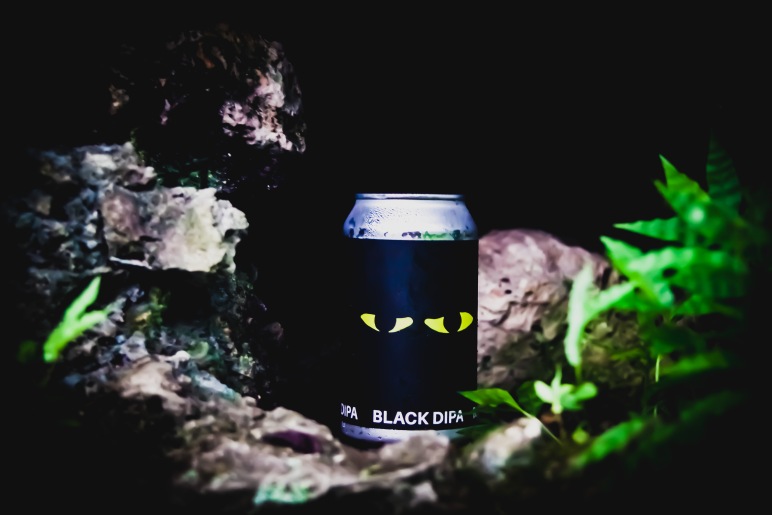 For this edition of Tasting Notes, we turn ourselves over to the dark side of IPAs thanks to the influence of Night Creep DIPA from Iron Fist Brewing Company (Vista, California).

Developed to serve as a stark contrast from the three IPAs already in Iron Fist’s Core lineup as well as in the always IPA-saturated beer scene in the San Diego area, Night Creep is a “dark and different” Black Double India Pale Ale that utilizes an “unusual” yeast strain that “[brings] a distinctive flavor to a DIPA.”  To round off the recipe, the brewing team at Iron Fist used “choice kiln roasted malt [to impart] not only blackness but a mild toast undertone” while a “blend of earthy dank hops and overtones of citrus, floral and pine hops” provide balance. Night Creep comes in at a sneaky 8.5% ABV and 70 IBUs.

Night Creep was released at the start of August as the seventh offering to come out of Iron Fist’s 2019 Small Batch Experiments Series.  This Limited Release offering is available as long as supplies last in limited-edition 12 oz. cans and on draft at Iron Fist Brewing Company’s Vista and Barrio Logan taprooms.

With all that background information now out of the way, what do you say we shed a little more light on Night Creep with some Tasting Notes?

Appearance:  Night Creep pours a near black, incredibly dark brown in color and wears just over a finger of light tan foam. When held to direct light, the cola-like brown pushes through a bit more but the darkness maintains its grip for the most part. The beer is completely opaque, providing no hint at the level of carbonation within.  Head retention is good, falling slowly to a chunky ring that is not at all shy about its ability to coat the glass with wide bands of lace.

Aroma:  The aromatics open with a tempting presence of toasted grain and high-quality dark chocolate.  The hops then cozy up to this malt presence, enveloping it with notes of resinous pine, grapefruit, tangerine, and a mix of soft floral and herbal tones.  All of this occurs without any one note overwhelming the other. There is nothing but soft, cautious harmony here and it is glorious.

Taste: An herbaceous, dank hop presence flawlessly executes a quick strike on the palate, but it is quickly tamed by toasty, roasty malt notes, a touch of bittersweet dark chocolate and a wisp of earthiness/wood.  A delicate floral quality, a pinch of grapefruit zest, and just the right amount of pine then join forces to leave memories of old-school Double IPAs behind in the finish.

Mouthfeel: Medium to full in body with a medium carbonation, this Black DIPA has plenty of weight to it but still finishes incredibly clean.  The balance here is sneaky good, allowing hop notes to shine brightly but without too much bitterness or countering sweetness.  The 8.5% ABV is a total non-factor, allowing the experience to remain smooth and easy drinking. The aftertaste is just a touch of pine and grapefruit.

Final Thoughts:  In our experience, Black IPAs tend to read a lot like hoppy Porters.  Sure, there is a hint of that here, but Night Creep finds a way to slip away and stand apart from the other beers that share this style designation.  The hop notes are beautifully pronounced and seem to sit above its toasty, dark malts . . . but then you take a moment to think about the previous sip and realize that the bitterness is not at all aggressive yet there are also not any exaggerated levels of malty sweetness.  The balance allows the beer to subtly move beyond the questioning of “is this a Double IPA or is it a Porter?” by cooling declaring “this is what a Black IPA should be.”

Beyond that, Night Creep just might be one of the cleanest beers we have ever had.  We cannot figure out if it is due to the chosen yeast, the brewery’s approach to the hop additions, the malt bill or just a combination of all three, but each note has its time to shine and then just gracefully fades from the palate in time for the next sip.  Nothing is muddled, overwhelming or confounding.  Every note is just allowed to be distinct, clear and clean.

After reviewing everything mentioned in the previous two paragraphs, we are incredibly confident in declaring that Night Creep is easily the best Black IPA/DIPA we have had, and it should be considered a benchmark beer for the style.  It is that damn good, and you need to check it out while you still have the chance.  Prost!