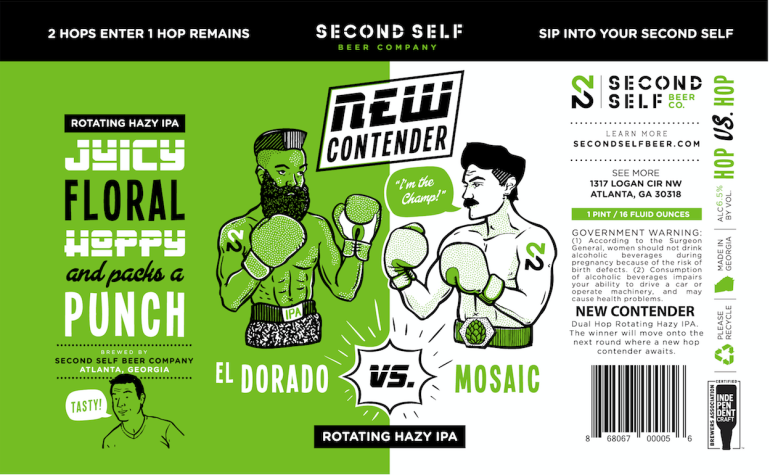 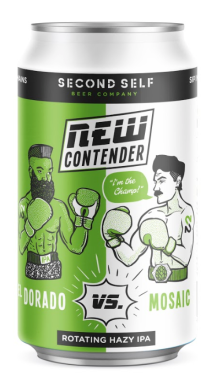 Second Self Beer Company (Atlanta, Georgia) has officially announced that it will introduce New Contender, a new series of Hazy IPAs, on October 12 with the Limited Release of El Dorado vs. Mosaic.

Inspired by Second Self’s appreciation for classic fighting video games, New Contender is “a creative spin on the hazy IPA by using a new two-hop blend each time it’s brewed, resulting in original flavor combinations with each release.”  Each “round” will have two hops “‘battle it out’ to see which remains for the next release.”  The winner of each release will be chosen by the Second Self team and the “vanquished hop” will be replaced by a “New Contender” for the next release in the series.

New Contender – El Dorado vs. Mosaic, the inaugural release in the series, is a Hazy India Pale Ale that pits the “tropical fruit flavors” of El Dorado hops against Mosaic’s “flavors of mango, pine, citrus and herbs and aromas of tropical and stone fruit.”**

“We love the creativity of our team, and when Head Brewer Austin Brumley came to me with this idea, I knew we had to run with it,” says Second Self Co-Founder and Beer Architect, Jason Santamaria. “We’re excited to experiment with different hops in ways we have not before. I can’t wait to see how the beer community responds to it.”

New Contender – El Dorado vs. Mosaic will debut at Second Self’s Five Year Anniversary Party at their Westside Taproom (1317 Logan Circle NW | Atlanta, Georgia) on October 12.  Future New Contender releases will be available for purchase in 16 oz. cans at Second Self and at select craft beer-friendly establishments located within the brewery’s distribution footprint in Georgia and South Carolina. Prost!

Release – Limited/New Contender Series; October 12, 2019
Style – Hazy India Pale Ale
ABV – 6.5%
IBUs – ???
Featured Hops – El Dorado & Mosaic
Fun Fact – “Keith Rein, design specialist at Salt and Paper House in Athens, Georgia, created the cheeky artwork in addition to a running list of other labels he has made for Second Self, such as the more recent releases of their cocktail-inspired series and Golden Blonde.”