Second Self Beer Company (Atlanta, Georgia) has officially announced that it will begin the Limited Release of Dad Made Breakfast, a Pastry Stout with Oats and Coffee, in mid-February 2020.

Arriving as the first release in a three-part Pastry Stout Series that will introduce new flavors and brewing techniques, Dad Made Breakfast is a “high gravity, non-adjunct” American Stout brewed with oats, coffee and roasted malts, Specifically developed to be a vegan product, Dad Made Breakfast (9% ABV) cleverly mimics the Pastry Stout experience while “containing zero lactose, artificial ingredients or sweeteners.”

“At Second Self, it’s a constant goal of ours to release new offerings that appeal to a wider audience. For that reason, we’re excited to be releasing a vegan stout with Dad Made Breakfast.” says Second Self Co-Founder and Beer Architect, Jason Santamaria. “For the two beers following in the series, we’ll be experimenting with new flavor introductions and brewing techniques.”

Dad Made Breakfast is rolling out now and will hang around only as long as supplies last.  You can expect to find this Limited Release available in 16 oz. cans and on draft at Second Self’s Westside Tasting Room (1317 Logan Circle NW | Atlanta, Georgia) and at select craft beer-focused establishments located within the brewery’s distribution footprint in Alabama, Georgia and South Carolina.  Prost!

Vital Information for Dad Made Breakfast from Second Self Beer Company

Second Self Beer Company (Atlanta, Georgia) has officially announced that it will introduce New Contender, a new series of Hazy IPAs, on October 12 with the Limited Release of El Dorado vs. Mosaic.

Inspired by Second Self’s appreciation for classic fighting video games, New Contender is “a creative spin on the hazy IPA by using a new two-hop blend each time it’s brewed, resulting in original flavor combinations with each release.”  Each “round” will have two hops “‘battle it out’ to see which remains for the next release.”  The winner of each release will be chosen by the Second Self team and the “vanquished hop” will be replaced by a “New Contender” for the next release in the series.

New Contender – El Dorado vs. Mosaic, the inaugural release in the series, is a Hazy India Pale Ale that pits the “tropical fruit flavors” of El Dorado hops against Mosaic’s “flavors of mango, pine, citrus and herbs and aromas of tropical and stone fruit.”**

“We love the creativity of our team, and when Head Brewer Austin Brumley came to me with this idea, I knew we had to run with it,” says Second Self Co-Founder and Beer Architect, Jason Santamaria. “We’re excited to experiment with different hops in ways we have not before. I can’t wait to see how the beer community responds to it.”

New Contender – El Dorado vs. Mosaic will debut at Second Self’s Five Year Anniversary Party at their Westside Taproom (1317 Logan Circle NW | Atlanta, Georgia) on October 12.  Future New Contender releases will be available for purchase in 16 oz. cans at Second Self and at select craft beer-friendly establishments located within the brewery’s distribution footprint in Georgia and South Carolina. Prost!

Release – Limited/New Contender Series; October 12, 2019
Style – Hazy India Pale Ale
ABV – 6.5%
IBUs – ???
Featured Hops – El Dorado & Mosaic
Fun Fact – “Keith Rein, design specialist at Salt and Paper House in Athens, Georgia, created the cheeky artwork in addition to a running list of other labels he has made for Second Self, such as the more recent releases of their cocktail-inspired series and Golden Blonde.” 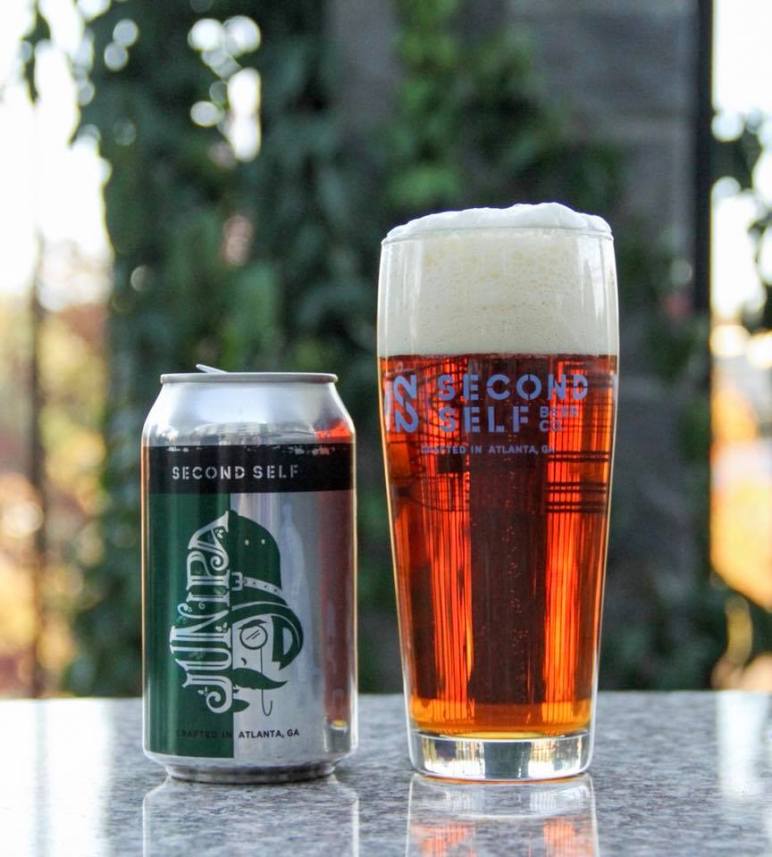 Second Self Beer Company (Atlanta, Georgia) has announced that the newly reformulated Junipa will officially return in November to serve as the brewery’s cold weather Seasonal.

Newly tweaked to even more closely mimic “the classic flavors of gin”, Junipa is a Spruce Beer “brewed with citrusy Amarillo and Cascade hops, spruce tips, juniper, and rosemary, and then dry-hopped with aromatics.”  This clever combination of hops, juniper and aromatics produces a 6.4% ABV Junipa that is reminiscent of “a more citrusy gin.”

Junipa will return in November 2018 and is scheduled to stick around through February 2019.  You can expect to find this Seasonal Release available in 12 oz. cans and on draft at craft beer-friendly retailers, bars and restaurants located in Alabama, Georgia and South Carolina. Prost!

Vital Information for Junipa from Second Self Beer Company

Second Self Beer Company (Atlanta, Georgia) has announced that it is going old school on hop heads with the upcoming Limited Release of Make IPA Great Again.

Harkening back to the days before the IPA haze craze consumed the craft beer community, Make IPA Great Again is a “throwback double IPA” created by Second Self’s Co-founders Jason Santamaria and Chris Doyle “as an homage to the bitter and clear IPAs that inspired them to start brewing over a decade ago.”  With a “YUGE” hop bill jam-packed with Cascade, Centennial, Chinook and Simcoe hops, this ‘Murican Double IPA “has tremendous notes of pine, resin, covfefe and citrus with a bitter finish.” For a more eloquent, stately explanation of what you can expect from this beer, here’s the brewery’s full description for Make IPA Great Again (9% ABV, 111 IBUs):

Your milkshake pasty stout IPAs are FAKE NEWS!!. This bitter beer is DANK, PINEY, RESINY, and clear; just like the RETRO forgotten beers of this country. We make sure it has a tremendous flavor in a bigly tariffed aluminum tall boy! I have to thank our employees for their great jerb Putin in hard hours to make this magnificent beer.”

Make IPA Great Again will debut on April 28 in Second Self’s Westside taproom and distribution will follow shortly after that release.  You can expect to find this Limited Release available in 16 oz. cans and on draft at select craft beer establishments located within Second Self’s distribution footprint in Alabama and Georgia.  Prost!

Brewed to mimic the characteristics of the classic Southern dessert we all know as red velvet cake, Bleeding Heart (6.9% ABV) is an Amber Ale brewed with cocoa to add “color and bitterness more than flavor” and vanilla to act as the “icing on top.” Skillfully added in just the right amounts, these ingredients blend with the beer’s overall recipe to strike a beautiful “balance between sweet, malty flavors and hops.”

Bleeding Heart is officially available now and will hang around through the month of March.  You can expect to find this Seasonal release available in 12 oz. cans and on draft at craft beer establishments located within Second Self’s distribution footprint in Alabama and Georgia.  Prost!

Vital Information for Bleeding Heart from Second Self Beer Company

Second Self Beer Company (Atlanta, Georgia) has officially announced the release of Triforce IPA as the brewery’s newest Year-Round offering.

With inspiration sourced from an “iconic video game”, the brewers at Second Self have created Triforce IPA to “embody the sacred relic’s three pieces: power, courage and wisdom.”  To achieve this lofty goal, this slightly hazy IPA is brewed with its own “triforce of malts (oats, wheat and barley) and hops (Mosaic, Amarillo and Cascade).”  This trifecta of threes results in a 6.1% ABV, 45 IBU Triforce IPA that possesses “the aroma and flavor of papaya, mango and other tropical fruits, with a soft, flavorful mouthfeel to balance this truly inspired beer.”

Triforce IPA is officially available now in 6-packs of 12 oz. cans and on draft.  You can find this Year-Round offering at craft beer-focused retailers, bars and restaurants located throughout Second Self Beer Company’s distribution area in Alabama and Georgia.  Prost!

Vital Information for Triforce IPA from Second Self Beer Company

Second Self Beer Company (Atlanta, Georgia) has announced that the 2017 batch of Olde Oyl will officially debut at the brewery on Black Friday, November 24.

Arriving just in time to take on those colder temperatures, Olde Oyl is a Russian Imperial Oatmeal Coffee Stout that is “brewed seasonally with malt and oats for a rich body and robust aroma.”  To achieve just the right amount of coffee presence, the brewers at Second Self “[incorporate] custom-roasted coffee from East Pole Coffee Co., a specialty coffee roaster based in Atlanta’s Armour Yards development between Buckhead and Midtown.”  Hearty and hefty, the 11% ABV Olde Oyl comes together to provide a warming experience that boasts “a nice roasty taste with a smooth coffee finish.”

Olde Oyl will make its first appearance of the year at Second Self’s Black Friday Extravaganza event on Nov. 24th from 1 p.m. to 9 p.m. Olde Oyl will be available in 16 oz. cans exclusively in the brewery’s taproom, but this Limited Seasonal Release will see distribution as a draft-only offering to select beer establishments located in Alabama and Georgia.  You can expect Olde Oyl to pour through January 2018. Prost!

Vital Information for Olde Oyl from Second Self Beer Company 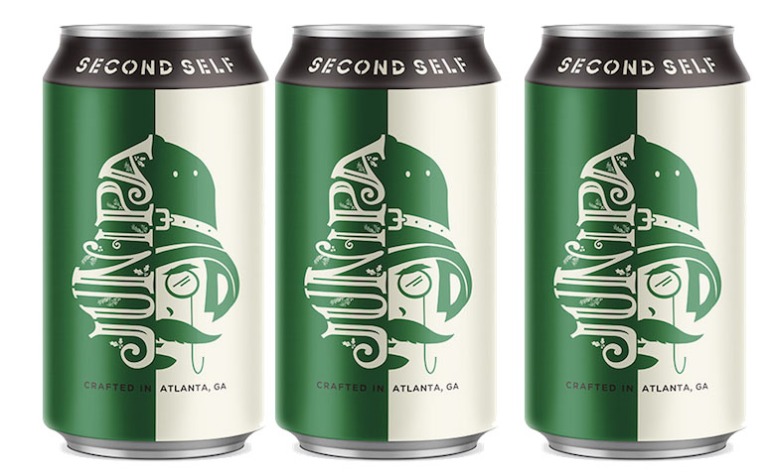 Second Self Beer Company (Atlanta, Georgia) has announced that it will be tackling this year’s winter months with the Seasonal release of JunIPA.

Inspired by the comforting and refreshing botanicals found in gin, Second Self Beer Company’s seasonal favorite JunIPA is an American India Pale Ale that is “brewed with citrusy Amarillo and Cascade hops plus juniper berries, then ‘dry-hopped’ with juniper and rosemary.”  Reminiscent of “a more citrusy gin”, this 6.4% ABV, 43 IBU IPA pairs beautifully with a southern winter’s “cool, crisp weather.”

JunIPA is available now and will be hanging around through the month of February 2018.  You can find this Seasonal offering in 12 oz. cans and on draft at craft beer establishments located within Second Self Beer Company’s distribution footprint in Georgia.  Prost!

Vital Information for JunIPA from Second Self Beer Company

Second Self Beer Company (Atlanta, Georgia) recently announced that it will recognize the 47th annual Atlanta Pride Festival by having cans of their A.T.aLe wear limited-edition, rainbow-print packaging during the month of October.

If you live in the metro Atlanta area, you might notice Second Self Beer Company’s A.T.aLe rockin’ some rainbow-print packaging this month (pictured above).  This limited-edition look is the brewery’s way of showing support for their city’s LGBTQ community as they celebrate the 47th annual Atlanta Pride Festival on October 13-15.

For those you who are not familiar with the beer, A.T.aLe is a “CRISP, CLEAN, REFRESHING” American Pale Ale that comes in at a quaffable 5.7% ABV and 42 IBUs. Simple and straightforward, A.T.aLe is meant to be an easy-drinking Atlanta Ale that “is the beer you want to drink when you just want to drink a beer.”

The rainbow-print A.T.aLe cans made their official debut at Second Self’s 3-Year Anniversary Party on October 7, and they will be hanging around throughout the month of October.  If you wish to track some down, these 6-packs of 12 oz. cans are available “at the [Second Self] taproom and in stores and shops across metro Atlanta.”  Prost!

Vital Information for A.T.aLe from Second Self Beer Company 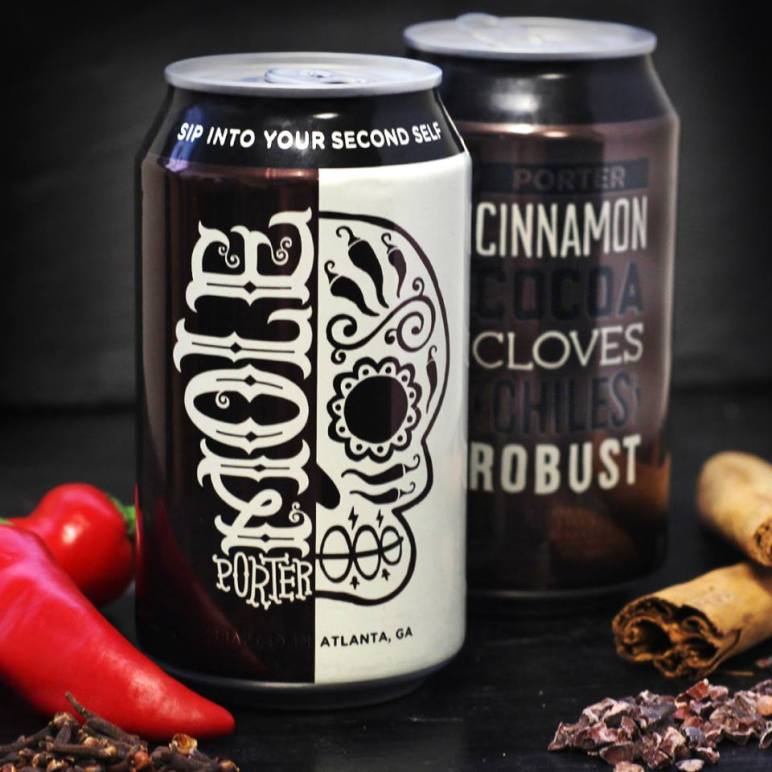 Inspired by Co-founder Jason Santamaria’s family recipe for Oaxacan Christmas molé sauce, Second Self Beer Company’s Molé Porter is a Robust Porter “brewed with Guajillo, Pasilla, and Chipotle chilies, cinnamon, cloves, and cocoa nibs.” The inclusion of Guajillo chilies is new this year, giving this iteration of Molé Porter (6.5% ABV) “a more robust and ever so slightly spicier flavor.”

Molé Porter is available as of September 1 and will be hanging around through February 2018.  You can expect to find this fan-favorite Seasonal available in 6-packs of 12 oz. cans and on draft at craft beer establishments located within Second Self Beer Company’s distribution footprint in Alabama and Georgia.  Prost!

Vital Information for Molé Porter from Second Self Beer Company