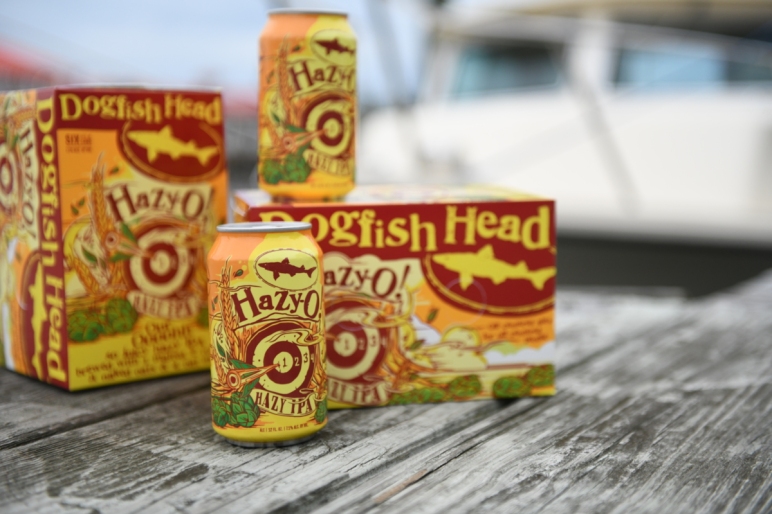 Carefully concocted to “[highlight] the magic found at the intersection of two unique, but unexpectedly complementary trends” – Hazy IPAs and Oat Milk, Hazy-O! is a Hazy/Juicy India Pale Ale “brewed with four types of oats – malted oats, rolled oats, naked oats and oat milk” from Elmhurst 1925 – and “liberally dry-hopped with hop varieties that deliver an abundance of tropical notes, including citrus, mango and pineapple.” Coming in at 7.1% ABV, the “sumptuous, full-bodied” Hazy-O! comes together to be “a hop-forward beer that is smooth and refreshing.”

“While Hazy-O! features a bunch of high-quality culinary ingredients, it’s the oats that are really the star of the show,” said Sam Calagione, Dogfish Head Founder & Brewer. “Each of the oat formats used in Hazy-O! provides a unique characteristic to the beer. The malted oats offer a delicate malty sweetness; the rolled oats contribute a dense haze; the naked oats provide a subtle toasty, caramel character; and the piece de resistance, oat milk, creates a silky soft mouthfeel that makes Hazy-O! drink like a 5% ABV session sipper, instead of the 7.1% ABV powerhouse that it is. This foundation-of-four oat formats creates a target, allowing the beer’s bright and juicy hops to hit the flavorful bullseye.”

“When we heard the team at Dogfish Head wanted to launch an oat milk IPA, we jumped at the chance to partner with them,” said Heba Mahmoud, VP of Marketing at Elmhurst 1925. “Surprisingly enough, there was a natural synergy between the two brands. We’re all about using clean ingredients and maximizing the nutritional value and taste profile of plant-based offerings. We’re thrilled to help bring this new beverage to those seeking options they don’t have to question when it comes to ingredients and taste. We can’t wait to be a part of special moments among friends and families as they sip and create lasting memories.”

Hazy-O! is available now in 6-packs of 12 oz. cans and on draft. You can expect to find this new Year-Round offering at craft beer-focused establishments located in Alabama, Florida, Delaware and throughout the rest of Dogfish Head’s distribution network. Prost!