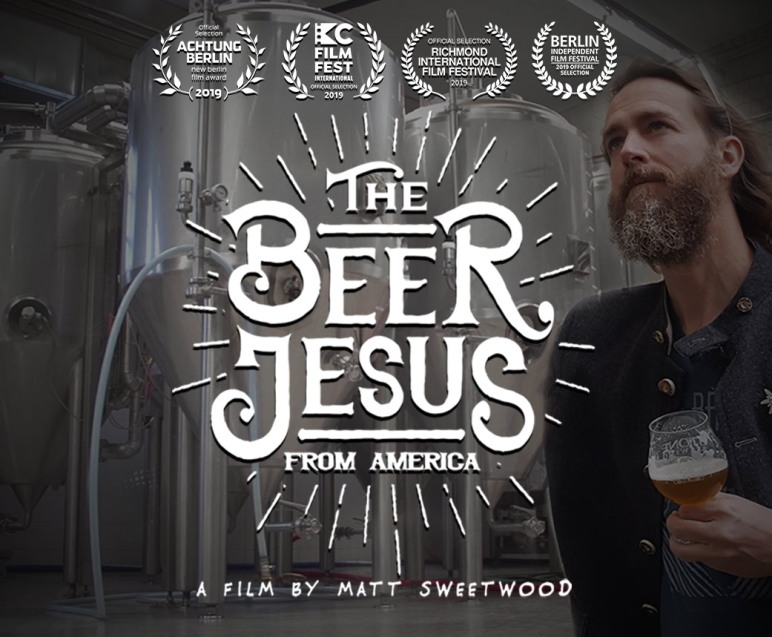 Stone Brewing (Escondido, California) has officially announced that it will hold a virtual screening of The Beer Jesus from America – a live event featuring commentary and a Q&A with Stone Brewing Co-founder Greg Koch and filmmaker Matt Sweetwood of Sweetwood Films – at 6 p.m. (PST) on Friday, May 8.

To give their fans a little something different to participate in during this time of social distancing, Stone Brewing is taking to its YouTube Channel on May 8 to provide a free screening of The Beer Jesus from America, a 104-minute documentary that follows Co-founder Greg Koch (a.k.a. “Beer Jesus”) and Stone Brewing as they set off on the “often tumultuous journey to becoming the first American independent craft brewery to build, own and operate its own brewery in Europe.” This film documents four years at Stone Brewing – Berlin and the brewery’s overall “mission to inspire a craft beer revolution in Germany.”

While the documentary is airing, Greg Koch and Matt Sweetwood will both be on hand to “livestream commentary during the film, sharing their experiences, talk beer and enjoy a few tasty selections with the beloved craft beer community.” Once the film is over, Koch and Sweetwood will open things up for a fun and interactive Q&A session moderated by respected Emmy nominated film critic Scott Mantz.

Willing to risk millions on a dream to become the first American craft brewer to build, own and operate their own brewery in Europe, and also create an international craft brewing destination, Stone Brewing co-founder Greg Koch may have made the biggest mistake of his career!  Against seemingly insurmountable odds, the man who’s been nicknamed “the Beer Jesus from America” pushes on with passion and tenacity to join and help move forward Europe’s newly budding craft brewing scene as a revolutionary alternative to cheap industrial beer. Over four years filmmaker Matt Sweetwood (Beerland) captures this historic birth of an American brewery in Berlin, in a story of culture clashes, broken promises and a bottomless beer glass of unexpected challenges.

You can join the live screening event for The Beer Jesus from America by visiting Stone Brewing’s YouTube Channel at 6 p.m. (PST) on May 8. The event is completely free and is sure give us all a fun way to escape the realities of today for a couple hours by providing the pub/taproom experience we all miss as the hosts, attendees and participants sit around and discuss beer and movies for a while. We hope to raise a socially-distanced pint with you all on May 8.  Prost!

Stone Brewing (Escondido, California) has announced that The Beer Jesus from America, a new documentary independently produced by director Matt Sweetwood of Sweetwood Films, has officially made its public debut and is available now for streaming on Prime Video and Vimeo On Demand.

Bearing a title inspired by a 2014 article in the Berliner Kurier – a German tabloid newspaper – where Greg Koch, Co-founder of Stone Brewing, was “somewhat [cynically]” referred to as “Der Bier Jesus aus Amerika,” The Beer Jesus from America is a 104-minute film that follows Koch and Stone Brewing as they set off on the “often tumultuous journey to becoming the first American independent craft brewery to build, own and operate its own brewery in Europe.”  This film documents four years at Stone Brewing – Berlin and the brewery’s overall “mission to inspire a craft beer revolution in Germany.”

“When we set out to build the first American independent Craft Brewery in Europe, we did so with that same spark – that passion and intensity – that drove us to offer something different in the US back in 1996,” explained Koch. “This film captures the trials, challenges, roadblocks… and occasional triumphs of the project, but on a deeper level, it’s a story of following your heart and challenging convention.”

Stone Brewing’s rock ‘n’ roll co-founder, Greg Koch, who was nicknamed “Beer Jesus” by a Berlin tabloid newspaper, is taking his business to Germany on a mission to oppose the most beloved industrial beer in the world and join Europe’s craft beer revolution. Will he succeed? Greg must first challenge the established beer culture in a country where brewing has been restricted by the infamous 500-year-old beer Purity Law. However, in his quest to fight mass market beer, it turns out that Greg has even bigger obstacles to overcome, from struggles with bureaucracy to cultural differences and stubborn traditionalism.

Directed by Matt Sweetwood (Beerland, Forgetting Dad), “The Beer Jesus From America” takes us on a journey with Greg as he builds his European craft brewery from scratch in a sleepy corner of Berlin, Germany, where he faces seemingly endless challenges that threaten to end the entire project. Over four years, Matt captures the unexpected twists in a story full of blood, sweat, tears, and beers!

This is a story not just about the birth of a brewery and the fight against mass market beer, it’s about an inspiring character who understands the importance of sticking to your dreams, no matter how crazy they might seem.

The Beer Jesus from America made its debut on Prime Video and Vimeo On Demand this week . A commemorative DVD will be available for purchase in Stone Brewing’s online store in 2020. Prost!