Marker 48 Brewing (Weeki Wachee, Florida) has officially announced that it will begin the 2020 iteration of its popular Small Batch Beer Passport program on Wednesday, February 12.

Established to be a fun way to celebrate innovation, imagination and experimentation at the brewery, Marker 48’s Small Batch Beer Passport is an annual promotion that allows their fans to enjoy 48 weeks of “unique one-off beers” for the chance to win one of three prizes at the end of the year.  Developed by Marker 48’s brewers and select guest brewers, new small-batch beers will release each week (beginning February 12) and the offerings will include “everything from sours to barrel-aged beers, and many styles in between.”

“It’s allowed our brewers to experiment with brewing all while exposing our beer fans to new styles that they may not have otherwise tried,” said Tina Ryman, Marker 48 co-founder and co-owner, and “Happiness Bestower in Charge.”

Anyone visiting the brewery can order and enjoy these small batch brews, but you must purchase a Small Batch Beer Passport to participate in the promotion.  A very limited amount of passport books is available to purchase in Marker 48 Brewing’s taproom.  Each Small Batch Beer Passport costs $100 and includes “one FREE small-batch beer per passport holder per week, while supplies last.”  Passport holders will receive a stamp in their book for each unique small batch beer enjoyed for the chance to win one of these amazing prizes (winners will be notified when the program ends in early 2021):

In addition to being entered into the contest, passport holder who collect all 48 stamps will receive “an exclusive Marker 48 Small Batch Beer shirt AND a special 20 oz. glass to be kept in the brewery to receive pours of core beers for the same price as 16 oz. beers.”

Small Batch Beer Passports are available now at Marker 48 Brewing and the first beer of the program will be tapped on February 12.  The fact that you get 48 beers throughout the year for just $100 should be reason enough for you to consider participating in the 2020 Small Batch Beer Program. Throw in the chance to win one of the three great prizes listed above, and then this promotion becomes a cannot miss opportunity for beer lovers living anywhere near Marker 48 Brewing. Just make sure you secure you Small Batch Beer Passport before they sell out.  Prost! 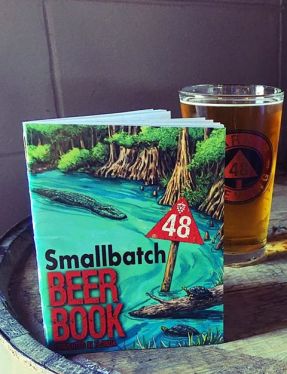 Marker 48 Brewing (Weeki Wachee, Florida) has officially announced the launch of their Smallbatch Beer Program, a new promotion that will feature a new one-off beer during each of the remaining 48 weeks of 2017.

Starting this week, Marker 48 Brewing will begin tapping a series of unique brews and selling a limited number of Smallbatch Beer Books as a part of their Smallbatch Beer Program.  Not only will this promotion allow you to enjoy a new beer each week for the rest of the year, but it also gives you chance to win some amazing prizes.  There are quite a few moving parts to the Smallbatch Beer Program, so let’s break it all down:

The Beers of the Smallbatch Beer Program – The brewers at Marker 48 Brewing and a select group of guest brewers have signed on to create a series of small-batch beers that will be tapped at the brewery each week for the rest of 2017.  These 48 beers are meant to be an exploration of “creative and experimental brewing — everything from sours to barrel-aged beers, and many styles in between.”  Anyone who visits Marker 48 Brewing can order these limited offerings, but those that commit to the Smallbatch Beer Program will have the chance to win some cool prizes at the end of the year.

The Prizes of the Smallbatch Beer Program – “At the end of the year, those individuals who have all 48 stamps will get an exclusive Marker 48 Smallbatch Beer shirt AND a special 20 oz. glass to be kept in the brewery to receive core beers for the same price as 16 oz. beers.

Depending on the number of stamps required, book holders will also be qualified to win end-of-the-year grand prizes.”

In order to qualify for the prizes above, you must purchase a Smallbatch Beer Book.

The plan is for the majority of the Smallbatch Beers to be tapped each Wednesday in Marker 48 Brewing’s tasting room.  With that said, things do come up in the brewing process and those beers with “special treatments or other special brewing techniques may be released another day.”  Your best bet is to check Marker 48’s Facebook page or Twitter account each week for up-to-date news concerning each release.  The brewery expects each release to be available for a couple of weeks, but there is no guarantee when it comes to demand for limited release beers.

The first beer of the Smallbatch Beer Program, a treated American Blonde Ale called Peanut Butter and Jellyfish (5.5% ABV), was officially tapped on Sunday, February 5.  Marker 48 Brewing reports that this offering “remains available as of this date.”

At just $100 for a beer a week for the rest of the year, this Smallbatch Beer Program is a no-brainer if you happen to live anywhere near Marker 48 Brewing.  Swing by the tasting room soon to get in on this promotion and start collecting those stamps.  Prost!