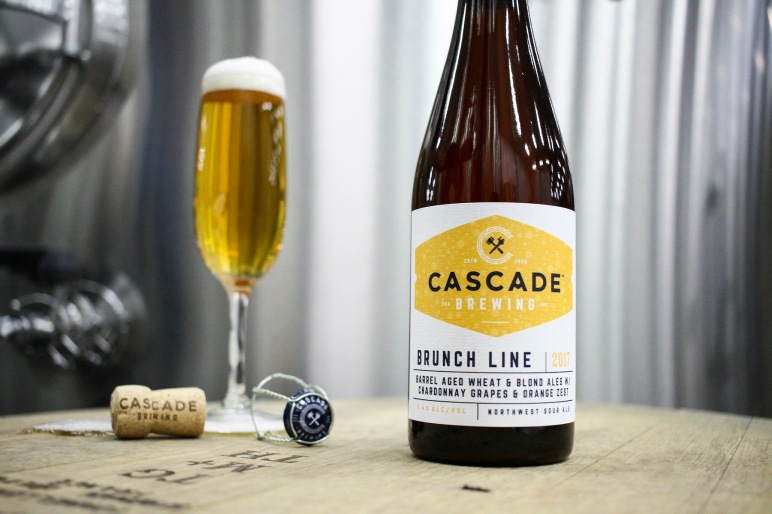 Cascade Brewing (Portland, Oregon) has announced that the Limited Release of Brunch Line (2017) will officially begin on Friday, March 8.

Crafted to honor “the rain-soaked hordes of [Portland] brunch-goers who patiently stand in line for their weekend fare”, Brunch Line (2017) is a mimosa-inspired Sour Ale featuring “sour wheat and blond ales aged in white wine barrels for up to two years with Willamette Valley-grown Chardonnay grapes, then infused with fresh orange zest.”  Brunch Line comes in at 9.6% ABV.

Brunch Line will hit Cascade’s two Portland pubs on March 8 and is expected to enter distribution at or around that date as well.  You can find this Tier One offering available in 500ml bottles and on draft at select craft beer-focused retailers, bars and restaurants located in Alabama, Florida, Oregon and throughout the rest of Cascade Brewing’s distribution footprint.  Prost!

Release – Limited/Tier One; March 8, 2019
Style – American Sour Ale
ABV – 9.6%
Treatment – A blend of “sour wheat and blond ales aged in white wine barrels for up to two years with Willamette Valley-grown Chardonnay grapes, then infused with fresh orange zest”
Fun Fact – Brunch Line is a Tier One offering; “Cascade’s bottles have distinct label styles for each of the three Cascade Brewing pricing tiers, with each label within the tier utilizing distinctive colors to clearly differentiate each beer. The tiers differ by the style of beer used in the product, the type ingredients contained within, the time aged in the barrels and types of barrels used.”
Availability – 500ml bottles & draft