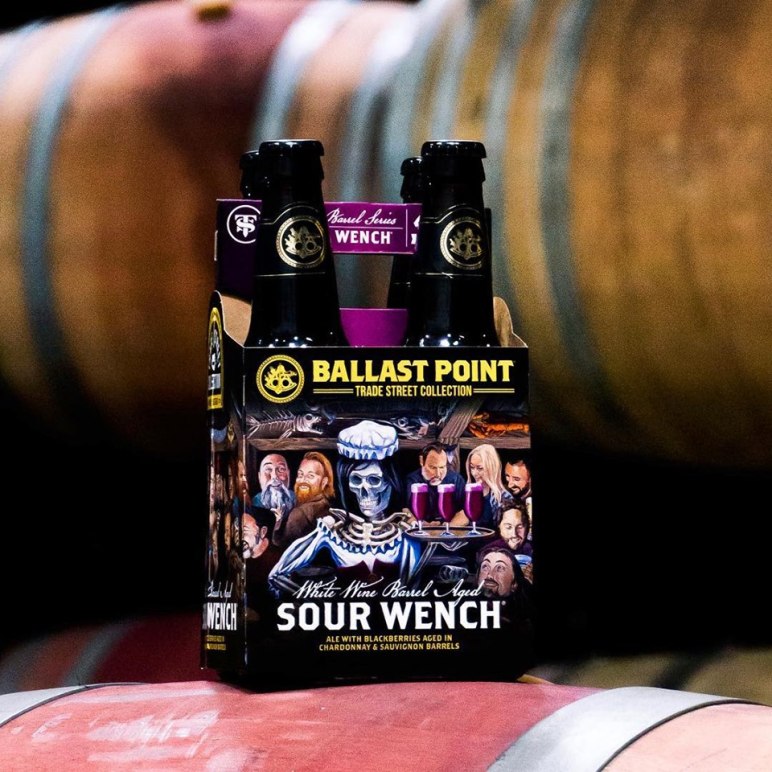 Here to serve as a Limited Release variant of Ballast Point’s award-winning Sour Wench, White Wine Barrel-Aged Sour Wench is an “innovative new brew” that takes the original 7% ABV ale with blackberries and ages it for more than six months in chardonnay and sauvignon blanc barrels.  This lengthy treatment results in a “tart, refreshing, and delightfully smooth” White Wine Barrel-aged Sour Wench that boasts “aromas of freshly sliced white peach, citrus, woody oak tannins and rich vanilla” and flavor notes of “crushed berries and ripe apricots with a buttery smoothness from the chardonnay barrels.”

“With barrel aging, we’re giving tribute to three different attributes – the oak barrels, the wine that was in them before and the base beer,” said Steve Anderson, Ballast Point Director of Barrel Aging. “The blend that’s in the White Wine Barrel Aged Sour Wench bottles is a really nice layering of both the beer and the wine barrels, making it more complex and an amazing end product.”

White Wine Barrel Aged Sour Wench is rolling out now and will hang around for a limited time.  You can expect to find this Limited Release offering available in 4-packs of 12 oz. bottles at select craft beer-focused establishments located in Alabama, Florida, California, Illinois, Virginia and throughout the rest of Ballast Point’s nationwide distribution footprint.  Prost!

"Poetry is what happens when nothing else can." - Charles Bukowski 🍺: Liquid Poem Double IPA from @stonebrewing