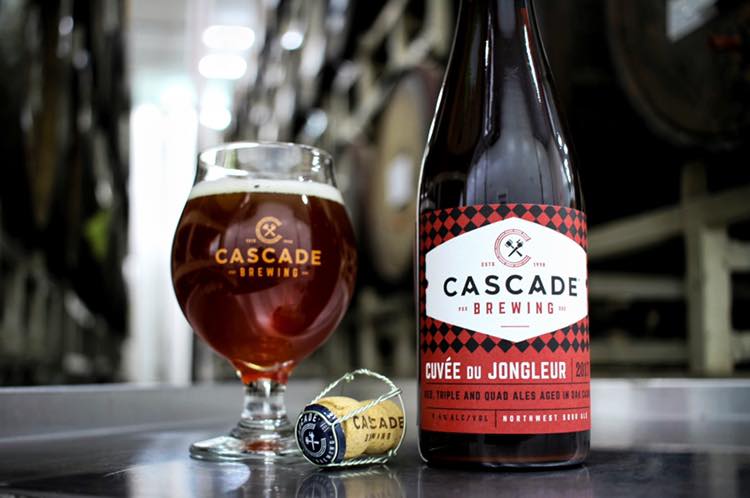 Cascade Brewing (Portland, Oregon) has officially announced that it will release Cuvée du Jongleur (2017) for the first in a decade on November 9.

Originally released in 2008, Cuvée du Jongleur – or “Blend of the Juggler” – is a blended American Sour Ale comprised of “select red, triple and quad sour ales aged in oak barrels for up to three years.”  This latest version of Cuvée du Jongleur – the 2017 project – “pays homage to the original blend, juggling a variety of base beers that offer clean and complex flavors through the lactic fermentation process that has come to define Cascade’s Northwest sour ales.”  Cuvée du Jongleur (2017) comes in at 9.4% ABV.

“When it was originally released, Cuvée du Jongleur was only to be sold in our own brewpub, but since then, it’s become one of the biggest ‘white whales’ in Cascade Brewing’s history,” explained Tim Larrance, Cascade Brewing Vice President. “It was never meant for a national release yet has been sold and traded amongst beer collectors worldwide. We’re excited to make it available once again.”

Release – Limited/Tier One; November 9, 2008
Style – American Sour Ale
ABV – 9.4%
Treatment – A blend of select red, triple & quad sour ales aged in oak barrels for up to three years
Fun Fact – On the label artwork: “The original label, which featured a whimsical juggler, has been updated but still maintains the red and black checker pattern that defined the original release.”
Availability – 500ml bottles & draft