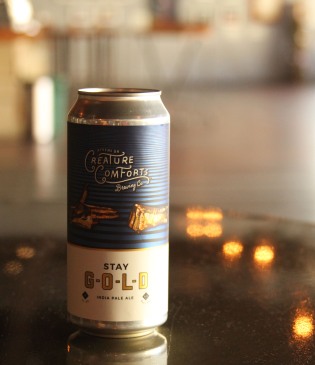 Creature Comforts Brewing Co. (Athens, Georgia) has officially announced that it is getting ready for “the big game” by once again partnering with hip-hop super duo Run the Jewels to release a new batch of Stay G-O-L-D IPA on Tuesday, January 29.

Originally released in October 2017 as one of several IPA collaborations that Run the Jewels created with a handful of breweries across the country, the Creature Comforts’ version of Stay G-O-L- D has been revived to hit fans with that “hazy, juicy, and dank” India Pale Ale experience one more time.  Brewed with Citra, Mosaic, Strata, and Chinook hops, Stay G-O-L-D (6% ABV) “offers a great marriage of dank, pine, and resin flavors paired with a punch of peach, melon, and orange tropical notes.”

“Stay G-O-L-D is a high impact, yet very drinkable IPA,” said David Stein, Creature Comforts Brewing Co. Co-Founder and Head Brewer. “We’re all big fans of Run the Jewels here at Creature Comforts so we were thrilled to have another opportunity to collaborate with them.”

With availability in 4-packs of 16 oz. cans and on draft, Stay G-O-L-D will officially release on January 29 in the Tasting Room at Creature Comforts Brewing Co.  After the on-site release, a limited amount of Stay G-O-L-D will be available on draft only at select craft beer-focused establishments located within Creature Comforts’ distribution footprint in Athens and Atlanta, Georgia.  Prost!