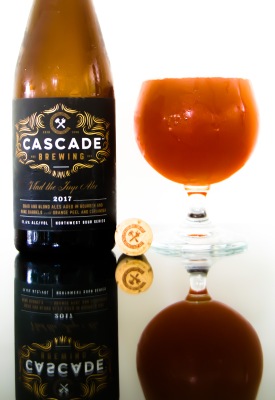 For this special Halloween week edition of Tasting Notes, we sit down and get acquainted with the infamous Vlad the Imp Aler (2017) from Cascade Brewing (Portland, Oregon).

Known to be “one of the most iconic projects in Cascade’s 20-year history of brewing and blending sour beer,” Vlad the Imp Aler is “a combination of quad and blond ales aged in bourbon and wine barrels for up to two years with orange peel and coriander.”  After its lengthy slumber, Vlad the Imp Aler rises to deliver “a fresh acidity and light malt sweetness with notes of bourbon, citrus and spice.”

The 2017 vintage of Vlad the Imp Aler officially debuted back in mid-September 2019 and will hang around only as long as supplies last.  You can look for this Limited Release offering to be available in 500ml bottles and on draft at select craft beer-focused establishments located in Alabama, Florida, Oregon and throughout the rest of Cascade Brewing’s distribution network.

Alrighty . . . now that we have gone over a bit of this notorious brew’s backstory, let’s pop a bottle and see what Vlad the Imp Aler discloses to us over some Tasting Notes!

Tasting Notes for Vlad the Imp Aler (2017) from Cascade Brewing

Appearance: Vlad presents itself as a bright caramel, amber hued brew capped with about a 1/4 finger of white, spritzy foam.  When held to direct light, the amber tones push through and the overall look transitions to more of an apricot color.  The beer is mostly clear and tiny little bubbles can be seen washing about near the top cap.  Head retention is minimal, falling almost immediately to a lasting but very thin ring that drops the occasional dollop of lace on the glass.

Aroma:  The aromatics open with that telltale note of souring bacteria alongside some wet wood.  Bourbon notes then open up with a touch of oak, vanilla and straight boozy bourbon. Vinous qualities are light but there is a bit of wine character layered within.  Citrus tones of orange and lemon lend some acidity and the profile closes with a pretty wonderful dose of funk.

Taste:  The first flavors to hit the tongue are some sweeter tones of honey, caramel, vanilla and light bourbon.  Things then shift suddenly to offer a vinous note that translates as a sweeter white wine note (think Riesling). The Quad base then supplies hints of candi sugar, candied orange peel, and dark fruit that is both sweet and tart – the tart fruit flavor works beautifully with the waves of wild funk and lactobacillus sourness.  The acidity then kicks in with a finish full of citrusy notes from the added orange and coriander.

Mouthfeel:  Heavier side of medium in body with a subtle carbonation presence, this Sour Ale is bright but still maintains a good amount of texture.  The beer balances sweet and sour beautifully while adding just the right amount of acidity.  The vinous notes try to dry things out a bit, but flavors are still allowed to linger a while.  The 11.6% ABV is actually pretty wily, only offering a bit of heat in the throat (nothing near what you expect from almost 12%).  The aftertaste is all honey and citrus.

Final Thoughts:  There is no denying that Vlad the Impaler, the legendary figure in Wallachian history and national hero of Romania, knew how to make an impression. Cascade Brewing’s Vlad the Imp Aler also has quite the personality and easily makes a lasting impression as an incredible American Sour Ale but without all the . . . you know . . . impaling.

Vlad rocks a gorgeous push and pull between sour and sweet that you don’t often find in many Sour Ales (at least not with this level of execution).  The wine and bourbon barrels work beautifully with the base beers and souring bacteria to create a harmonious level of sourness, tartness, sweetness, acidity and even a little drying quality.  Simply calling it a Sour Ale is a disservice because there is so much more going on here. It is a mind-bending experience that challenges your senses and everything you thought you knew about beer. It is unique and memorable.  It is an absolute showstopper. It is Vlad the Imp Aler and you need to get your hands on a bottle or pour while you still have a chance. Prost!