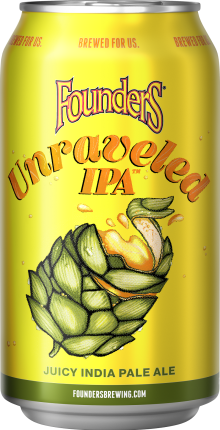 Originally released in 2019 as a part of Founder’s Brewing Co.’s Mothership Series – a lineup of experimental, taproom-only offerings – under the name Mucho Lupo, Unraveled IPA is a Juicy India Pale Ale “dry hopped with traditional hop pellets and lupulin powder, an innovative hop product that separates lupulin from the hop flower.”  With wheat and oats providing “a smooth backdrop to carry all those wonderful hop characteristics,” Unraveled IPA (6.6% ABV, 50 IBUs) is a unique Juicy IPA that pours “beautifully clear.”

“This is one of my favorite IPAs to come out of the brewery in a while,” said Brewmaster, Jeremy Kosmicki. “The hop character is aggressive with its citrus and tropical flavors and aromas while the addition of lupulin powder – rather than relying on over dry-hopping with just pellets – helps keep the grassiness in check. It has great balance and is clean, bright and refreshing.”

“It’s not often we add a beer to our year-round lineup, so when we do it’s definitely reason to celebrate,” said Co-Founder and President, Dave Engbers. “Jeremy wanted to create a juicy IPA that poured clear and he hit the nail on the head with Unraveled IPA. It’s hop aroma and flavor can stand up next to even the juiciest of juicy IPAs, but its clean, crisp finish is unmistakably Founders. Unraveled IPA fits in perfectly alongside Centennial and All Day as yet another fantastic IPA option you can find from Founders.”

Unraveled IPA will debut in Founders Brewing Co.’s Grand Rapids taproom on February 11 and in its Detroit taproom on February 18, and full distribution will follow in mid-February.  You can expect to find this new Year-Round offering available in 6-packs of 12 oz. cans and on draft at craft beer-friendly establishments located in Alabama, Florida, Michigan and throughout the rest of the brewery’s nationwide distribution network.  Prost!

"Alone of all the races on earth, they seem to be free from the 'Grass is Greener on the other side of the fence' syndrome, and roundly proclaim that Australia is, in fact, the other side of that fence." - from Australia - The Confusing Country by Douglas Adams 🍺: Oso Under from @alesmithbrewing & @alvaradostreetbrewery 🐨