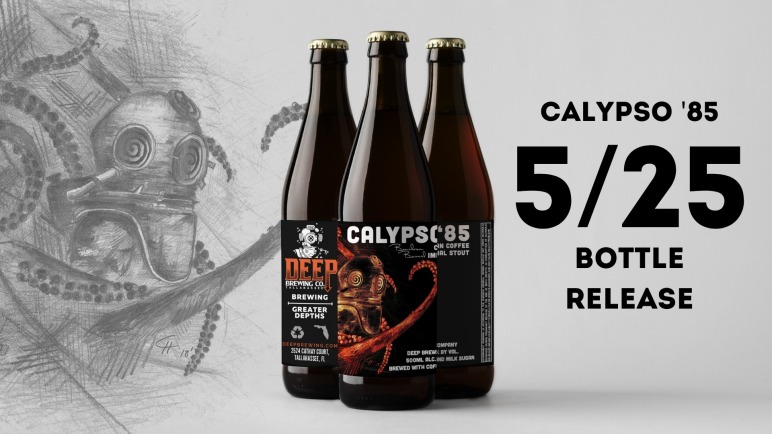 DEEP Brewing Company (Tallahassee, Florida) has officially announced that it will begin the Annual Bottle Release of Calypso ’85, a Barrel-aged Cuban coffee-inspired Imperial Stout, on Monday, May 25.

Rising from the DEEP just in time for Memorial Day, Calypso ’85 is an Imperial Stout that has been “lurking in Four Roses Bourbon barrels for 14 months before being racked atop mountains of fresh Lucky Goat Coffee Co. Columbian Midnight Express [coffee beans] and infused with Lucky 7 Espresso and milk sugar.” Weighing in at an eye-opening 12.3% ABV, Calypso ’85 will give you that Cuban coffee pick-me-up any time of day.

A limited amount of 500ml bottles of Calypso ’85 will release in DEEP Brewing Company‘s online store at 7 a.m. on May 25 (those who land bottles online can then swing by the brewery for curbside pick up between noon and 7 p.m.). Calypso ’85 is a brewery exclusive release that will only be available at DEEP Brewing Company as long as supplies last. Prost!