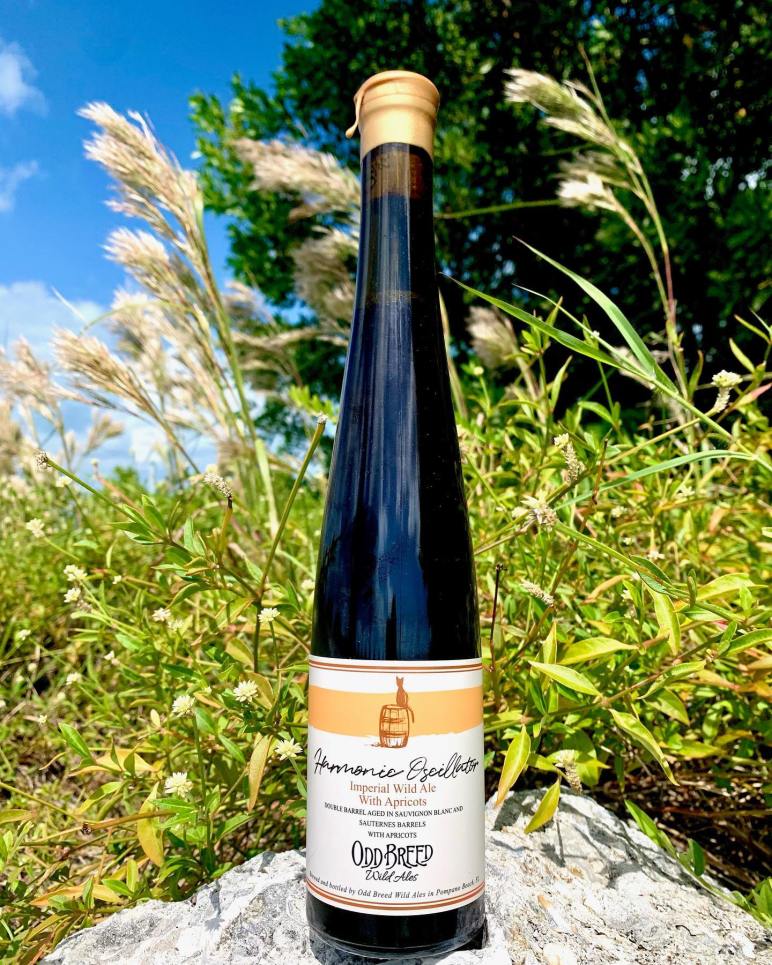 What could be Odd Breed’s “most decadent, opulent beer” to date, Harmonic Oscillator is an Imperial Wild Ale that was “first aged in California Sauvignon Blanc barrels, then conditioned on apricots before finishing in French Sauternes barrels.” Clocking in at 15% ABV and served still, Harmonic Oscillator has “lively aromatics of French Sauternes, Sauvignon Blanc grapes, and fresh apricot” and boasts a “moderate acidity [that] cuts through the sweetness and lends the perception of a lighter mouthfeel to this full-bodied beer, making it incredibly drinkable despite its alcoholic strength.”

If you are unfamiliar with Sauternes, Odd Breed provided the following background information on this rare libation:

“Sauternes is a type of French wine produced in a region south of Bordeaux with white grapes subjected to Botyritis. Botyritis is a type of fungus that results in grapes that become somewhat raisined after periods of high humidity and then dry conditions with ample sun. Sauternes is a protected appellation, and Sauternes can only be made in a particular region of France with Sauvignon Blanc, Sauvignon Gris, Semillon, and Muscadelle grapes. Botyritis infection, also known as noble rot, is unpredictable, and the production of Sauternes is reliant on very particular growing conditions. As such, the production of Sauternes is limited, output is uncertain, and production costs are very high. The commercial endeavor of producing Sauternes is especially risky, and there are years when Sauternes cannot be produced because of unfavorable weather.

“Sauternes is a relatively strong and sweet wine made with grapes that have inherent tartness. By law, Sauternes must be at least 13% ABV, and must finish sweet with unfermented residual sugars. The use of botyrized, concentrated grapes produces an intense, full-bodied wine with very unique flavors akin to stone fruit preserves mixed with gooseberries. The aroma of Sauternes is very distinct and unlike any other wine.”