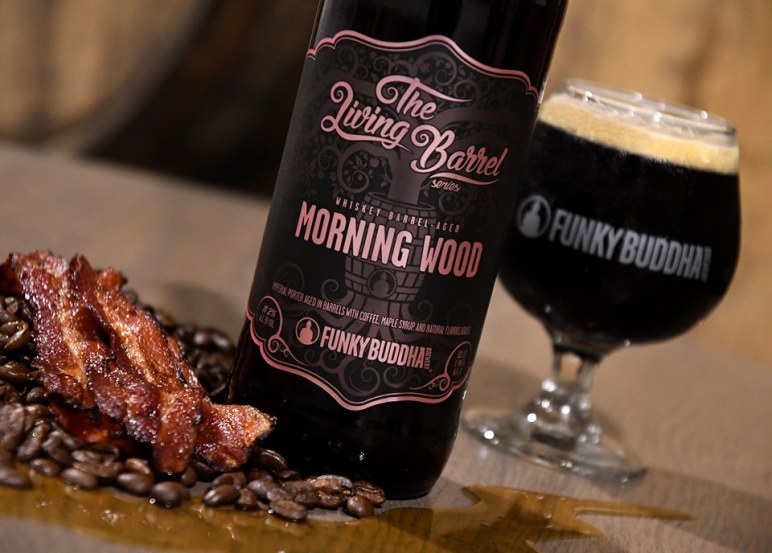 Created to prove that there is nothing “better than beer for breakfast,” Morning Wood is an imperialized version of Funky Buddha’s fan-favorite Maple Bacon Coffee Porter that has spent some time aging in High West Whiskey barrels. This treatment lends a “smoothness to [this Imperial Porter’s] smokey, salty, rich combo of maple syrup, fresh roasted coffee, and bacon-like flavor.”  Coming in at an eye-opening 11.2% ABV, Morning Wood is “a true breakfast of champs.”

Morning Wood will officially release in the Tap Room at Funky Buddha Brewery on October 12 and is scheduled to enter distribution shortly after the on-site release.  You can expect to find this Limited Release offering available in 22 oz. bottles and on draft at select craft beer-friendly establishments located in Florida and throughout the rest of the brewery’s distribution footprint.  Prost!

To celebrate the growth of their brewery and its barrel-aging program in particular, the folks at Funky Buddha have now designated The Living Barrel Series as their official playground for all things barrel-aged.  These Limited Release brews have been carefully aged in a barrel cellar that currently houses “over five hundred oak casks of all types.”  We are talking about “hundreds of Bourbon barrels filled with everything from imperial stout to double brown ales; saisons aging in Chardonnay casks; and a multitude of unique wine and spirits casks including rum, tequila, and even luscious Cabernet.”

“Like the spiraling growth of a tree’s branches, so too are these beers transformed over time thanks to the maturation exclusively in oak wine and spirits casks. Unlike the ageless timber, these bottles are only available for a limited time.”

The Living Barrel Series will launch in the upcoming months with the release of the following three beers:

Rum Barrel-Aged Pina Colada and Vanilla Bourbon Barrel-aged Nikolai Vorlauf will be released in the brewery’s tap room (and possibly see distribution throughout Florida as well) sometime between the “end of July and late August.” Bourbon Barrel-Aged Dread Pirate Roberts will be “released exclusively to . . . Imperial Club members in August, with any remaining bottles released to the general public thereafter.”  All three offerings will be available in extremely limited quantities of 22 oz. bottles.

Funky Buddha Brewery already has plans in place to release “2017 iterations of Morning Wood and Last Buffalo in the Park, plus a host of other surprises to come” as future offerings in The Living Barrel Series.  We will be sure to update you with more detailed information on these and any future releases in the series just as soon as we have it.  Stay tuned.  Prost!