Moving in as the successor to the fan-favorite Stone Imperial Russian Stout that was developed in 2000 and discontinued in 2016, Stone Totalitarian Imperial Russian Stout has arrived with an upgraded recipe that boasts “the careful addition of Belma hops and flaked oats.”  Although the beer retains the original recipe’s old-world nature by pouring “jet-black with a fluffy chocolate head and [tasting] of deeply dark fruit flavors with rich chocolate and coffee overtones”, the added flaked oats enhance the beer’s “long-lasting smooth and silky finish” while the new-world Belma hops “[intensify] its berry flavors and aroma while subtly introducing a juicy melon undertone.”  In an impressive show of force, Stone Totalitarian Imperial Russian Stout flexes its power with a 10.6% ABV and 65 IBUs.

“Our most devout fans don’t surrender quietly when we discontinue beers or skip Stone Special Release favorites,” said Jeremy Moynier, Stone Brewing senior manager of brewing & innovation, and nearly 14-year Stone veteran. “We always tell them they may see it again and in this case, the one year hiatus was well worth the wait. The additional hops and flaked oats add a new layer of complexity and mouthfeel that truly enhance an already remarkable beer.”

Stone Totalitarian Imperial Russian Stout is available now and has plans to remain on shelves and taps into the month of July 2018.  You can expect to find this Special Release available in 22 oz. bottles, 6-packs of 12 oz. bottles and on draft at craft beer-focused establishments located in Alabama, Florida, California, Virginia and throughout the rest of Stone Brewing’s nationwide distribution area.  Prost!

Release – Special Release, mid-March through early July 2018
Style – Russian Imperial Stout
ABV – 10.6%
IBUs – 65
Featured Hops – Magnum & Belma
Fun Fact – On the style’s history at Stone Brewing: “When the densely dark Stone Imperial Russian Stout was still in its infancy, the style wasn’t recognized by the US Government’s agency regulating brewery labels. They thought it implied that the beer was brewed in Russia rather than being an historic English style that had originally been brewed for the Russian court. We had three options:
1. Name the beer simply Stone Imperial Stout
2. Name the beer Stone Imperial Russian-Style Stout
3. Fight back
The team embarked on a three-year naming battle before finally earning the style’s full recognition for Stone and all fellow US brewers. Stone Imperial Russian Stout was born as obstinate as it returns.”
Availability – 22 oz. bottles, 6-packs of 12 oz. bottles & draft
Beer Finder – https://find.stonebrewing.com/#ready 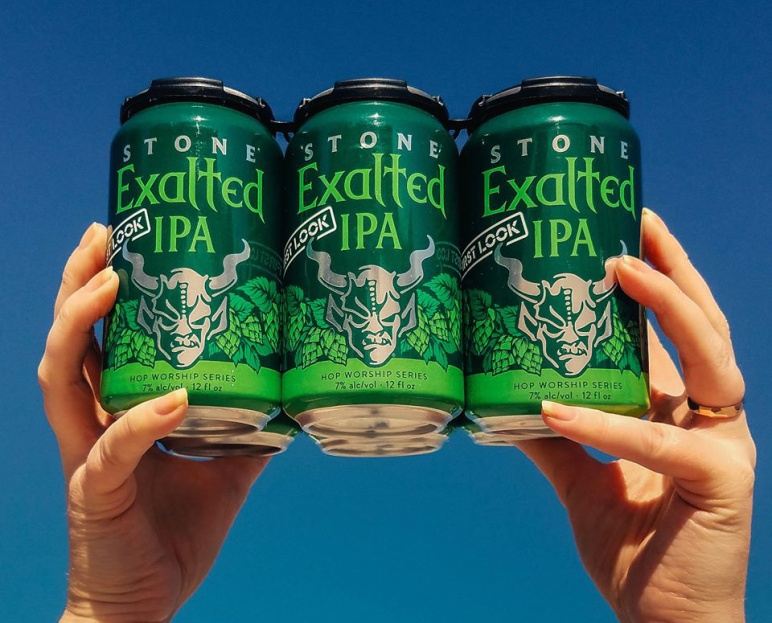 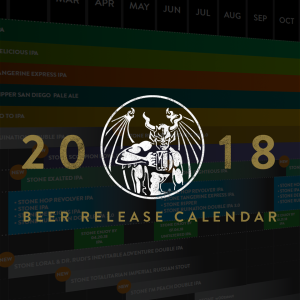 Stone Brewing (Escondido, California) recently unveiled its 2018 Beer Release Calendar and it boasts a serious amount of hop goodness from its newly-established Trinity of Hoppiness, a new Seasonal IPA series, and a few robust Stouts thrown in for good measure.

Just as we always do when it comes to beer calendars around here, we have posted Stone Brewing’s full 2018 Beer Release Calendar below for you to take in at your own leisure.  That said, there is a diagram and a handful of new releases that we should probably provide some clarity on before turning you loose.  We do intend to be brief, so let’s knock it out:

“We have a Brewing Innovation Team that has labored the last year in pursuit of the exceptional…and delivered it, in sanguine, liquid form,” said Dominic Engels, Stone Brewing CEO. “These incredible new beers, alongside a series of fan favorites allow us to unveil uniquely Stone beers with every release in 2018. True to our roots, the IPAs we’re releasing this year are clearly the work of an evangelical hop worshiping crew. Amen.”

Alright . . . our job should be done here, but there is still plenty to discover on the calendar below.  Check it out and get ready for a ridiculously hoppy year with Stone Brewing in 2018.  Prost!