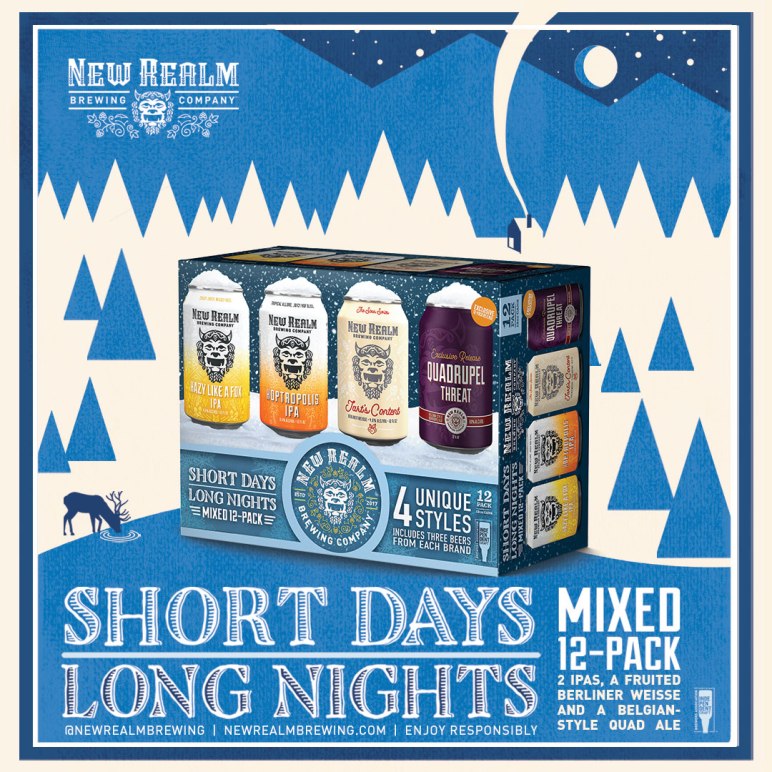 Compiled to be the perfect companion to help keep you warm and cozy this winter, Short Days | Long Nights is a Mixed 12-pack that contains three 12 oz. cans of each of the following offerings:

“We knew we wanted to have a strong Belgian Ale in this Winter Mixed Pack, and after some discussion of a few style options, we decided on a Quadrupel. Some of the best Quadrupels from Belgium are very popular during the timing that coincides with this release, so we thought something dark, robust, and malty would be a perfect addition to our Winter Mixed Pack.”
– Mitch Steele, Brewmaster and Co-Founder of New Realm Brewing

Short Days | Long Nights is available now and will hang around through February (while supplies last). You can expect to find this Seasonal Mixed 12-pack of 12 oz. cans available at select craft beer-focused retailers located within New Realm’s distribution footprint in Georgia and Virginia. Prost! 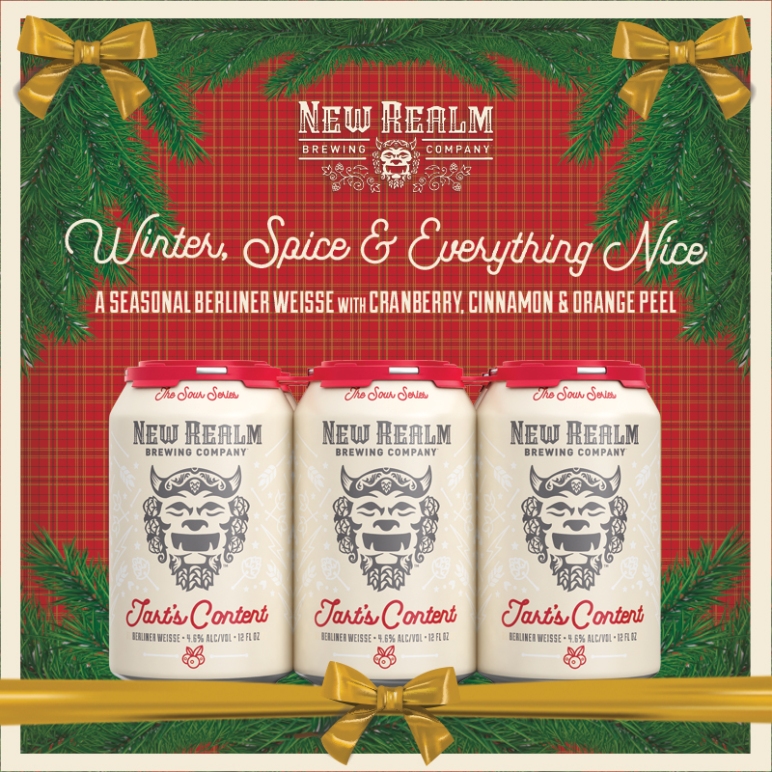 New Realm Brewing Company (Atlanta, Georgia) has officially announced that it will welcome back Tart’s Content Berliner Weisse for a Limited Release beginning on October 8, 2020.

Back to retain its spot as the fourth release of the year in New Realm’s Sour Series, Tart’s Content is a fall-inspired Berliner Weisse featuring additions of cranberry, cinnamon and orange peel. Coming in at 4.6% ABV, the “richly fruited [Tart’s Content] impresses with its tart, bright citrus and spiced fall flavors.”

“We’re excited to bring back Tart’s Content for this upcoming holiday season. This beer will get you in the festive spirit with each sip. Our Brewing team did a great job with this beer last year and we could not wait to bring it back again” said Bob Powers, Co-Founder and Chief Sales & Marketing Officer of New Realm Brewing.

“Tart’s Content is a wonderful Berliner Weisse that reminds me of holiday gatherings and great meals. Cranberry juice, cinnamon and a hint of orange peel work together to create a very festive beer” said Mitch Steele, New Realm Co-Founder and Brewmaster.

Tart’s Content will officially return on Thursday, October 8 and will hang around for a limited time during the fall and winter months. You can expect to find this Limited Release available in 6-packs of 12 oz. cans and on draft at select craft beer-focused establishments located within New Realm’s distribution footprint in Georgia and Virginia. Prost! 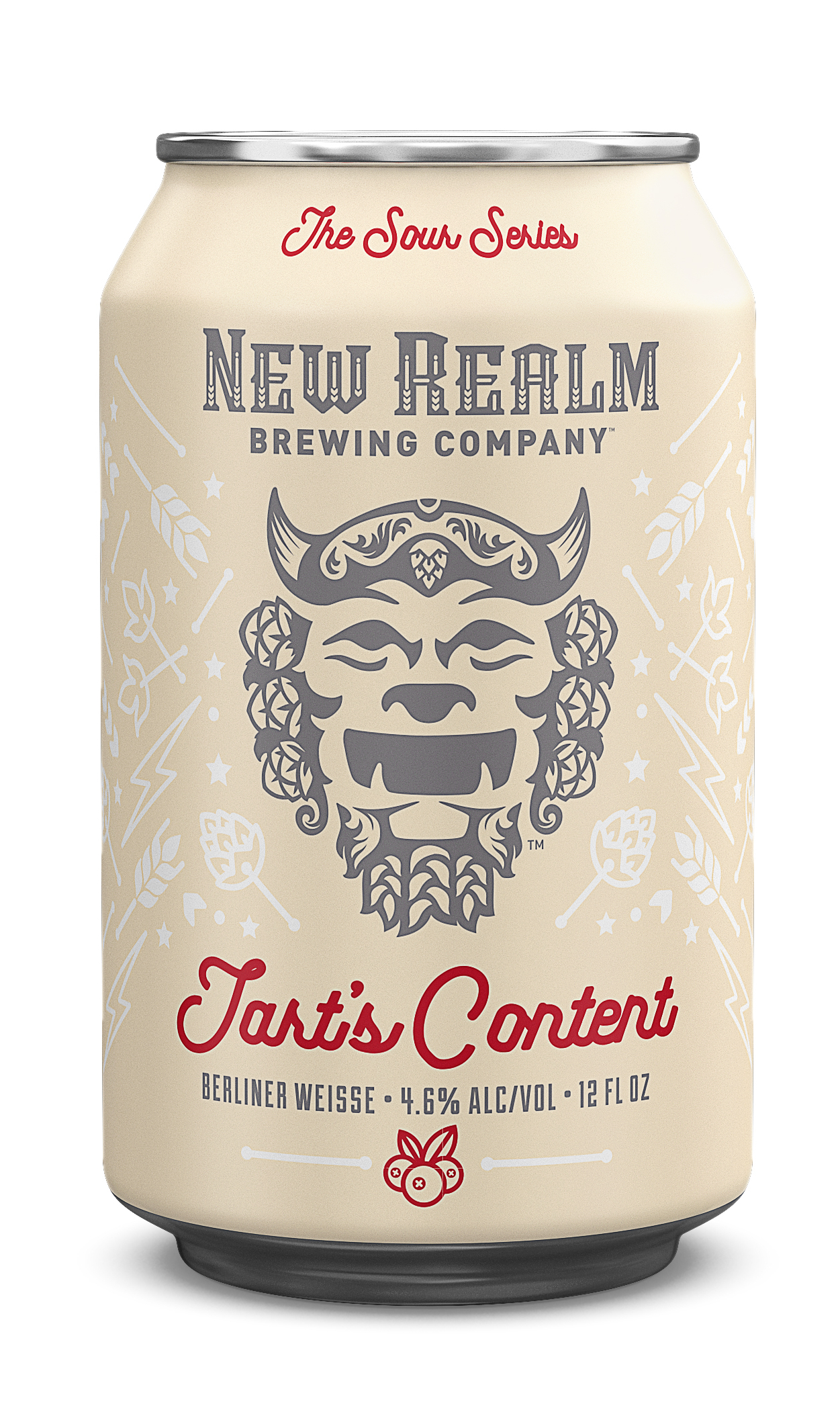 New Realm Brewing Company (Atlanta, Georgia) has officially announced that it will begin the Limited Release of Tart’s Content Berliner Weisse on November 4, 2019.

Developed to capture the feel of autumn and the Holiday Season, Tart’s Content is a “richly fruited Berliner Weisse aimed to impress the palate with its tart, citrus and spiced fall flavors.”  Coming in at 4.6% ABV, Tart’s Content “pairs well with harvest festivals, fall leaves and family feasts.”

“Last October, we started brewing Lemon Pucker and we took five barrels of a batch and placed it into our pilot system,” said Mitch Steele Co-Founder and Brewmaster of New Realm Brewing. “The original thought was to make a cranberry Berliner since cranberries have their own natural tartness. After we tasted the beer, we agreed that it needed more complexity so we added cinnamon and orange peel in an attempt to try and recreate the delicious cranberry dishes one might find at a holiday party. The result is our latest addition to our Sour Series.”

Tart’s Content is scheduled to release on November 4 and will hang around for a limited time this Holiday Season.  You can expect to find this Limited Release available in 6-packs of 12 oz. cans and on draft at select craft beer-focused establishments located throughout New Realm’s distribution footprint in Georgia and the Hampton Roads area in Virginia.  Prost!