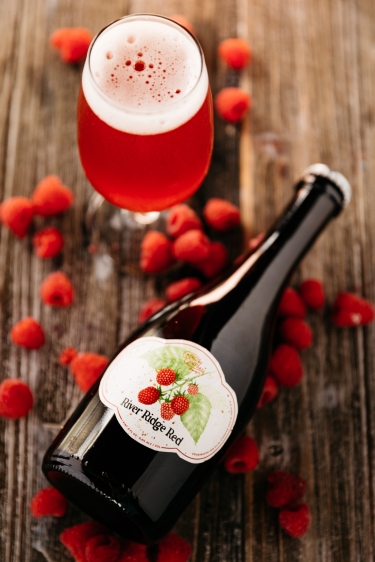 Creature Comforts Brewing Co. (Athens, Georgia) has officially announced that it will hold a Limited Bottle Release for River Ridge Red in its Tasting Room on June 15.

Brewed as a “celebration of the crop from Independence, Virginia’s River Ridge Organics“, River Ridge Red is an “an ale aged in oak barrels with organic red raspberries” from River Ridge Organics.  To properly execute this meticulously crafted offering, the blending team at Creature Comforts carefully “selected the best blend of barrels to honor the complex flavor of the red raspberries featured in the beer.”  Once the blended beer was introduced to the fresh fruit, the folks at Creature Comforts “performed punchdowns for two weeks, and then continued to macerate on the fruit for more than 6 months . . .  [to allow] the acids from the fruit to round out and mellow, leaving a soft and honest red raspberry flavor.”  The completed River Ridge Red comes in at 6.6% ABV.

Releasing alongside The Curious No. 12, River Ridge Red will officially debut in the Tasting Room at Creature Comforts Brewing Co. on Saturday, June 15.  This Limited Release offering will be available for purchase in 500ml bottles – $17.99 per bottle, limit of six (6) bottles per person – and fans have the option to pre-purchase bottles on CraftCellr.  River Ridge Red is a Tasting Room exclusive release and is not expected to see distribution.  Prost!