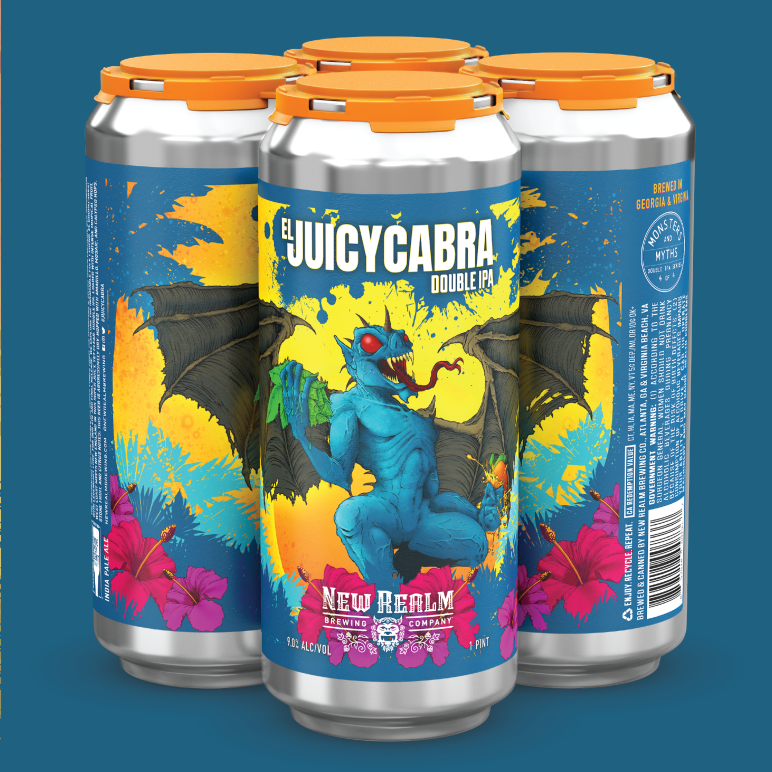 New Realm Brewing Company (Atlanta, Georgia) has officially announced that it will begin the Limited Release of El JuicyCabra, the fourth and final release of 2020 in the brewery’s Monsters and Myths Double IPA Series, on October 20.

Inspired by and named after “the insatiable folk legend” of El Chupacabra, El JuicyCabra is a “New England meets West Coast” Double India Pale Ale that has been “aggressively” dry-hopped with Amarillo, Mosaic and Calypso hops to create “intense tropical fruit, stone fruit, and citrus notes.” Clocking in at 9% ABV and 50 IBUs, El JuicyCabra comes together to be a “super juicy, yet clear, Double IPA.”

“What we tried to do with El JuicyCabra DIPA was combine the best of both worlds, the juiciness of a Hazy IPA, and the clarity of more traditional styles. The result is a tasty DIPA with tropical citrus and herbal hop character” said Mitch Steele, Co-Founder, and Brewmaster of New Realm Brewing.

“With our Monsters & Myths lineup, we created a series of Double IPAs that allowed us to include our award-winning Tyrannosaurus Flex DIPA from the year before. During concepting and brainstorming sessions, we agreed that the versatility to explore various folk legends and depict them in a silly and fun manner was the right direction. El JuicyCabra’s look was a challenge, but while exploring a YouTube rabbit hole on El Chupacabra, and some additional research, the light bulb went off,” said Erik Leach, Brand Marketing Coordinator of New Realm Brewing.

El JuicyCabra is scheduled to officially release at New Realm’s Atlanta and Virginia Beach locations on October 20 and distribution will begin at or around that date as well. You can expect to find this Limited Release available in 4-packs of 16 oz. cans and on draft at select craft beer-focused establishments located within New Realm’s distribution footprint in Georgia and Virginia. Prost!