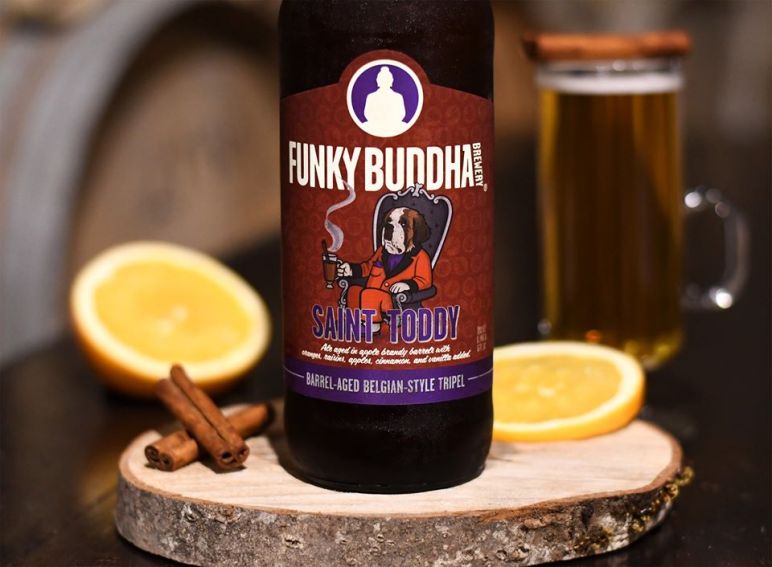 Funky Buddha Brewery (Oakland Park. Florida) has officially announced that it will hold a Limited Bottle Release at the brewery for Saint Toddy Barrel-aged Belgian-style Tripel on Saturday, November 23.

Inspired by the warming, cold weather beverage known as the hot toddy, Saint Toddy is a Belgian-style Tripel that has been aged in both Bourbon and Apple Brandy barrels and infused with oranges, apples, raisins, cinnamon, and vanilla.  The experience and flavors are so on point that Saint Toddy (8.1% ABV) “can actually be served warm. Slowly heat the beer in a double boiler topped with freshly ground cinnamon and serve hot for a traditional, luxurious experience or drink cold and savor the season.”

Saint Toddy is scheduled to release in the Tap Room at Funky Buddha Brewery on November 23.  In addition to being served warm during the release event, this Limited Release offering will also be available in 22 oz. bottles ($20 each) and on draft as long as supplies last.  There is no word at this time as to whether or not Saint Toddy will see distribution.  Prost!

Release – Limited; November 23, 2019
Style – Belgian-style Tripel
ABV – 8.1%
IBUs – 30
Added Ingredients – Oranges, apples, raisins, cinnamon & vanilla
Treatment – Aged in Bourbon & Apple Brandy barrels
Fun Fact – “The hot toddy was our inspiration behind this complex brew. It’s a rich and rejuvenating elixir made with whiskey and/or brandy, citrus, herbs, spices and served warm. Traditionally consumed before retiring for the night, or in wet, cold weather. In classic funky fashion, we gathered all the natural ingredients we could to develop a recipe to match the flavor profile of this classic drink. Belgian ale, spirit casks, fruits, spices and voilà! We have Saint Toddy.”
Availability – 22 oz. bottles & draft
Distribution – Brewery Release; there is no word on whether this offering will see distribution