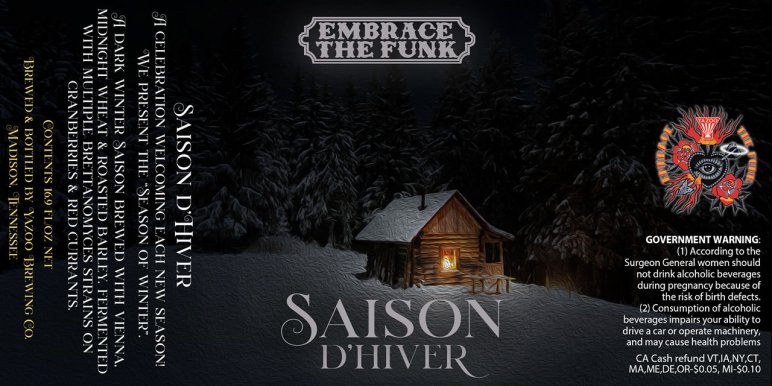 Yazoo Brewing Company (Madison, Tennessee) has officially announced that it will begin the Limited Release of Saison D’Hiver, the brewery’s latest Embrace the Funk project, on Saturday, December 19.

Carefully crafted to honor winter, Saison D’Hiver – meaning “the Season of Winter”) is a Dark Saison “brewed with Vienna, dark wheat, roasted barley, special b malt and dark invert Candi syrup.” The beer went on to be “fermented with multiple Belgian and French yeast strains on dried black currants” and then bottled with brettanomyces. Coming in at 9.2% ABV, Saison D’Hiver is a holiday treat that can be enjoyed fresh or aged.

Saison D’Hiver will officially release at Yazoo Brewing Company on December 19 but you can go ahead a pre-order your bottles now by clicking here. With only a limited amount of 500ml bottles available for $13 each, Saison D’Hiver is a brewery only release that will not see distribution. Prost! 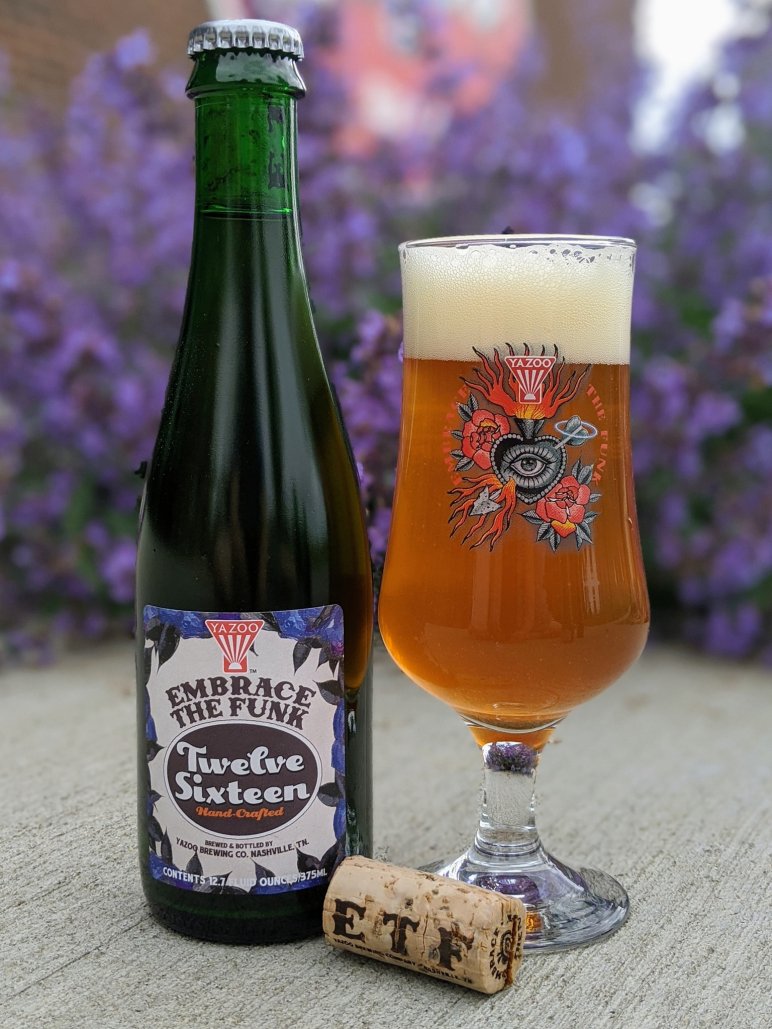 Yazoo Brewing Company (Madison, Tennessee) has officially announced that it will begin the Limited Release of Twelve Sixteen, the brewery’s latest Embrace the Funk project, on Wednesday, May 20.

Described as “a once in a lifetime Mélange of [Embrace the Funk’s] first two coolship beers,” Twelve Sixteen is an American Wild Ale “brewed with raw wheat, pale malt and aged hops” and then “spontaneously fermented by local Nashville microflora in the 2012/13 & 2016/17 seasons.” This special project went on to be “oak aged then blended for a natural one-year bottle refermentation.”

“When we were preparing to move the brewery in early 2019, I found a keg of our original spontaneous ale named “Clarence” brewed on 12/12/12 at Division Street in downtown Nashville. The beer was a reflection of what our native local environment influenced, eventually advancing to the medal round of GABF 2014.

“Finding that keg, and tasting a beer I thought was long gone was very exciting. It made sense to take our first batch in 2012 and blend it with our first batch in our new coolship from the 2016/2017 season of spontaneous brewing. Bottled on April 23rd 2019 for a one-year bottle conditioning evolution. I hope you enjoy this project of time, natural progression, local microflora and passion.

“It has long been a dream of mine to present on a larger scale what the diverse Middle Tennessee microbes have to offer.”

Twelve Sixteen is scheduled to officially release at Yazoo Brewing Company on Wednesday, May 20 and you can pre-order your bottles now by clicking here.  This Special Release is limited to only 500 375ml bottles and “once gone they are gone.”  Prost! 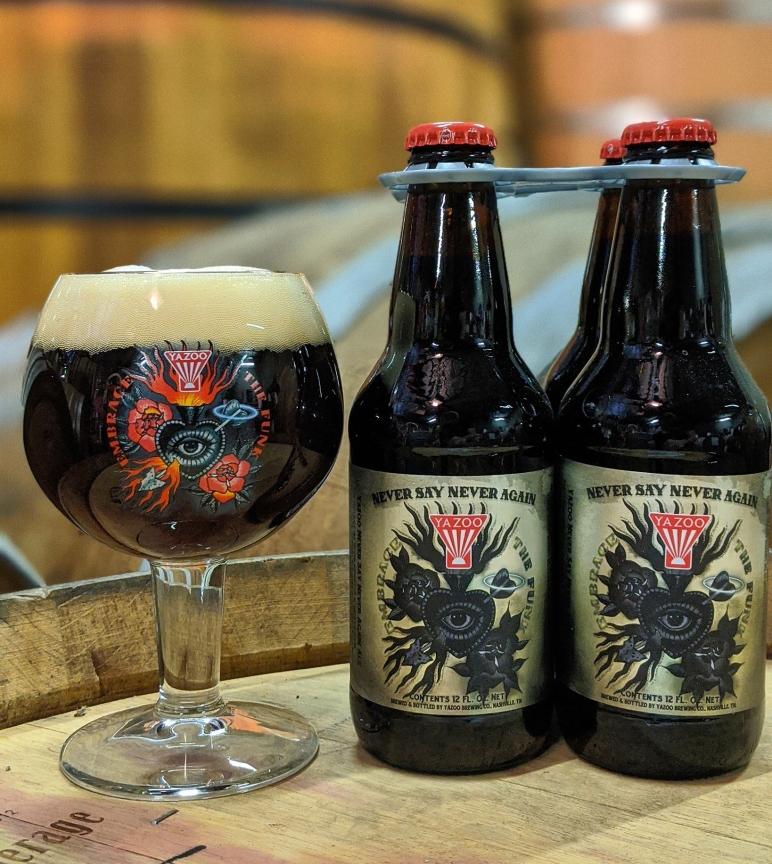 Yazoo Brewing Company (Madison, Tennessee) has officially announced that it will begin the Limited Release of Never Say Never Again, the latest Sour Ale project from the brewery’s Embrace the Funk program, on May 1.

“Many of you know the crazy story behind what became ‘Never Again’ in 2015. It still remains one of the most asked questions ‘Will you or can you make that beer again?’ I usually answered with ‘Well we did put Never Again on the label.’ But a good challenge is fun. So in 2017 I set out to attempt a sequel version of the final beer (minus the leaky barrels, pallets falling over etc…). Double barrel aging everything before this final blend sure brought back some memories! I believe I was able to capture the overall character of the original in this batch.”

Never Say Never Again is scheduled to officially release at Yazoo Brewing Company on Friday, May 1.  This Limited Release offering is available as long as supplies last in 4-packs of 12 oz. bottles and in a **UPDATE 4 p.m. 05.01.2020** Special Limited Edition Packages are SOLD OUT**UPDATE 4 p.m. 05.01.2020** for local delivery and curbside pickup at the brewery (click here to place your order online).  Prost! 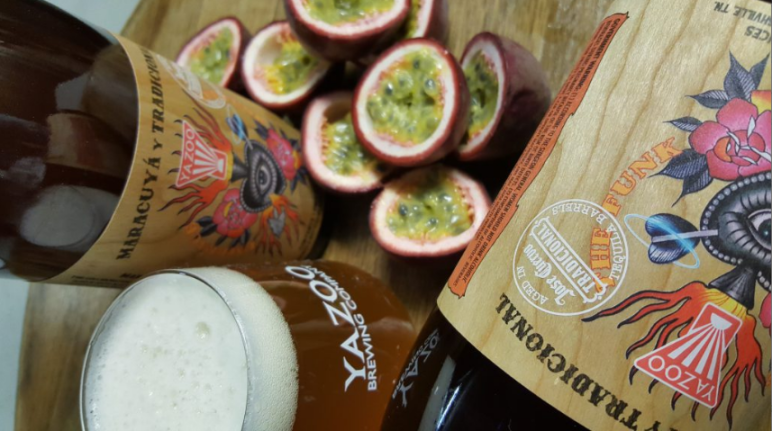 After quietly collaborating for nearly two years, the folks at Yazoo Brewing and Jose Cuervo have seemingly come out of nowhere to announce their clandestine efforts with the release of Maracuyá y Tradicional (translated: Passion Fruit and Traditional Casks).  Arriving as an incredibly special offering from the brewery’s Embrace The Funk series of sour and barrel-aged beers, Maracuyá y Tradicional is a Brettanomyces fermented Golden Strong Ale that has been made with passion fruit and then carefully “aged in Jose Cuervo 100% Blue Agave Tradicional Reposado Tequila casks.”  No one is going to know this beer better than the head of Yazoo’s Embrace The Funk program, so here is how he describes Maracuyá y Tradicional:

“Working with a legendary 200 year old Tequila producer on this project has been a very fun crossover into merging beer, freshly emptied tequila oak and wild yeasts. The beer has a big bright tropical fruit character that melds so well into the deep smooth character of the tequila casks. There are a lot of layers to this beer, it’s definitely multiple beers in one bottle.”

As an added bonus, this collaborative effort gets another twist now that Yazoo has sent the Wild Ale-seasoned casks back to Jose Cuervo.  The distillery “is currently finishing a version of their 100% Blue Agave tequila in these same casks for a future special release of an Embrace The Funk tequila.”

On April 19, 750ml bottles – with a real wood label – of Maracuyá y Tradicional will be available for purchase in Yazoo’s taproom.  The brewery “will also have 20 (twenty) 1.5L magnum bottles of this one time collaboration available on a first come first serve basis.” In addition to the taproom release, this offering will also see ” limited local distribution.”  You best believe that these bottles will go fast, so do what you can to be at the Yazoo taproom on Wednesday to secure your bottle of Maracuyá y Tradicional.  Prost!