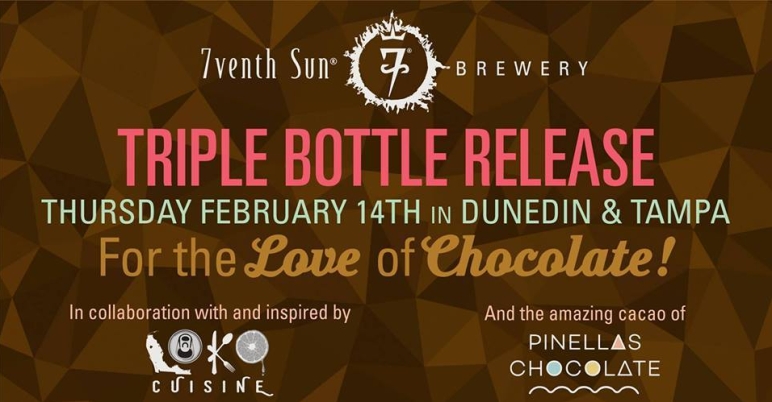 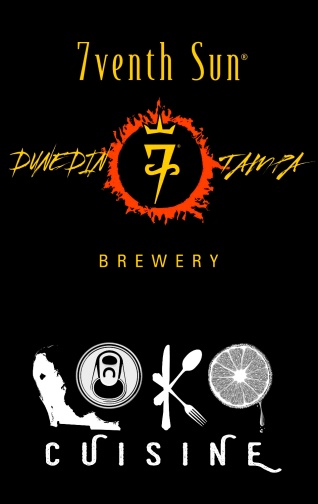 7venth Sun Brewery (Dunedin & Tampa, Florida) has officially announced that it will host “For the Love of Chocolate!”, a special bottle release event featuring three chocolate-centric beers brewed in collaboration with LOKO Cuisine, on Thursday, February 14.

To bring the appropriate amount of chocolaty goodness to your Valentine’s Day this year, 7venth Sun Brewery recently brought in John LoScalzo of LOKO Cuisine to “put his creative, wonderful and talented chef brain to work on some delicious beer ideas” that all feature cacao nibs from Pinellas Chocolate.  As usual, LoScalzo came through to produce some amazing flavor combinations that he and the brewery translated into the following three culinary-inspired Imperial Sweet Stouts that will be featured at the “For the Love of Chocolate!” Bottle Release (descriptions sourced directly from 7venth Sun’s event page on Facebook):

All three beers above are priced at $17 per bottle and will go on sale at both 7venth Sun locations at noon on Valentine’s Day.  These beers will be available as long as supplies last and there will be no bottle limits.

In addition to the triple bottle release, “For the Love of Chocolate!” will also feature a few special beer tappings at both 7venth Sun locations.  As far as food goes, Xtreme Tacos will be at the Tampa location at 6 p.m. to collaborate with LOKO Cuisine on “a mole chicken Valentine’s dinner special” that will pair beautifully with the featured beers.  Guests attending in Dunedin are encouraged to venture next door to HopScotch Cafe to experience their “charcuterie and cheese boards in addition to their delicious salads and sandwiches.”

For those keeping score at home, this event features indulgent levels of chocolate, decadent adult beverages, and delicious food options.  So . . . it pretty much sounds like 7venth Sun and LOKO Cuisine just handled all your Valentine’s Day needs in one sweet package.  Whether you are in Dunedin or Tampa, do the right thing, swing by a 7venth Sun location and treat yourself (and anyone you feel inclined to bring along) to everything this “For the Love of Chocolate!” event has to offer.  Prost!