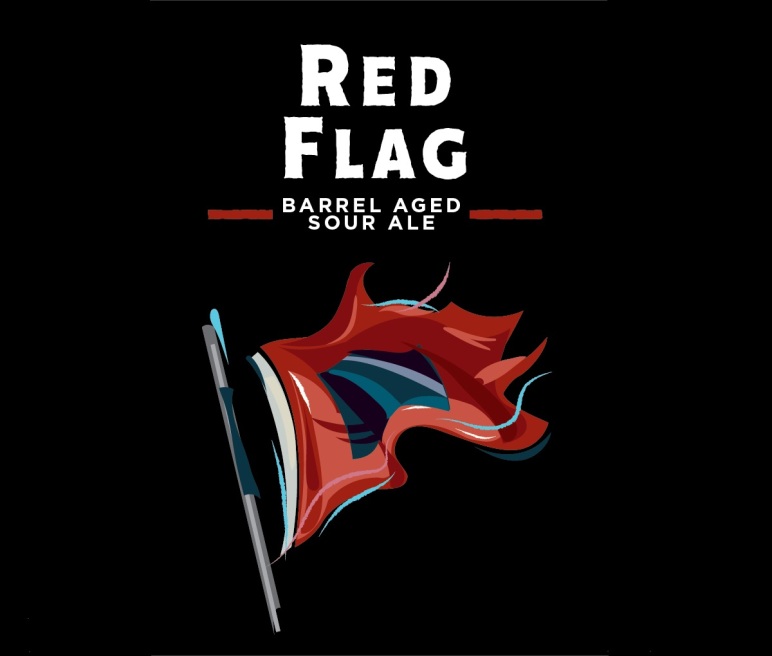 Surfacing as the “first sour offering in the Uncharted Waters series”, Red Flag is an American Sour Ale that was “brewed in the classic Flemish Red style” and “aged in stainless and then moved to bourbon and red wine barrels for further maturing.”  When the beer was deemed properly aged and rested, the barrels were then “hand selected and blended to create the most complex and seductive sour ale possible.”  Coming in at a smooth-sipping 8% ABV, Red Flag ” delights with sweet malt tones, complex fruit undertones, and a deliciously tart finish.”

“We are very excited about Red Flag, as it is the first barrel aged beer we’ve produced with wild yeast and bacteria,” says Heavy Seas Brewmaster, Christopher Leonard. “Red Flag is inspired by the tart, dry, Sour Red and Brown ales of Flanders. Ultimately, it will be a blend of six different batches of ‘sour’ beer aged in 4 different ‘styles’ of barrels. It’s been quite a complicated, but exciting process. Blending all of these similar but different barrels and ‘fresh beer’ to create one dynamic, complex, mysterious, funky, tart offering has been an amazing journey for us. And, as a bonus, we will be holding on to some of the beer in barrels to allow for some fun, interesting blending down the road. We don’t yet know when or how, but I have no doubt we’ll find a way to use these in more fascinating projects in the future!”

Red Flag is scheduled to roll out in June and will hang around as long as supplies last.  You can expect to find this Limited Release offering available in 4-packs of 12 oz. bottles and on draft at select craft beer-friendly retailers, bars and restaurants located in Alabama, Florida, Maryland and throughout the rest of Heavy Seas Beer’s distribution footprint.  Prost!

Heavy Seas Beer (Baltimore, Maryland) has provided craft beer fans a look at the year ahead with the release of the brewery’s 2019 Product Portfolio.

Just as we do with all posts concerning release calendars, we have listed the entire Heavy Seas 2019 Product Portfolio below for you to peruse at your own pace.  With that said, there are few juicy details that we need to go over first.  We promise to be brief, so let’s go ahead and knock it out:

Alright . . . that’s everything that we wanted to gloss over, but there is still plenty to discover in portfolio below.  Give it a good look and start getting excited about all the new Heavy Seas brews headed your way in 2019.  Prost!