For this week’s installment of Tasting Notes, we dig up some Halloween spirit by getting into a bottle of Dead ‘N’ Dead from Rogue Ales (Newport, Oregon).

Developed to be the next “evolution” of Rogue Ales’ long-standing Dead Guy Ale, Dead ‘N’ Dead introduces the brewery’s iconic German Maibock-style Ale to the barrels that once held Dead Guy Whiskey, a spirit “distilled from the same . . . malts as . . . Dead Guy Ale.”  Taking full advantage of being the only brewery-distillery-cooperage in the U.S., Rogue had their brewers, distillers and coopers work together to carefully barrel age this brew for “several months at the Rogue ocean aging room.”  The hard work that went into this treatment pays off as Dead ‘N’ Dead (8.8% ABV) comes together to feature “a strong whiskey nose and added notes of oak and vanilla, with a smooth caramel flavor from the whiskey barrels that balances out Dead Guy Ale’s malty, honey sweetness.”

Dead ‘N’ Dead is available through the end of October in 22 oz. bottles and on draft.  You can expect to find this Limited Release brew at select craft beer establishments located in Alabama, Florida, Oregon and throughout the rest of Rogue’s nationwide distribution footprint.

Now that we are all clued in on how this beer was brought to life, let’s raise some Dead ‘N’ Dead and get into these Tasting Notes!

Appearance: A careful pour fills the glass with an apricot-hued, honey brown colored beer that it is topped with just over a finger of creamy, slightly off-white foam.  When held to direct light, that apricot tone intensifies and the overall color shifts to more of a deep amber.  The beer is a touch cloudy but remains mostly clear and displays a dutiful carbonation presence streaming about within.  Head retention falters a bit, falling somewhat quickly to a thin – but lasting – ring that dots the glass with an occasional smattering of lace.

Aroma:  The base beer is first to greet the nose with notes of bready malt, brown sugar, caramel and honey.  The barrel then pushes forward to offer a poised amount of oak and vanilla along with deeper caramel tones.  The profile gracefully closes with gentle notes of earth, leather and just a touch of dark fruit.

Taste:  The whiskey barrel takes lead here as it brings soft notes of oak, vanilla, coconut and booze.  The soul of Dead Guy then rises to support with notes of sweet grain, toasted bread, caramel, honey, and a bit of nuttiness.  The earthiness is a bit more subdued here than it was in the aroma, but tones of citrus (from both the hops and whiskey), leather, and dark fruit (mostly a lovely, deep presence of dates) put in some beautiful work to round everything out in the finish.

Mouthfeel:  On the heavier side of medium in body with a lighter carbonation than expected, this brew has a creamy texture that glides softly across the palate.  The beer works toward balance, but it does end up leaning just a bit in the direction of sweet and boozy.  Speaking of boozy, the 8.8% ABV does supply a building warmth in the throat that reminds you that this is indeed a brew meant for sipping.  Aftertaste is all oak and dark fruit.

Final Thoughts:  All in all, Dead ‘N’ Dead comes together to be a fun and impressive riff on the classic that is Dead Guy Ale.  The Dead Guy Whiskey character is right on point, delivering a citrusy whiskey quality that acts as more of a compliment rather than an overwhelming focus. It is there to enhance the base beer, and it does just that by really drawing out and showcasing the malt bill that it shares with Dead Guy Ale.  Those sweet notes of bread, honey and caramel act as the strong common thread that stitches Dead ‘N’ Dead together to become a seamless, sip-worthy version of Dead Guy that remains just as satisfying and memorable as the original.  Although it comes across as almost effortless, the level of craftsmanship here – like in most Rogue offerings – is remarkable and should be recognized as such.  Be sure to check it out if you get the chance. Prost! 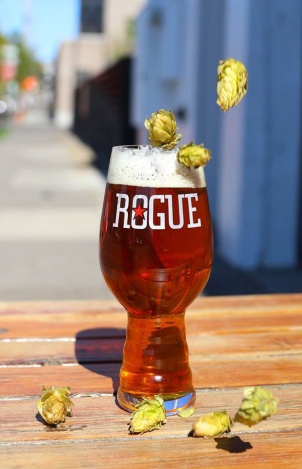 Arriving as the newest evolution of Rogue’s Dead Guy Ale, Dead ‘N’ Dead is the brewery’s way of introducing their iconic German Maibock-style Ale to the barrels that once held Dead Guy Whiskey, a spirit “distilled from the same three malts as . . . Dead Guy Ale.”  Taking full advantage of being the only brewery-distillery-cooperage in the U.S., Rogue had their brewers, distillers and coopers work together to carefully age this brew for six months in these barrels.  Their hard work has paid off, and Dead ‘N’ Dead (7.3% ABV) comes together to feature “a strong whiskey nose and added notes of oak and vanilla, with a smooth caramel flavor from the whiskey barrels that balances out Dead Guy Ale’s malty, honey sweetness.”

“We had a lot of fun producing Dead ‘N’ Dead,” said Rogue President Brett Joyce. “We have these amazing tools to work with, from our handcrafted ales and spirits to our whiskey barrels. Our brewers and distillers got resourceful by colliding our most popular beer and spirit to make a new favorite.”

Dead ‘N’ Dead is a Limited Release offering that is available while supplies last.  You can expect to find Dead ‘N’ Dead in 22 oz. bottles and on draft at craft beer establishments located in select areas of the Rogue Ales distribution network.  Prost!

Rogue Ales (Newport, Oregon) has redesigned the packaging artwork for their long-standing Dead Guy Ale.  Additionally, this offering is now available in 12 oz. cans for the first time.

The folks at Rogue Ales brewed and bottled their first batch of Dead Guy Ale back in 1990 “as a Dia de los Muertos beer for a Portland Tex-Mex restaurant.”  This German Maibock-inspired American Ale was immediately embraced by the craft beer community and it remains a fan-favorite offering 26 years later.  Although the packaging has experienced subtle tweaks over the years, Dead Guy Ale has always worn a label depicting “a beer-clutching skeleton with crossed arms and a beehive hat sitting on a barrel.”  Since this image is easily one of the most recognized logos in craft beer, Rogue Ales has gone with a more streamlined approach to Dead Guy Ale’s new look by boldly focusing on the skeleton.  In doing so, the updated packaging manages to be even more engaging and eye-catching on the shelf.

“There were a number of iterations, but the idea came out pretty quickly,” said Rogue’s Creative Director Hagen Moore. “We wanted to make the Dead Guy larger than life, and have him stand out in a simple and unique way.”