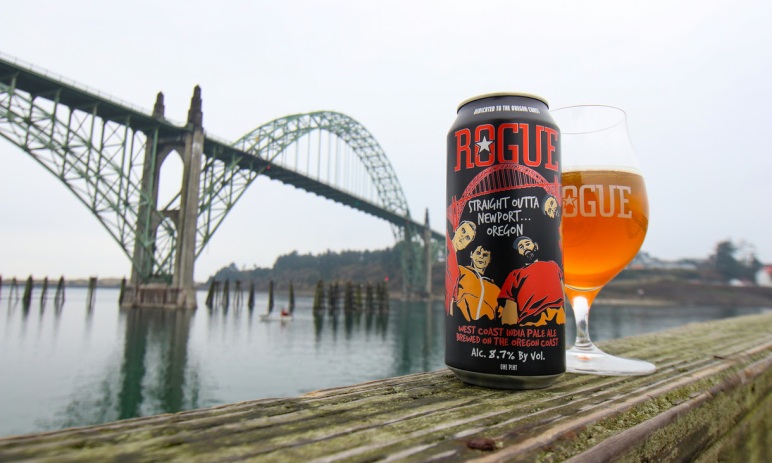 Back for a second year in a row, Straight Outta Newport . . . Oregon is a “huge” West Coast India Pale Ale that squeezes “intense notes of tropical fruit and citrus” from the featured Citra, Mosaic and Comet hops.  Clocking in at an “uncompromising” 8.7% ABV and 73 IBUs, Straight Outta Newport is sure “to satisfy the thirstiest hop heads” out there.

“This is our biggest and boldest IPA packed with ridiculous amounts of Citra, Mosaic and Comet hops,” says Innovation Brewer Michael King. “The beer upends expectations for double IPAs—it has huge hop character and flavor but is surprisingly easy to drink.”

Straight Outta Newport . . . Oregon releases in January 2019 and will hang around as long as supplies last.  You can expect to find this Limited Release offering available in 4-packs of 16 oz. cans and on draft at select craft beer-friendly establishments located in Alabama, Florida, Oregon and throughout the rest of Rogue’s nationwide distribution territory.  Prost!

Inspired to brew a beer that embodies the spirit of the Oregon Coast, the brewers at Rogue Ales developed Straight Outta Newport to be a “uniquely West Coast” style India Pale Ale featuring Citra, Mosaic and Comet hops.  Clocking in at 8.7% ABV and 73 IBUs, Straight Outta Newport supplies “a bold and flavorful profile, bursting with aromas of grapefruit, tangerine and orange, fruity hop notes and a juicy finish.”

“We’re Oregon Coast through and through,” said Rogue President Brett Joyce. “We wanted to pay homage to our hometown with a world-class beer that dared to push the limits.”

Straight Outta Newport will officially arrive in January 2018 with plans to hang around throughout that month.  You can expect to find this Limited Release available in 4-packs of 16 oz. cans and on draft at select locations found within Rogue’s distribution area.  Prost!

"The diplomats of the cafés expound: