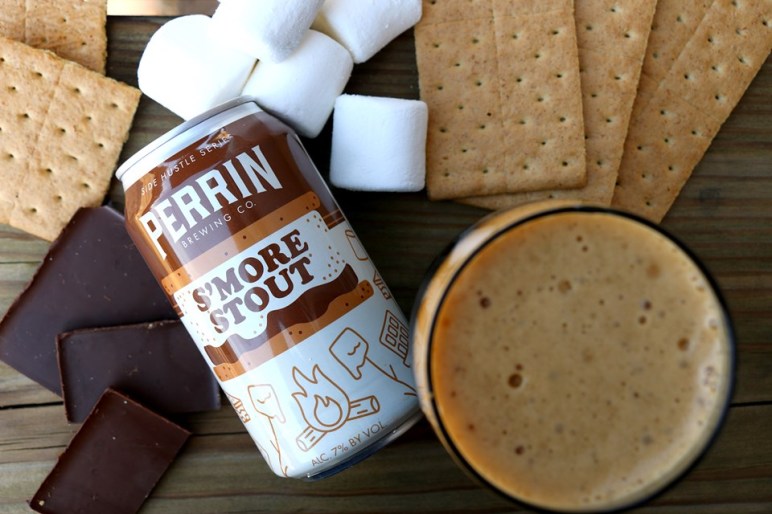 Perrin Brewing Company (Comstock Park, Michigan) has officially announced that it will begin distribution of S’more Stout, the newest offering to come out of the brewery’s Side Hustle Series, in October 2019.

Crafted to be a “7% ABV twist on your favorite fireside treat,” S’more Stout is a Milk Stout “loaded with flavors of marshmallow, graham cracker and chocolate.” With lactose supplying a “rich, creamy mouthfeel,” S’more Stout is a “toasty, desserty stout” that will certainly have you “asking for S’more!”

S’more Stout is available now at the Perrin Pub and is scheduled to enter distribution in early October 2019. You can expect to find this Limited Release offering available in 6-packs of 12 oz. cans and on draft at select craft beer-focused establishments located in Michigan only. Prost!

Perrin Brewing Company (Comstock Park, Michigan) has officially announced that it will begin the Limited Release of Pineapple Upside Down IPA, the latest installment in the brewery’s Side Hustle Series, on August 1.

Inspired by the classic cake of the same name, Pineapple Upside Down IPA is an India Pale Ale brewed with “wheat and lactose to create a creamy cake-like malt body” and balanced with “notes of tropical fruit and coconut” sourced from Sabro and Styrian Cardinal hops. To stay true to the promise of its name, Pineapple Upside Down IPA (7% ABV) was ultimately “soaked in the flavor equivalent of 500 pineapples to provide [a] sweet-and-tart citrus punch.”

Pineapple Upside Down IPA will debut in the Perrin Pub on August 1 and distribution is scheduled to follow shortly after the on-site release. You can expect to find this Limited Release available in 6-packs of 12 oz. cans and on draft at select craft beer-focused establishments located in Michigan only.  Prost! 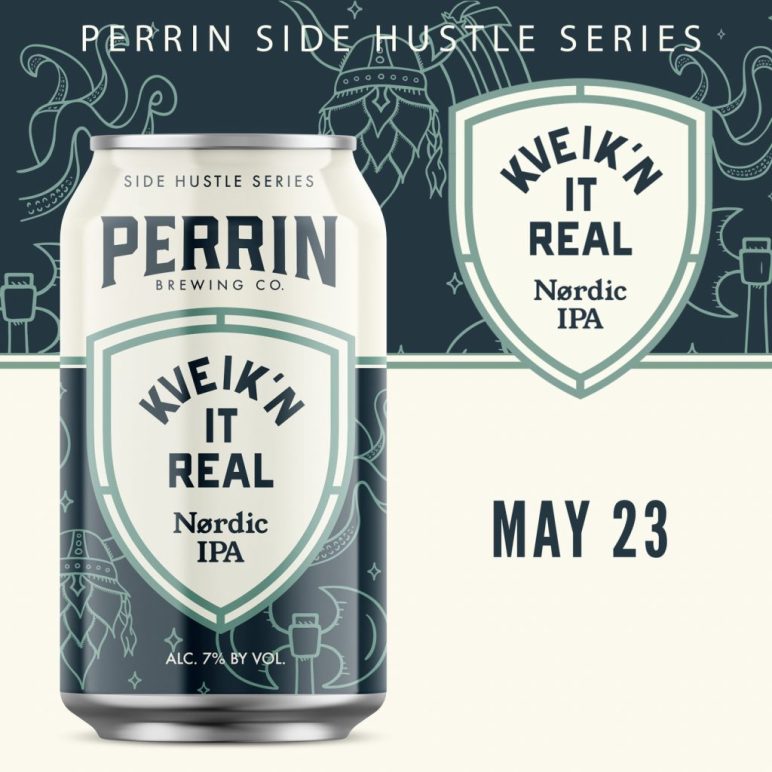 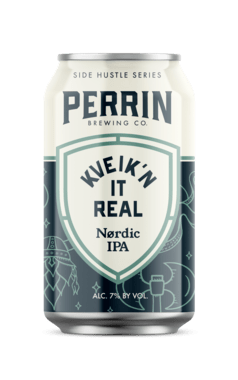 Perrin Brewing Company (Comstock Park, Michigan) has officially announced that Kveik’n It Real Nordic IPA will drop on May 23 as the brewery’s latest Side Hustle Series release.

Arriving as the third release in Perrin Brewing’s Side Hustle Series of innovative brews that “creatively explore new ingredients and techniques”, Kveik’n It Real is a Norwegian-style India Pale Ale “brewed with Norwegian farmhouse yeast, Honindal Kveik, which produces tropical fruit aromas.”  To further enhance the fruity character of the yeast, the beer was then “double dry-hopped with fruit-forward Styrian Wolf and Styrian Dragon hops to impart even more citrus and pineapple hop flavor.”  Thanks to “a delicate malt backbone of oats and wheat”, Kveik’n It Real (7% ABV) has a hazy appearance and is rounded off with a bit of balance and a soft mouthfeel.

Kveik’n It Real Nordic IPA will officially hit the Perrin Pub on May 23 and distribution is scheduled to follow shortly after the on-site release.  You can expect to find this Limited Release offering available in 6-packs of 12 oz. cans and on draft at select craft beer-friendly establishments located within Perrin’s distribution footprint in Michigan only. Prost! 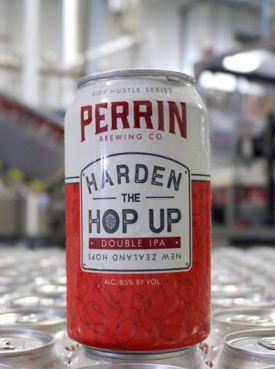 Arriving as the latest release in Perrin’s new Side Hustle Series, Harden The Hop Up is a citrus-forward Double India Pale Ale “showcasing hop varietals from New Zealand and Australia” such as Galaxy (imparts juiciness) , Ella (adds “a floral nose and slight spice”) and Enigma hops (“heighten the flavors and aromas and add notes of pinot gris”).  This “blend of rare hops” takes Harden The Hop Up (8.5% ABV) “to zesty heights of citrus perfection, highlighted with subtle stone fruit characteristics.”

Harden The Hop Up debuted in the Perrin Pub on March 28 and is scheduled to begin distribution in April 2019.  You can expect to find this Limited Release offering available in 6-packs of 12 oz. cans and on draft at select craft beer-friendly establishments located within Perrin’s distribution footprint in Michigan only.  Prost!

Back with its longest Seasonal availability to date (until March 2019), Blackberry IPA is a “combination of the tart sweetness of ripened blackberries along with an aromatic floral bouquet of fresh Michigan bittering hops.” Coming in at an easy-drinking 5% ABV and 35 IBUs, Blackberry IPA is here to offer craft beer drinkers the chance to “sit back, relax, and enjoy the change of the seasons wherever [they] are.”

This year’s batch of Blackberry IPA will officially debut in the Pub at Perrin Brewing on August 23 and will enter distribution the following week.  You can expect to find this Seasonal offering available in 6-packs of 12 oz. cans, 15-packs of 12 oz. cans and on draft at craft beer-focused establishments located in Florida, Michigan and throughout the rest of Perrin’s distribution network.  Prost! 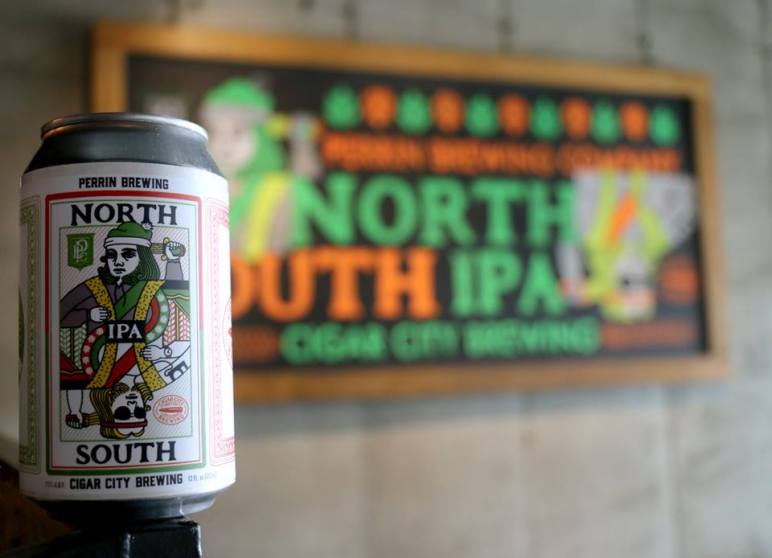 Created in recognition of Cigar City Brewing’s distribution launch in Michigan, North-South IPA was brewed by John Stewart of Perrin Brewing and Wayne Wambles of Cigar City Brewing – both Head Brewers of their respective breweries – to be “an innovative style of a New England IPA.”  With the use of Denali, Enigma, Galaxy and Citra hops, these two brewers were able to produce an offering that “takes all the aroma and hop flavor of a New England IPA to create a more stable flavored beer.”  This all results in a 7.1% ABV North-South IPA that is absolutely “packed with delicious tropical and juicy hop aromatics.”

“The beer is an innovative New England Style IPA approach with less protein haze. The overall focus of the beer is to generate a tropical characteristic from the combination of hops while also taking advantage of biotransformation by dry hopping during active fermentation.” – Wayne Wambles, Cigar City Brewing

“This beer is a unique way of making a New England Style IPA that is more stable. Taking all the positives of a NEIPA and avoiding a majority of the negatives including the instability of shelf life.” – John Stewart, Perrin Brewing

North-South IPA will debut in the Pub at Perrin Brewing on May 17 and is scheduled to enter distribution the following week.  You can expect to find this Limited Release available in 6-packs of 12 oz. cans and on draft at select craft beer establishments in the Michigan market only.  Prost! 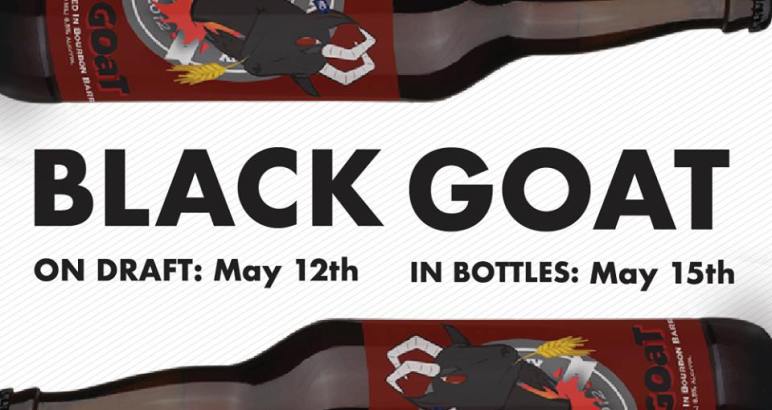 Arriving as Perrin Brewing’s third specialty bottle release of 2017, Black Goat is a “high gravity double black lager [that] was laid down and aged for several months before coming to life.”  This amped up Schwarzbier sports aromatics of vanilla, stone fruit and chocolate while featuring “a unique charred oak character and a smooth, warm caramel bourbon flavor that will exceed all taste bud expectations.” At 8.5% ABV, Black Goat is a complex lager that demands your respect and is meant for sipping.

Black Goat officially launches in the Perrin Brewing Company pub on May 12 on draft and on May 15 in 22 oz. bottles.  Shortly after the pub release, Black Goat will be available at select craft beer establishments located in Perrin Brewing’s distribution area of Florida, Michigan, Colorado, Indiana, Ohio and New York City.   If you happen to reside in these areas, be sure to check this one out later this month.  Prost!

Perrin Brewing Company (Comstock Park, Michigan) recently announced that they will soon launch distribution in Florida with the limited release of a special collaboration brew.

Ever since the brewery officially partnered with Oskar Blues Brewery in early 2015, Perrin Brewing Company has experienced “exponential growth among packaged offerings, out-of-state distribution and an increase in barrel production.”  Perrin estimates that they will have brewed over 26,000 barrels by the end of the year, “a 70% increase over 2015.”  With Tampa’s Cigar City Brewing joining the ownership team earlier this year, Perrin Brewing has decided to expand their reach to Florida now that they have a good friend in the area.

Perrin Brewing will officially begin Florida distribution in February of 2017 with the launch of a special collaboration beer.  On December 1, brewers from Oskar Blues and Cigar City visited Perrin to brew up “a one-time batch of an Imperial Oatmeal Stout, Triangulation.”  Brewed with malts sourced from all over the world and a London ale yeast strain, Triangulation is a “a big bodied, robust Oatmeal Stout” that remains “rich but approachable.”  To add a unique twist to the beer’s complexity, HBC 472 – an experimental hop – was used to lend the beer “vanilla, macaroon, and even barrel notes.”  The finished Triangulation Imperial Oatmeal Stout weighs in at an impressive 9% ABV and 60 IBUs.

John Stewart, Director of Brewing Operations at Perrin Brewing stated, “This opportunity is a great privilege to deliberately push the boundaries with this collaboration brew by layering numerous specialty malts and a multitude of experimental hops from all over the world with the specific intention of creating a complex and nuanced twist on the style.”

Triangulation Imperial Oatmeal Stout will officially release in February of 2017 when Perrin Brewing Company launches in the Florida market.  This limited release offering will be available in 4-packs of 12 oz. bottles in the brewery’s Florida and Michigan markets only.  Details about the other Perrin offerings that will be available at launch are coming soon.

Information concerning official Florida launch events for Perrin Brewing should begin to surface soon.  To ensure that we are all able to raise a glass of Triangulation in celebration of the brewery’s arrival in the Sunshine State, we will update this post with those details once we have them.  Stay tuned. Prost!