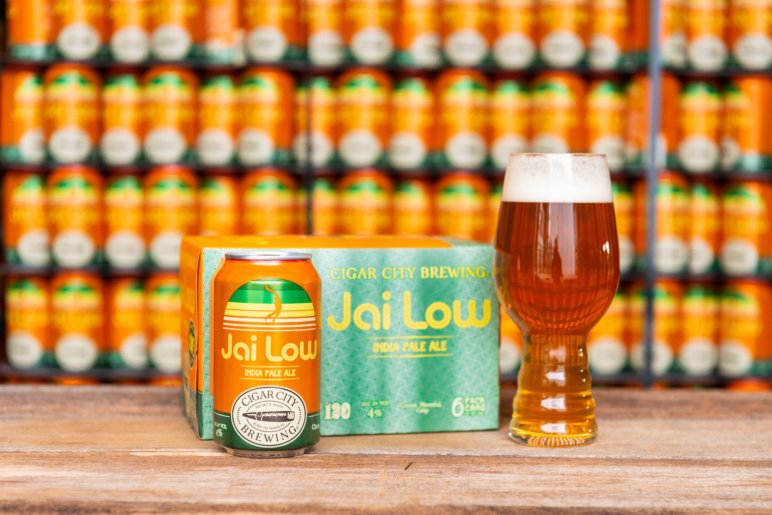 Developed to be the lower ABV, lower calorie sibling to Cigar City Brewing’s beloved Jai Alai IPA, Jai Low is a Session India Pale Ale that is “tropical and bright with a full palate of flavor and a potency designed with moderation in mind.” Clocking in at just 4% ABV and 120 calories per 12 oz. serving, Jai Low IPA possesses “all the qualities found in the finest IPAs, including citrus aromas and flavors, bread-like maltiness and a moderate, snappy bitterness . . ., making this beer a deceptively tempered addition to Cigar City Brewing’s line-up of hop-forward creations.”

Jai Low IPA is rolling out now and will be available Year-Round in 6-packs of 12 oz. cans and on draft. You can expect to find Jai Low IPA at craft beer-focused establishments located in Alabama, Florida and throughout the rest of Cigar City’s distribution territory. Prost! 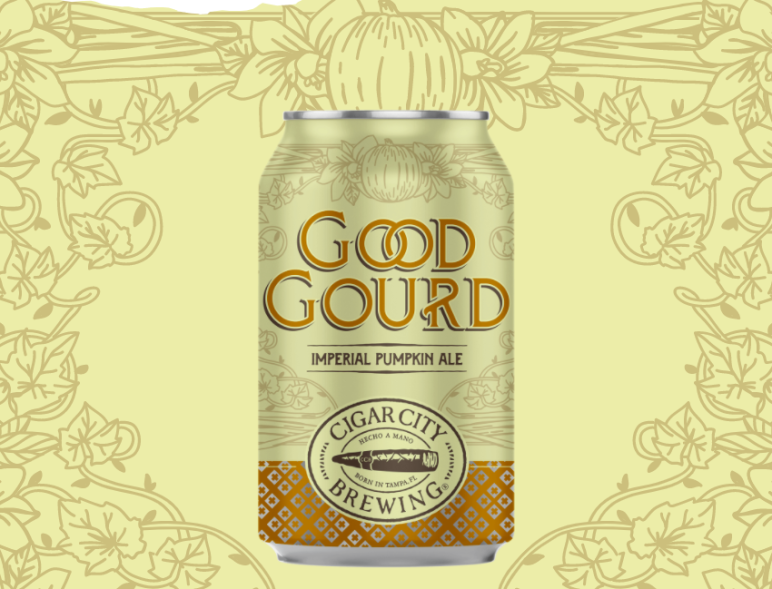 Cigar City Brewing (Tampa, Florida) has officially announced that it will begin the Seasonal Release of Good Gourd Imperial Pumpkin Ale in September 2020.

First introduced in 2011 and now a Seasonal favorite for lovers of all things pumpkin and beer, Good Gourd is an Imperial Pumpkin Ale “brewed with cinnamon, allspice, cloves, nutmeg, and vanilla to emulate the flavors of a decadent, piquant pumpkin pie.” Coming in at 8.8% ABV, Good Gourd is a “liquid monument to the glory of the pumpkin, the most noble of all the gourds.”

Good Gourd will return in September and is scheduled to stick around through December 2020. You can expect to find this Seasonal offering available in 4-packs of 12 oz. cans and on draft at select craft beer-focused establishments located in Alabama, Florida and throughout the rest of Cigar City Brewing’s distribution area. Prost! 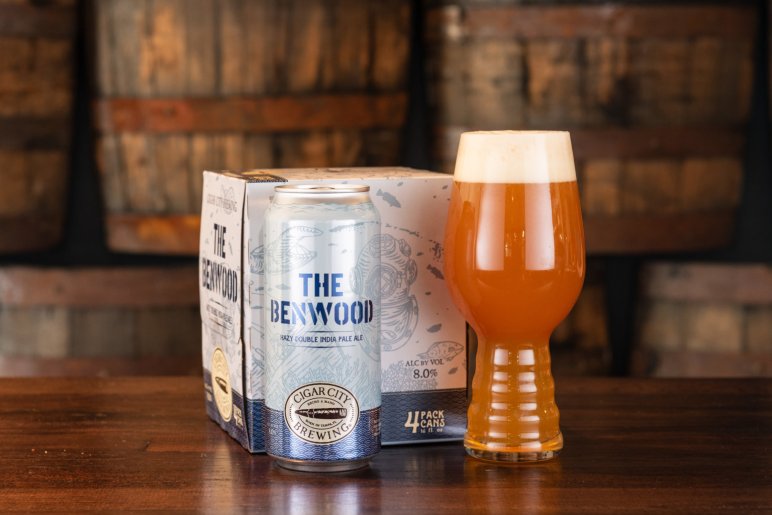 Cigar City Brewing (Tampa, Florida) has officially announced that it will begin the Seasonal Release of The Benwood Hazy Double IPA in July 2020.

Brewed as a “tribute to . . . Florida’s most famous shipwreck,” The Benwood is a Hazy/Juicy Double India Pale Ale double dry-hopped with Motueka, Galaxy, Strata and Mosaic hops. Coming in at 8% ABV and 60 IBUs, The Benwood boasts “aromas of tangerine, honeydew and pineapple” alongside flavors of “tropical fruit, lime leaf and white wine grapes.”

The Benwood is actively rolling out now and will stick around through September 2020. You can expect to find this Seasonal offering available in 4-packs of 16 oz. cans and on draft at select craft beer-focused establishments located in Florida and throughout most of Cigar City Brewing’s full distribution area. Prost!

Vital Information for The Benwood from Cigar City Brewing 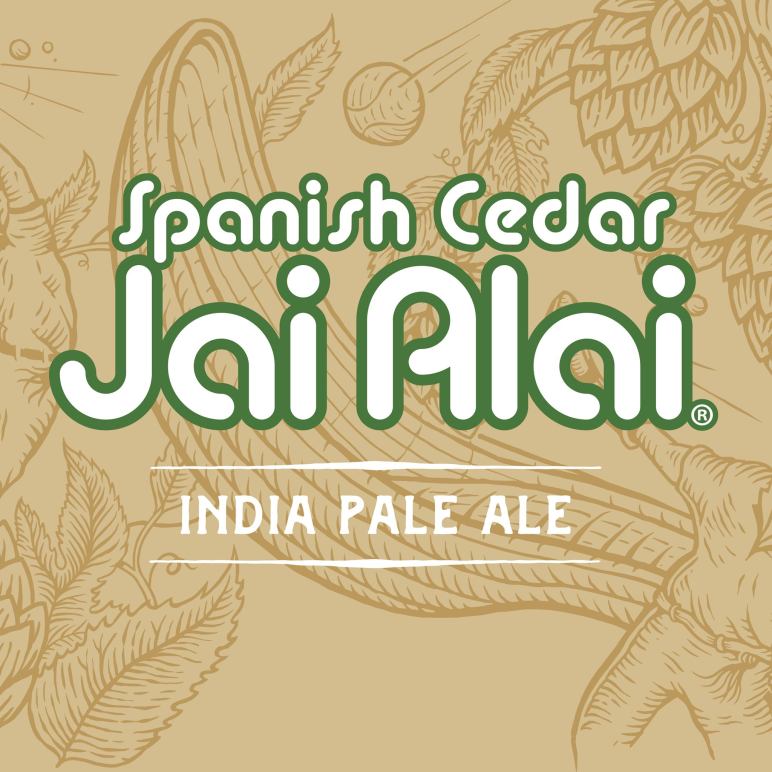 Cigar City Brewing (Tampa, Florida) has officially announced that it will introduce Spanish Cedar Jai Alai as its newest Seasonal Release in July 2020.

Originally released many moons ago under the name Humidor Series IPA, Spanish Cedar Jai Alai is an India Pale Ale that has the “bold citrus qualities of Jai Alai . . . complimented by sandalwood and cracked pepper notes imparted by Spanish cedar, the same wood used to build the world’s finest cigar humidors.” Coming in at 7.5% ABV and 65 IBUs, Spanish Cedar Jai Alai is “balanced and juicy on the palate, [has] caramel-like malt flavor [that] helps temper bitterness and spice from the wood, while the distinct flavor of cedar lingers long on the tongue.”

Spanish Cedar Jai Alai is available now and scheduled to hang around through September 2020. You can expect to find this Seasonal offering available in 4-packs of 12 oz. cans and on draft at select craft beer-focused establishments located in Florida, Alabama and throughout the rest of Cigar City’s distribution network. Prost!

Cigar City Brewing (Tampa, Florida) has officially announced that it will introduce Paloma Gose as a new Seasonal offering in April 2020.

Crafted to “celebrate Florida’s citrus history and the classic cocktail of Mexico” of the same name, Palomo Gose is German-style Sour Ale featuring additions of grapefruit, lime and salt. Coming in at a refreshing 4.2% ABV, Paloma Gose supplies its drinker with “aromas of grapefruit zest, lime leaf and Valencia orange [which are] reflected on the palate with similar flavors complimented by a grapefruit pithiness and a soft salinity. Bright, zesty, and tropical.”

Paloma Gose is rolling out now and will hang around through June 2020.  You can expect to find this new Seasonal available in 6-packs of 12 oz. cans and on draft at select craft beer-friendly establishments located in Alabama, Florida and throughout the rest of Cigar City’s distribution network. Prost! 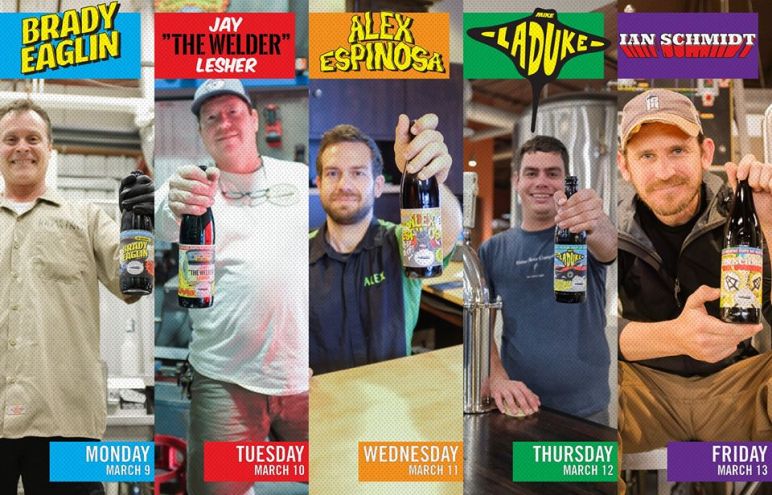 To bring some much needed attention to an all-star lineup of “long-time Cigar City Brewing employees who have helped make [the] brewery and the Tampa Bay brewing community what it is today,” Cigar City Brewing will spend the majority of Tampa Bay Beer Week releasing “one extremely limited barrel-aged beer per day, brewed to honor” on of these “unsung heroes.”  The release schedule and bottle lineup is as follows:

A few things to keep in mind if you plan to attend one (or all) of these bottle releases:

With each release only consisting of around 400 bottles, it is safe to assume that these barrel-aged brews will disappear quickly each day.  If you are excited about one (or several) of these releases, be sure to factor an 11 a.m. trip to Cigar City Brewing into your Tampa Bay Beer Week schedule on the respective release date(s) of the beer(s) that caught your attention.  Prost! 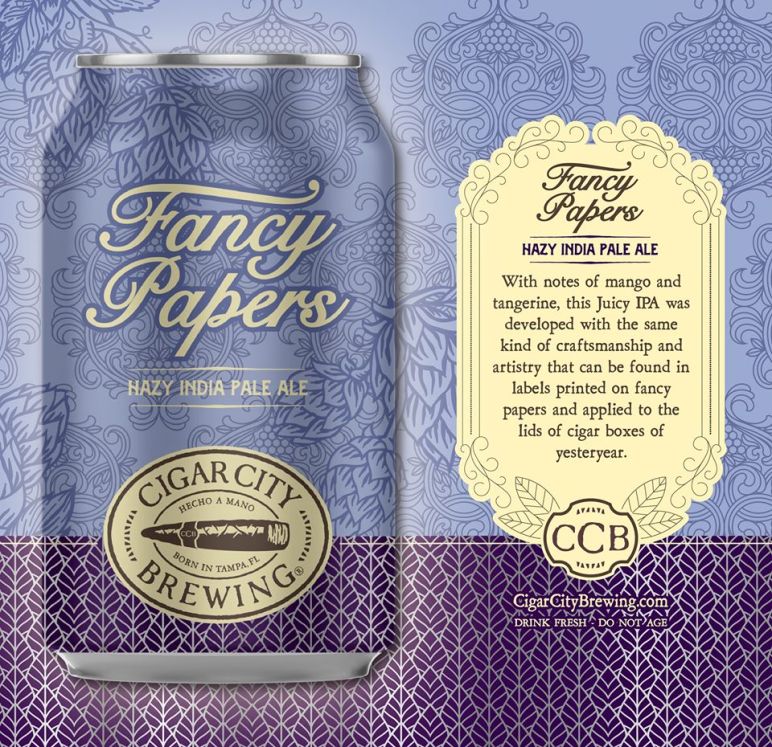 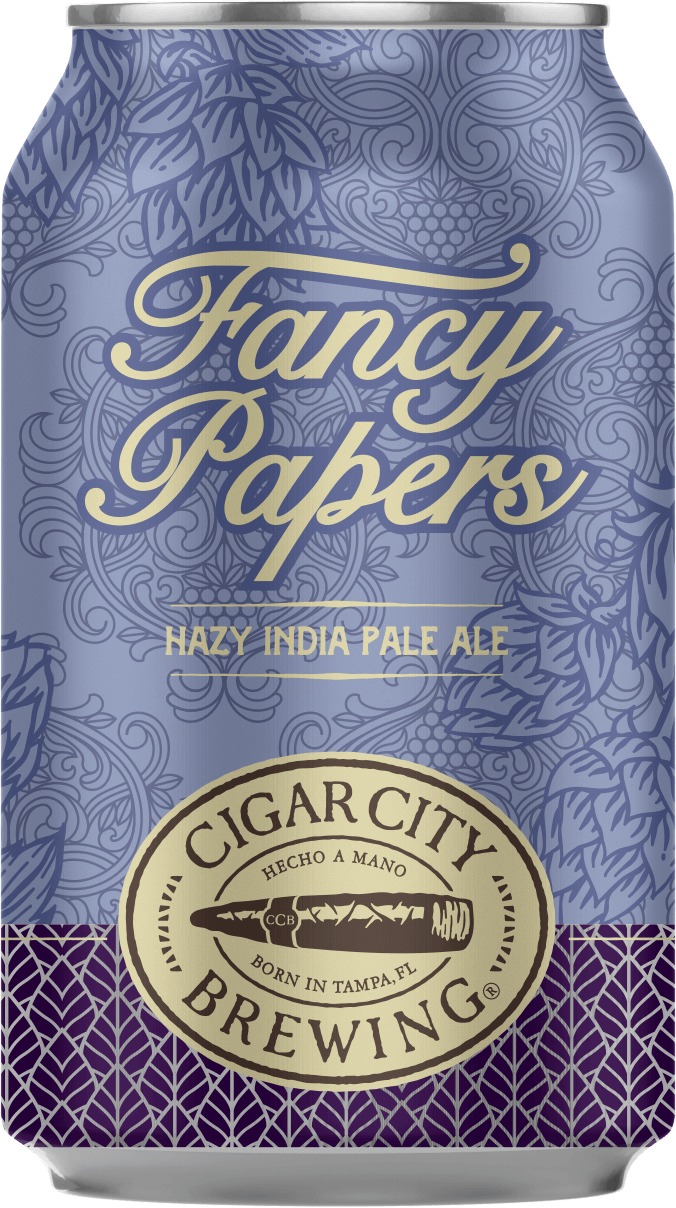 With a name inspired by the “handsome designs printed on fancy papers and applied to cigar boxes . . . to entice cigar lovers,” Fancy Papers is a Hazy/Juicy India Pale Ale that “eschews the bitterness often found in IPAs for a softness on the palate and a tropical hop expression imparted by a generous helping of . . . Sabro, Idaho 7 and Strata hops.”  To round out the recipe, Cigar City Brewing used an “expressive English ale yeast that adds notes of peach and supports the style’s signature cloudiness.” Coming in at just 6.5% ABV and 60 IBUs, Fancy Papers Hazy IPA offers “an invitingly moderate bitterness and a tempered ABV for its style.”

“While we’ve used Sabro, Idaho 7 and Strata hops separately in several small-batch beers, we’ve been blown away by the flavors and aromas we’re getting in Fancy Papers Hazy IPA now that we’ve combined these expressive hops into one beer. The English ale yeast we use to ferment Fancy Papers helps round out the flavor and bitterness of the beer and strikes a great balance between hop expression and drinkability.”

Fancy Papers Hazy IPA started rolling out in January and will be available through March 2020.  You can expect to find this new Seasonal offering available in 6-packs of 12 oz. cans and on draft at select craft beer-friendly establishments located in Alabama, Florida and throughout the rest of Cigar City’s 41-state distribution area.  Prost!

Release – Seasonal; January – March 2020
Style – Hazy/Juicy India Pale Ale
ABV – 6.5%
IBUs – 60
Featured Hops – Strata, Sabro & Idaho 7
Fun Fact – “The ‘fancy papers’ evoked in the beer’s name are the papers used to print the intricate labels found inside the lids of boxes containing the finest cigars rolled in Tampa, Florida’s Ybor City and elsewhere during the heyday of hand-rolled tobacco. As cigar manufacturing exploded in the Tampa area in the late 19th and early 20th centuries, so too did the production of embossed plain or satin-finished paper labels glued inside cigar box lids that portrayed everything from exotic animals to historical figures to classic Americana iconography. These labels are still coveted by tobacciana collectors today and remain an important part of Tampa’s cigar history, a history that informs much of Cigar City Brewing’s branding.”
Availability – 6-packs of 12 oz. cans & draft
Beer Finder – https://www.cigarcitybrewing.com/beer-finder/ 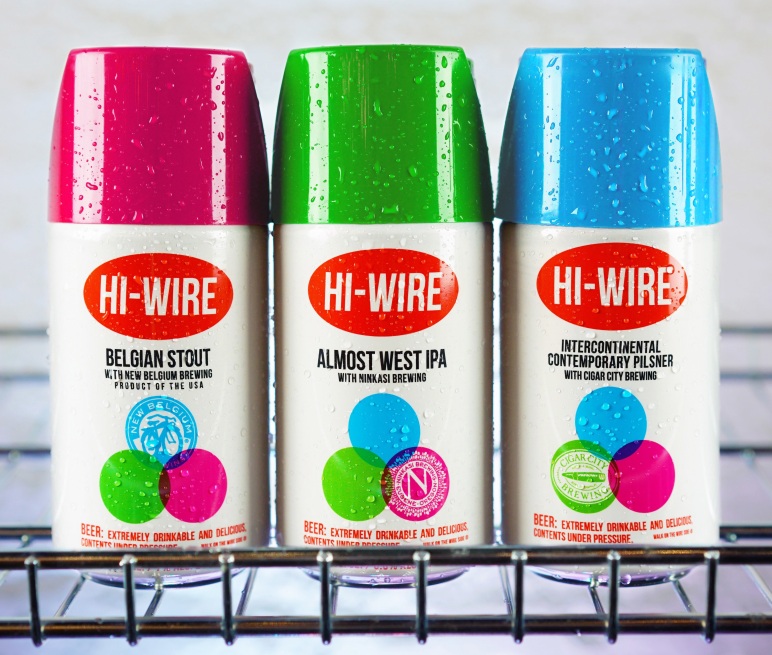 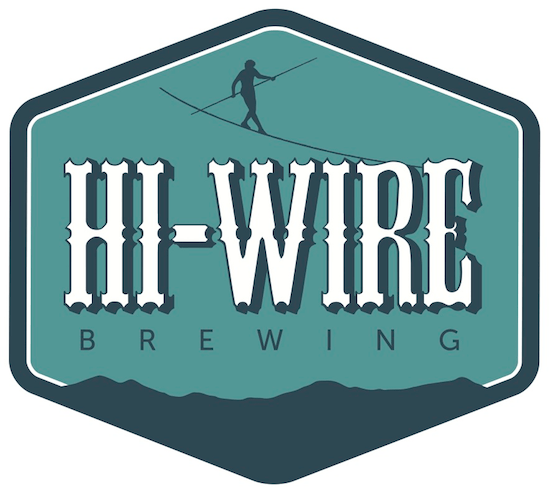 The annually released Hi-Wire Brewing Collaboration 12-Pack (a.k.a. the Spray Paint Collaboration 12-Pack) never disappoints and is always highly sought-after, but this year’s has gone next level by featuring the following three offerings brewed with true legends in the craft beer industry (descriptions sourced directly from the brewery’s press release):

**The Collaboration 12-pack will include four 12 oz. cans of each of the beers listed above.**

The Collaboration 12-pack is hitting shelves now and will hang around only as long as supplies last.  You can expect to find this Limited Release mixed 12-pack of 12 oz. cans available at select craft beer-focused establishments located within Hi-Wire Brewing’s distribution footprint in Alabama, North Carolina, South Carolina, Tennessee, Georgia, Ohio and Kentucky. Prost!

Cigar City Brewing (Tampa, Florida) has officially announced that it is starting the New Year off by adding an updated version of its beloved Florida Man Double IPA to its Year-Round portfolio.

Brewed to “pay tribute to ‘the world’s worst superhero,'” Florida Man is a Double India Pale Ale brewed with “a nearly-criminal amount” of Pacific Jade, Galaxy, Azacca, Lemon Drop and Simcoe hops that are “balanced by delicate peach esters from a unique Double IPA yeast and a dash of Canadian honey malt.”  Weighing in at 8.5% ABV and 80 IBUs, Florida Man is a “hopped-up whopper of a beer [that is] big in character and guaranteed to sear itself into your memory, just like” its namesake.

Florida Man is scheduled to enter distribution in the very near future.  You can expect to find this Year-Round brew available in 6-packs of 12 oz. cans, on draft, and in the Cigar City Brewing Mixed 12-pack of 12 oz. cans at craft beer-focused establishments located in Florida and “most of [Cigar City’s] distribution footprint in the coming weeks.”  Prost! 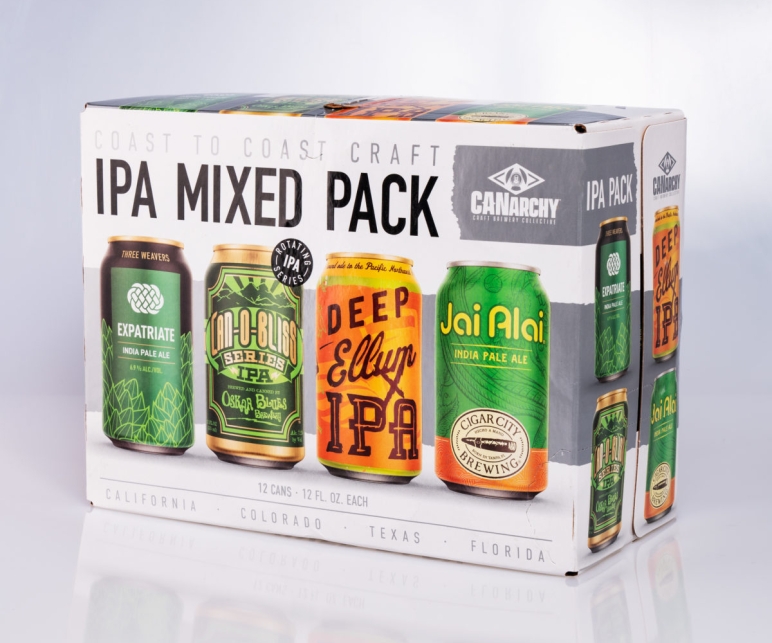 The CANarchy Craft Brewery Collective (Longmont, Colorado) has officially announced that it is actively rolling out its new CANarchy IPA Mixed Pack, a variety 12-pack containing IPAs from four independent craft breweries located across the U.S.

Compiled to show the IPA’s “diversity of style and flavor,” the latest edition of the CANarchy IPA Mixed Pack gives hopheads the ability “to travel from the bright West Coast style of California, to the big, bold hop flavors of Texas, through Florida’s citrusy, balanced flavors and onto Colorado’s innovative creations – all in one box.”  The CANarchy IPA Mixed Pack contains the following offerings (descriptions sourced directly from CANarchy’s press release):

**The CANarchy IPA Mixed Pack contains three 12 oz. cans of each the beers listed above**

The new CANarchy IPA Mixed Pack is available now in select markets and will hit nationwide distribution “soon.” You can expect to find this Variety 12-pack at select craft beer-focused retailers located throughout the U.S. Prost!