All set for next year, Founders Brewing Co. (Grand Rapids, Michigan) has officially released a 2018 Availability Calendar that is absolutely loaded with new brews, old favorites, and updated packing options.

Just as we always do with all release calendars, Founders Brewing Co.’s full 2018 Availability Calendar is posted below for you to look over at your own pace.  Before we turn you loose, there are a few things on that calendar that we are just dying to point out . . . so let’s knock that out real fast:

Alright, that’s a wrap on all that we wanted to cover.  Be sure to check out the full calendar below so that you can properly prepare for an amazing 2018 with Founders Brewing Co. Prost! 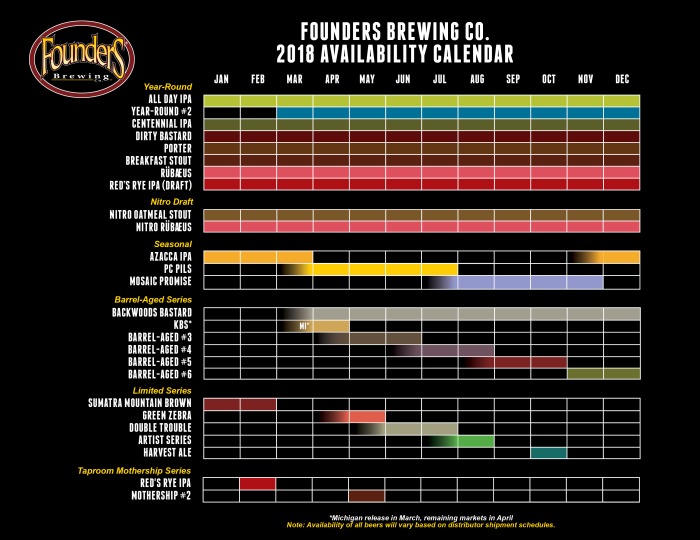 Since it has achieved a RateBeer score of 99 and locked down “back-to-back medals at the Great American Beer Festival in 2015 and 2016 in the Imperial Red Ale category (gold and silver, respectively)”, it is quite obvious that reDANKulous has endeared itself to the hop-loving masses.  With a “striking red hue and subtle sweetness . . . courtesy of the Caramalt and roasted barley,” this Imperial Red India Pale Ale reaches true “dank” status thanks to a hop bill featuring Mosaic, Chinook and Simcoe hops.  This combination of ingredients results in a 9.5% ABV and 90 IBU hop experience that is spicy, piney, tropical and simply reDANKulous.

“If you’re wondering what dank means in this beer, think lingering sensory overload,” said Co-Founder and President Dave Engbers. “It really says something that this style has become a crowd favorite of judges and hop heads alike. Jeremy and our team of brewers love to experiment with new varieties, combinations and techniques – because of that reDANKulous exudes our ‘brewed for us’ philosophy.”

ReDANKulous Imperial Red IPA officially releases on June 1 and will be available through September.  This Specialty offering can be found in 4-packs of 12 oz. bottles (suggested retail price of $11.99) and on draft at craft beer establishments located in Alabama, Florida, Michigan and throughout the rest of Founders Brewing Co.’s 46 state distribution network. Prost!