Funky Buddha Brewery (Oakland Park, Florida) has officially announced that it will begin the Limited Release of S’more to Love Imperial Porter on Saturday, August 31.

Developed to capture the joy of s’mores and all the campfire vibes that come with them, S’more to Love is an Imperial Porter “brewed with smoked malts then piled high with cocoa nibs, aromatic cinnamon, and gooey vanilla.”  Weighing in at 9.5% ABV, S’more to Love is sure to be the cold one that will keep you warm on autumn nights.

S’more to Love will officially debut in Funky Buddha’s Tap Room on August 31 and distribution is scheduled to follow shortly after the on-site release.  You can expect to find this Limited Release available in 16 oz. cans and on draft at select craft beer-friendly establishments located in Florida and throughout the rest of Funky Buddha’s distribution footprint.  Prost!

Vital Information for S’more to Love from Funky Buddha Brewery

Funky Buddha Brewery (Oakland Park, Florida) has announced that Save Some Room For Later, a German chocolate cake-inspired beer, will begin hitting craft beer shelves and taps on September 1.

First released in bottles back in 2017 as a part of Funky Buddha’s four-year anniversary celebration, Save Some Room For Later (8.8% ABV) is back to bring its decadent German chocolate cake-like experience to the brewery’s Little Buddha Small Batch Series.  This Imperial Brown Ale boasts rich “layers of creamy chocolate, sweet coconut, and fragrant vanilla”, a combination that will easily motivate many pastry beer fans to “save some room for later”.

Save Some Room For Later will officially debut in Funky Buddha’s Tap Room on September 1 and will enter distribution shortly after that date.  You can expect to find this Little Buddha Small Batch offering available in 22 oz. bottles and on draft at select craft beer establishments located in Florida and throughout the rest of Funky Buddha’s steadily growing distribution area.  Prost!

Previously only available as a draft-only taproom exclusive, Black Currant Tripel Lindy (9.3% ABV) has become such a hit with Funky Buddha’s fans and employees that it will now experience its first distributed release as a Little Buddha Small Batch offering.  Brewed with a “complex blend of malts and 100% real sugar”, this Belgian-style Tripel offers a “pilsner-like . . . body and appearance” while an “addition of black currants balances malty sweetness and Belgian esters with a tart, refreshing finish.”

Black Currant Tripel Lindy will officially debut in Funky Buddha’s Tap Room on June 30 and will enter distribution shortly thereafter.  You can expect to find this Little Buddha Small Batch offering available in 22 oz. bottles and on draft at select beer-focused establishments located in Florida and throughout the rest of Funky Buddha’s steadily growing distribution area. Prost! 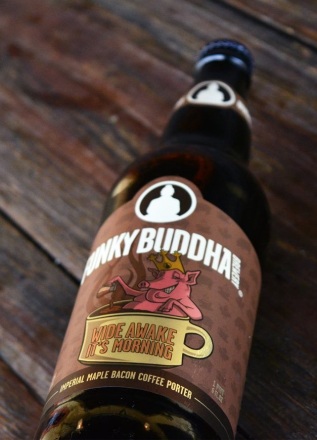 Returning to serve as the next release in Funky Buddha’s Little Buddha Small Batch series, Wide Awake It’s Morning gives breakfast a boost by treating beer lovers to an imperialized version of the brewery’s infamous Maple Bacon Coffee Porter.  This indulgent Imperial Porter goes next level by adding “some girthy gravity to the smokey, salty, rich combo of maple syrup, fresh roasted coffee, and bacon.”  Weighing in at 9.5% ABV and 40 IBUs, Wide Awake It’s Morning is one eye-opener that can absolutely hold its own on any breakfast – or dessert – table.

Wide Awake It’s Morning will officially release in Funky Buddha’s Tap Room on April 29 and enter distribution shortly thereafter.  You can expect to find this Little Buddha Small Batch offering available for a limited time in 22 oz. bottles and on draft at select beer-friendly retailers, bars and restaurants located in Florida and throughout the rest of Funky Buddha’s steadily growing distribution footprint.  Prost! 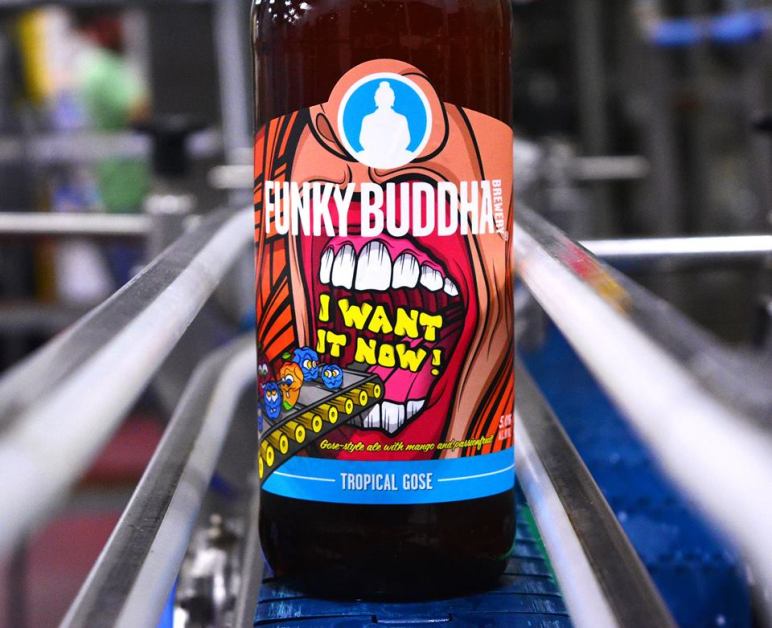 Funky Buddha Brewery (Oakland Park, Florida) has officially announced that it will release I Want It Now! Tropical Gose on Sunday, March 18 as the latest offering from the brewery’s Little Buddha Small Batch Series.

Originally created in 2013 to be “a super juicy ‘snozzberry gose'”, I Want It Now! has since morphed a bit to become a “tasty and tart gose . . . brewed with real mango and passion fruit juices.”  Finished off with a dose of kettle salts to lend “a refreshing, complex quality to this tart concoction”, I Want It Now! (5% ABV) comes together to be a thirst-quenching “easy drinker with just enough tropical fruit to tame its tart nature.”

I Want It Now! will initially release in Funky Buddha’s Tap Room at 11:30 a.m. on March 18 and distribution will follow shortly thereafter.  Once in distribution, you will be able to find this Little Buddha Small Batch offering available in 22 oz. bottles and on draft at select beer-friendly establishments located in Florida and throughout the rest of Funky Buddha’s steadily expanding distribution area.  Prost!

Vital Information for I Want It Now! Tropical Gose from Funky Buddha Brewery

Funky Buddha Brewery (Oakland Park, Florida) has announced that Butta’ Cup, a Peanut Butter Cup Double Brown Ale, is scheduled to return in mid-October as the next installment in the brewery’s Little Buddha Small Batch series.

Arriving just in time for Halloween, Funky Buddha’s Butta’ Cup “takes two star-crossed flavors – sweet chocolate and salty peanuts – and joins them with a delectable double brown ale for a moment of pure destiny.” Weighing in at 8.8% ABV, this adults-only sweet treat is guaranteed to satisfy those peanut butter cup cravings better than anything you’ll find in a snack size candy wrapper.

Butta’ Cup will officially release on Sunday, October 15 in Funky Buddha Brewery’s taproom, and then hit statewide distribution shortly thereafter.  You can expect to find this Limited Release offering available in 22 oz. bottles and on draft at craft beer establishments located within Funky Buddha’s distribution area in Florida.  Prost!

Released twice a year as Funky Buddha’s way of bookending both ends of Florida’s “colder” months, Last Snow is a “rich, creamy porter . . . layered with coconut and freshly-roasted coffee for a taste that recalls a winter wonderland.”  Big in flavor but still clocking in at a reasonable 6.4% ABV, Last Snow Coconut & Coffee Porter is the perfect beer to help all those in the Sunshine State get through the harsh sub-75° temperatures headed their way. 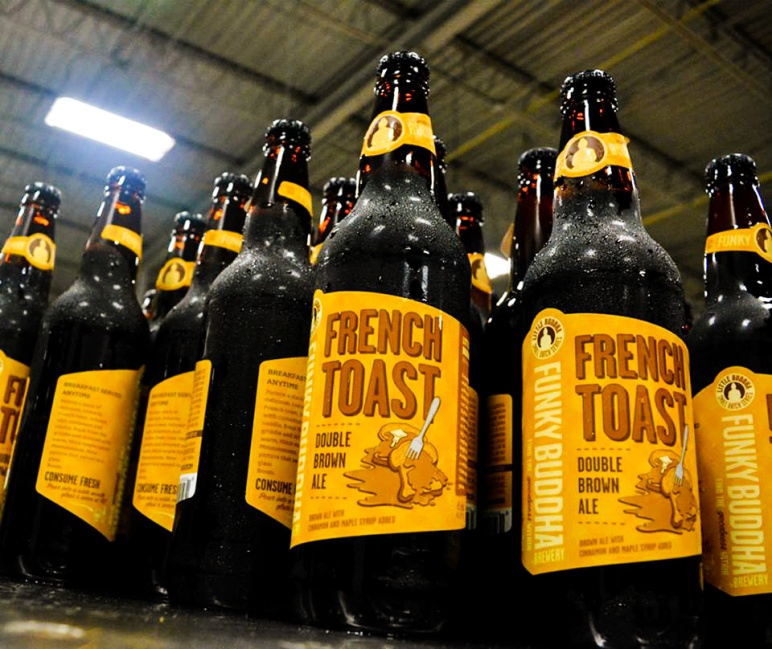 Beer and breakfast collide once again now that Funky Buddha is ready to unleash the 2017 batch of French Toast Double Brown Ale.  Brewed with cinnamon and maple, this Imperial Brown Ale is meant to mimic the experience of sitting down to a plate full of “custardy French toast, infused with cinnamon and vanilla, fresh from the griddle and drizzled with warm maple syrup.”  At 8.8% ABV, French Toast Double Brown Ale is a sweet sipper that gives you one more excuse to enjoy breakfast for dinner.

French Toast Double Brown Ale will officially release in Funky Buddha’s tap room on June 18 at 11:30 a.m. During the release event, 22 oz. bottles will be available for $10 each with a limit of one case per person.  Shortly after the brewery release, French Toast Double Brown Ale will see limited availability in bottles and on draft at select craft beer establishments located within Funky Buddha’s distribution network in Florida.  Prost!

If you happened to read my Tasting Notes on the September release of Last Snow Coconut & Coffee Porter and have been eager to give it a try, your next opportunity is fast approaching as Funky Buddha Brewery prepares to release it once again later this month.  Brewed as a Little Buddha Small Batch release that acts as “an ode to that special time in Florida where the needle dips just south of 75,” Last Snow is a 6.4% ABV American Porter “layered with coconut and freshly-roasted coffee for a taste that recalls a winter wonderland.”

Last Snow Coconut & Coffee Porter will officially release in 22 oz. bottles and on draft in the Funky Buddha taproom on Sunday, February 19.  Shortly after the taproom release, this limited offering will then be distributed to select craft beer establishments throughout the state of Florida.

To add a little variety to your Last Snow experience this time around, Funky Buddha plans to also release two barrel-aged variants of this fan-favorite brew.  Bourbon Barrel-aged Last Snow and Rum Barrel-aged Last Snow will hit the brewery taproom and limited distribution in early March.  Stay tuned for more information on these two.

With each release, Last Snow Coconut & Coffee Porter is guaranteed to disappear from shelves and taps with a quickness.  Be sure to touch base with the folks at your favorite bar/bottle shop, follow their social media accounts for release updates, and just stay vigilant so that you do not miss your chance to lock down a bottle or pour of this delicious Porter when it hits later this month.  Prost!