Another week brings with it another wave of beer calendars, and this one is kicking off with the 2020 Release Schedule from Funky Buddha Brewery (Oakland Park, Florida).

In keeping with our approach to beer calendar season, we have posted Funky Buddha Brewery’s full 2020 Release Schedule below for you to thumb through at your own pace. With that said, there is a good amount of news (both on and off the official schedule) that we would like to clue you in on first.  Let’s get at it:

That should just about cover all the items that we wanted to go over, but there is still plenty of fun stuff left for you to find on the calendar below.  Make sure to give it a good look so that you can be fully prepared for the year ahead with Funky Buddha Brewery.  Prost! 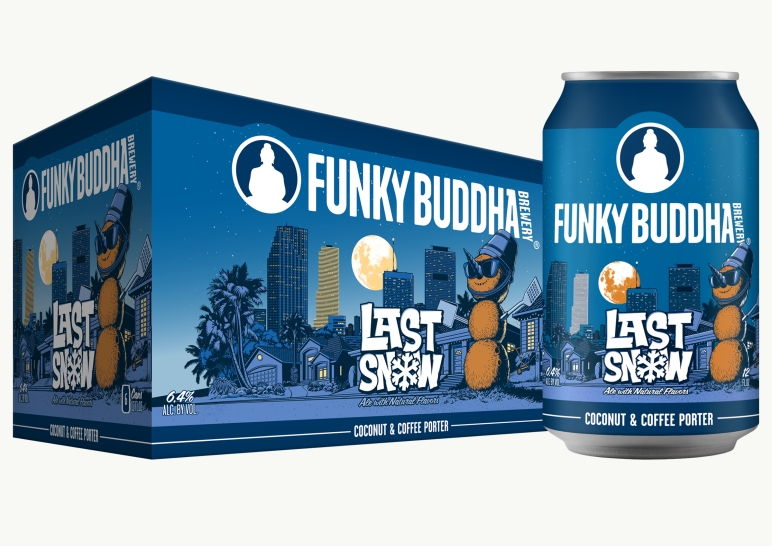 Funky Buddha Brewery (Oakland Park, Florida) has officially announced that its fan-favorite Last Snow Coconut & Coffee Porter will be available for the first time in 6-packs of 12 oz. cans when it makes its Seasonal return in mid-November 2019.

Released each year as an “ode to that special time in . . . Florida where the needle dips just south of 70° – even for the briefest of moments,” Last Snow is a “rich and creamy” American Porter “layered with coconut and freshly-roasted coffee.”  Coming in at a smooth 6.4% ABV, Last Snow boasts a “taste that recalls a winter wonderland – even if that’s just a state of mind.”

If you happen to be unfamiliar with Last Snow, you are missing out.  Check out the accolades this tasty brew has racked up over the years:

Last Snow is scheduled to hit the Tap Room at Funky Buddha Brewery on November 16 and will enter distribution shortly after the on-site release.  You can expect to find this Seasonal offering available in 6-packs of 12 oz. cans – a new packaging format for the 2019 release – and on draft at select craft beer-friendly establishments located in Florida, Alabama and throughout the rest of Funky Buddha’s distribution footprint.  Prost! 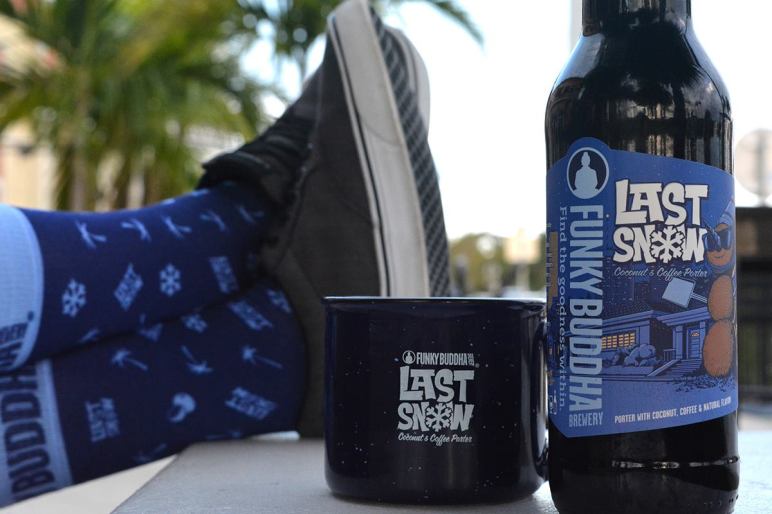 Released twice a year as Funky Buddha’s way of bookending both ends of Florida’s “colder” months, Last Snow is a “rich, creamy porter . . . layered with coconut and freshly-roasted coffee for a taste that recalls a winter wonderland.”  Big in flavor but still clocking in at a reasonable 6.4% ABV, Last Snow Coconut & Coffee Porter is the perfect beer to help all those in the Sunshine State get through the harsh sub-75° temperatures headed their way.

If you happened to read my Tasting Notes on the September release of Last Snow Coconut & Coffee Porter and have been eager to give it a try, your next opportunity is fast approaching as Funky Buddha Brewery prepares to release it once again later this month.  Brewed as a Little Buddha Small Batch release that acts as “an ode to that special time in Florida where the needle dips just south of 75,” Last Snow is a 6.4% ABV American Porter “layered with coconut and freshly-roasted coffee for a taste that recalls a winter wonderland.”

Last Snow Coconut & Coffee Porter will officially release in 22 oz. bottles and on draft in the Funky Buddha taproom on Sunday, February 19.  Shortly after the taproom release, this limited offering will then be distributed to select craft beer establishments throughout the state of Florida.

To add a little variety to your Last Snow experience this time around, Funky Buddha plans to also release two barrel-aged variants of this fan-favorite brew.  Bourbon Barrel-aged Last Snow and Rum Barrel-aged Last Snow will hit the brewery taproom and limited distribution in early March.  Stay tuned for more information on these two.

With each release, Last Snow Coconut & Coffee Porter is guaranteed to disappear from shelves and taps with a quickness.  Be sure to touch base with the folks at your favorite bar/bottle shop, follow their social media accounts for release updates, and just stay vigilant so that you do not miss your chance to lock down a bottle or pour of this delicious Porter when it hits later this month.  Prost!

Released twice a year -typically in February and September – as a Little Buddha Small Batch offering, Last Snow is Funky Buddha’s way of book-ending the harsh, sub-70 degree “winters” experienced in Florida.  This “rich, creamy Porter” is brewed with “coconut and freshly-roasted coffee for a taste that recalls a winter wonderland.”  Although packed with flavor, the beer’s surprisingly low 6.4% ABV creates an easy-drinking experience that you can enjoy all season long.  Since Last Snow happens to be one of Funky Buddha’s more popular releases, odds are that bottles from this last release have all been bought up by now.  Hope still remains though.  I have recently seen this brew available on draft at a few beer bars and growler stations around Tampa, and Funky Buddha has it listed as “On Tap Now” at the brewery’s taproom.

Alright, enough talk.  It’s time to open this bomber, pretend drinking this beer is “work” and take down some Tasting Notes!

Appearance: Last Snow fills the glass with an incredibly glossy black, completely opaque body.  Held to direct light, the color holds with just a tinge of rusty brown presenting itself at the extreme edges of the liquid.  The beer is too dark to identify a carbonation level.  The pour produced two fingers of light brown foam.  This head is loose and eventually dissipates to allow the beer’s darkness to shine from all angles.

Aroma:  As my nose approaches the glass, I am delighted to be greeted by a spot-on toasted coconut aroma.  This note is rich and downright intoxicating.  Roasted coffee and fine chocolate soon emerge to swirl about and provide an added level of decadence to the coconut.  A slight caramelized brown sugar presence then develops to round off an aromatic profile that is ridiculously reminiscent of German chocolate cake.  Simply amazing.

Taste: The luxurious, rich and flavorful toasted coconut icing you find on German chocolate cake leads the way, but the beer then begins to take on another identity as it opens up.  The coffee assumes a larger role here by providing a hefty dose of beautiful roast and subtle bitterness.  Dark chocolate rides that bitterness out and lays down a bit of sweetness as well. Caramel, toffee and bit of hazelnut finishes the experience off.

Mouthfeel:  Medium bodied with a moderate carbonation level, this Porter proves to be much lighter than you would ever expect.  The beer does cling to the palate a bit, but this is a welcomed characteristic because it allows you to bask in each and every note provided by the flavor experience.  The ABV is surprisingly light and well hidden.  Notes of coconut and coffee linger as the aftertaste.

Final Thoughts:  So . . . yeah, I can easily declare that Last Snow Coconut & Coffee Porter is one of the best flavored Porters I have encountered during my lengthy craft beer journey.  Until now, I have never experienced such a fresh and clean coconut flavor in a finished beer.  Usually there is a bit of a plastic-like, artificial character to the coconut that just can’t seem to be circumvented.  This is not the case here because Funky Buddha obviously figured it out and absolutely nailed it.  The coconut note would be enough to sell me on this brew, but then we have that coffee presence.  Coming across beautifully roasted and high-end, the aromatics and flavors of the chosen coffee are the perfect complement to that coconut.  The final surprise – and possibly the most impressive feat achieved by this offering – is that so much flavor was stuffed into a pretty low ABV Porter.  So many breweries would have pushed this thing to the area of 10% or above without a second thought, but not Funky Buddha.  It is clear that they took their time with Last Snow, laid it down gently in the sweet spot, and effectively killed it with laser-guided precision.  I want more.  Now.  Please?  Prost! 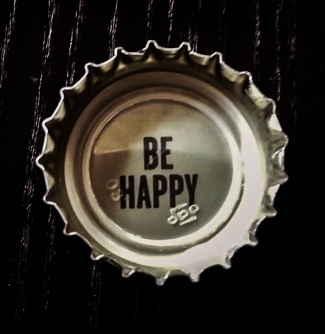