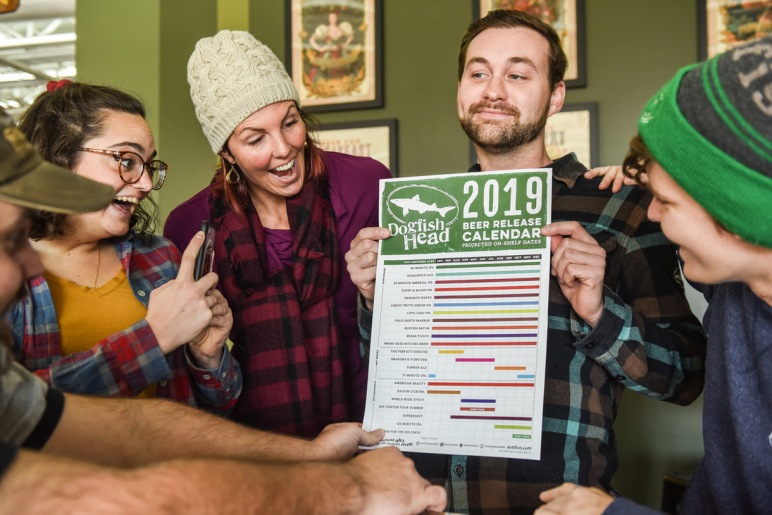 Confident that they are headed into their “best year yet”, the folks at Dogfish Head Craft Brewery (Milton, Delaware) are backing up that claim with the announcement of their 2019 Beer Release Calendar.

Just as we do with all brewery calendar-related news, we have posted Dogfish Head’s full 2019 Beer Release Calendar below for you to take in on your own.  With that said, we should probably quickly go over just a few of the many noteworthy releases Dogfish Head plans to treat us to in 2019.  Let’s get to it:

That wraps up just about everything we wanted to cover, but there are still quite a few exciting brews left for you to find on the calendar below.  Soak it all in and start getting yourself prepared for all the Off-Centered goodness headed your way in 2019.  Prost! 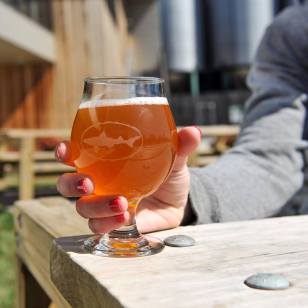 Dogfish Head Craft Brewery (Milton, Delaware) released its 2018 Beer Calendar today, and with that comes the exciting news that the brewery’s next band collaboration will be Dragons & YumYums with The Flaming Lips.

Alright, we all know the drill by now.  Dogfish Head’s full 2018 Beer Calendar is posted below for you to go over at your leisure, but you best believe that we are going to first give you some details on that new collaboration with The Flaming Lips and a few other releases headed your way next year.  Let’s get to it:

“The Flaming Lips are one of the most innovative and collaborative bands of all time and Dogfish shares a similarly playful and adventurous point of view,” says Sam Calagione, CEO and founder of Dogfish Head Craft Brewery. “Their art is a full-on otherworldly sensory experience and we strive to create that same intense sensational experience for craft beer drinkers in the development of our liquid art.” Good tunes and great beer are at the heart of Dogfish as the brewery composed a musically inspired series of brews with artists like Miles Davis, Deltron 3030, The Grateful Dead, Pearl Jam and Guided by Voices. “Our brewery has been obsessed with music since the day we opened,” says Calagione. “And we have enjoyed every opportunity to weave together the art of brewing with our love of music, as often and meaningfully as we can.”

That should cover just about everything we wanted to go over, but there are still plenty of amazing beers left to discover on the calendar below.  Give it a good look and get ready for another ridiculously good year of craft beer from Dogfish Head Craft Brewery.  Prost! 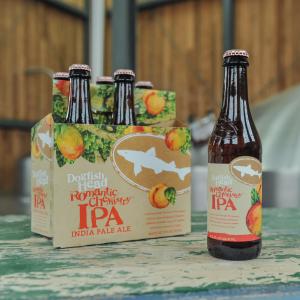 To satisfy any hop hankerings you may encounter this summer, Dogfish Head has you covered with the Seasonal release of Romantic Chemistry IPA.  This “serious” American India Pale Ale (7.2% ABV and 40 IBUs) gets its amplified level of refreshment thanks to being “brewed with an intermingling of mangos, apricots, hops, ginger, and a beautiful essential oil called myrcene which overlaps with all the components.”  After a dry-hopping with three hop varieties, the beer rounds off with “a tropical fruit aroma and a hop-forward finish.”  Romantic Chemistry is available now and will be hanging around through the month of August.  You can find this Seasonal brew available in 6-packs of 12 oz. bottles and on draft at craft beer establishments in Alabama, Florida, Delaware and throughout the rest of Dogfish Head’s distribution footprint.

“We’ve been experimenting with fruit and citrus IPAs since 1996 when we released Aprihop, an IPA brewed with apricots,” says Sam Calagione, founder and CEO of Dogfish Head Craft Brewery. “Fruit IPAs continue to be the biggest breakout craft beer style in America and we’re proud of the innovative, fruit-centric IPAs we have available now in both Romantic Chemistry in bottles and Flesh & Blood in cans.” 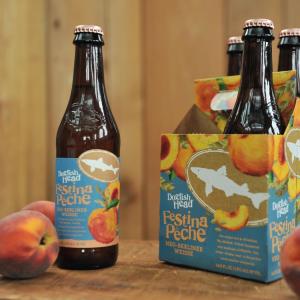 First brewed back in 2007, Festina Pêche has certainly earned its craft beer street cred by being one of the earliest widely-available American representations of the Berliner Weisse style.  Lovingly dubbed “a tart and refreshing neo-Berliner Weisse,” Dogfish Head’s take on the style is “brewed to deliver a green apple-like tartness flavor balanced with sweet peachy goodness.”  Clocking in just 4.5% ABV and 8 IBUs, this pale straw-colored ale “is unique in that the fruit complexity is woven into the aroma and taste through the natural fermentation of the peach sugars.”  Officially releasing on May 7, Festina Pêche will be available in 4-packs of 12 oz. bottles and on draft through August.  Like Romantic Chemistry IPA, Festina Pêche will also be available at craft beer focused restaurants, bars and retailers located within Dogfish Head’s distribution network.

“We started brewing Festina Peche back in 2007 and a full decade later, it continues to be one of our top selling, most requested beers by our fans,” says Calagione. “When you relax, unwind and slow down on the beach with loved ones this summer, you should do so deliberately, without haste, and with a Festina Peche in your hand.”

Romantic Chemistry IPA and Festina Pêche Neo-Berliner Weisse will only be available during the summer months, so just keep these two options in mind when you are on the hunt for refreshing brews capable of beating back the inevitable heat headed your way.  Prost!