Great Divide Brewing Company (Denver, Colorado) has officially announced that it will introduce Margarita Gose as its latest Tank Farm Series release in May 2020.

Brewed to “[capture] the vibe of a poolside cabana,” Margarita Gose is a “traditional sour German ale . . . partially aged in tequila barrels and enhanced with lime puree, makrut lime leaf and Himalayan pink salt.” Coming in at 5.8% ABV, Margarita Gose is ” tart and dry with an abundance of citrus notes.”

Margarita Gose will debut in early May and is scheduled to hang around through July 2020.  You can expect to find this new Limited Release offering available in 6-packs of 12 oz. cans and on draft at select craft beer-focused establishments located in Alabama, Florida, Colorado and throughout the rest of Great Divide’s distribution area.  Prost!

Great Divide Brewing Company (Denver, Colorado) has officially announced that it will begin the Limited Release of Coffee Porter, a special collaboration with Pablo’s Coffee, in February 2020.

Surfacing as the latest offering to come out of Great Divide’s Tank Farm Series, Coffee Porter is an American Porter brewed with coffee beans sourced from Mexico and provided by Pablo’s Coffee.  To put a Great Divide spin on the added coffee, these green coffee beans were aged in whiskey barrels that once held the 2019 edition of Barrel Aged Yeti Imperial Stout before being roasted by Pablo’s Coffee and integrated into the Porter.  This “unique, multi-step process” results in a Coffee Porter (6.5% ABV) that is “the perfect pairing of coffee and beer.”

“We’ve utilized Pablo’s beans for our beers and our coffee makers here at Great Divide for years,” said marketing manager, Matt Sandy. “When we contemplated brewing a coffee porter, Pablo’s was the obvious choice and we brainstormed a process to give this particular coffee porter a little extra prestige.”

“We chose organically grown Mexican coffee produced by Serranos for its inherent chocolate and caramel sweetness and low moisture content,” explained Pablo’s Head Roaster/Green Buyer, Brian Gerhard. “We tasted the beans as they slowly absorbed the inherent Yeti and whiskey flavors from the barrels, rotating them regularly to ensure that each bean had adequate contact time with the barrel. At the 7-day mark we were ready to roast. We went with a smaller than normal, fast roast to try and maintain the wonderful whiskey and oak aromatics. We couldn’t be happier with the end result of both the coffee and the beer.”

Coffee Porter debuted at Great Divide’s Tap Room locations on January 31 and will enter distribution in February.  You can expect to find this new Limited Release offering available in 6-packs of 12 oz. cans and on draft at craft beer-friendly establishments located in Alabama, Florida, Colorado and throughout the rest of Great Divide’s distribution network. A limited amount of the barrel-aged coffee beans featured in Coffee Porter will be available at Pablo’s locations and at select retailers.  Prost! 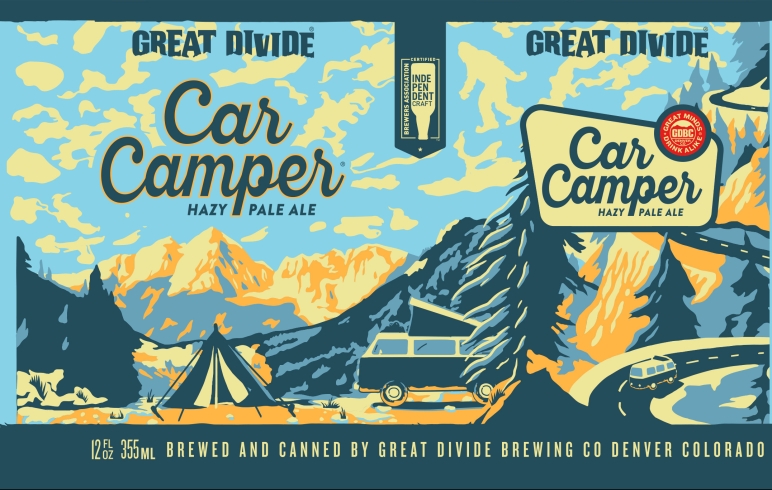 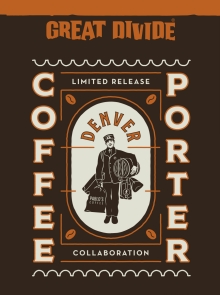 A new year means plenty of new beer, and this week we are here to provide you with a look at the 2020 Release Calendar from Great Divide Brewing Company (Denver, Colorado).

As is the case with most beer release calendars around these parts, we have posted Great Divide’s full 2020 Release Calendar below for you to sift through at your own leisure. With that said, there are a few exciting new releases and changes that we would like to point out real quick.  Let’s get to it:

“Whitewater will be crisp, refreshing and taste like real fruit,” explained Great Divide founder and president, Brian Dunn. “We’re excited to meet the demand for seltzer with a product we’re proud to serve and drink.”

Those are just a few of the highlights, but there are still quite a few new releases and returning fan-favorites left for you to discover on the calendar below.  Check it out and get ready for another exciting year with Great Divide Brewing Company in 2020. Prost! 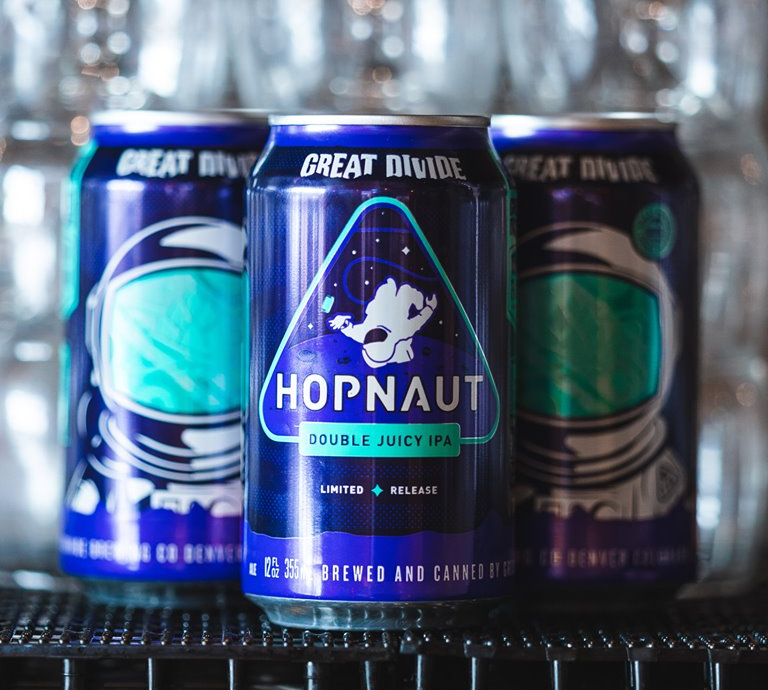 Great Divide Brewing Company (Denver, Colorado) has officially announced that it will begin the Limited Release of Hopnaut Double Juicy IPA in October 2019.

Developed to take the place of Hop Disciples IPA in Great Divide’s Tank Farm Series, Hopnaut is Juicy Double India Pale Ale “brewed and double dry-hopped with an unearthly amount of Simcoe, El Dorado, Mosaic and Huell Melon hops.” This hop bill – which amounts to “over a pound and a half of hops per barrel” – lends this DIPA “bold tropical fruit and citrus notes along with hints of berry, stone fruit, pine and bubblegum.”  Coming in at 8% ABV, Hopnaut promises to be an “an extraterrestrial sensory experience.”

“With the success of our Hazy IPA, our brewers have been experimenting with a lot of hop-heavy hazy and juicy IPAs on the pilot system,” explained Bill Bertsch, Sr. Director of Brewery Operations. “Hopnaut will be a hit with New England-style IPA fans but also those who appreciate a well-balanced, filtered IPA.”

Hopnaut Double Juicy IPA is available now and is scheduled to stick around through January 2020.  You can expect to find this new Tank Farm offering available in 6-packs of 12 oz. cans and on draft at select craft beer-focused establishments located in Alabama, Florida, Colorado and throughout the rest of Great Divide’s distribution territory.  Prost!

Great Divide Brewing Company (Denver, Colorado) has announced that its Colorado-centric Fresh Hop Pale Ale has returned for a Seasonal run spanning from September to November 2018.

Back to claim its spot in Great Divide’s Tank Farm series, Fresh Hop is an American Pale Ale built from a recipe featuring all Colorado ingredients – “whole cone Cascade hops from Colorado’s own High Wire Hop Farm, . . . malt locally sourced from Proximity Malt in Monte Vista, and yeast from the Brewing Science Institute near Colorado Springs.” These locally produced goodies supply Fresh Hop Pale Ale (6.1% ABV) with a “grassy, citrus hop brilliance” that is “meant to be enjoyed immediately.”

Fresh Hop Pale Ale is releasing this month and has plans to stick around through November.  You can expect to find this Seasonal offering available in 6-packs of 12 oz. cans and on draft at select craft beer-focused establishments located in Alabama, Florida, Colorado, and throughout the rest of Great Divide’s distribution area.  Prost!

Great Divide Brewing Co. (Denver, Colorado) just added some intrigue to the year ahead with the publication of a 2018 Release Calendar that brings news of seven new beers.

Another day means another beer calendar, and we have Great Divide Brewing Co.’s full 2018 Release Calendar available below.  You can jump straight to it, or bear with us while we quickly highlight those seven new brews.  It’s totally your call . . .

That covers the new offerings, but there is still plenty to see on the calendar below.  Give it a good look so that you can be properly prepared for the Great Divide awesomeness headed your way in 2018.  Prost! 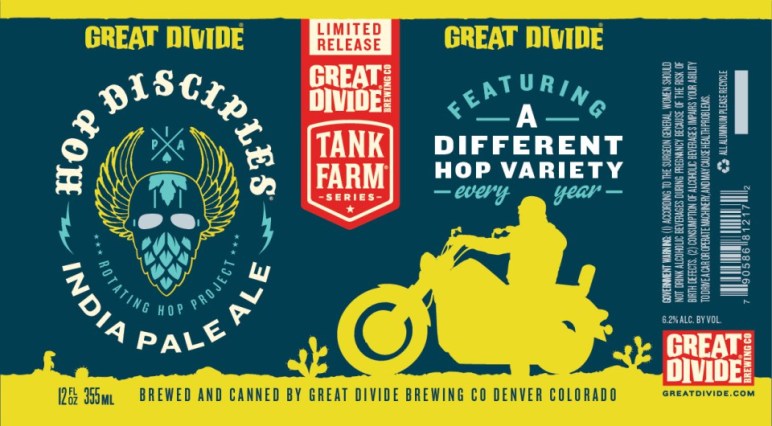 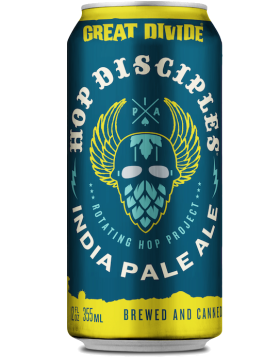 Rather than handcuffing themselves to a specific recipe for a seasonally released India Pale Ale, Great Divide Brewing Co. has decided to approach Hop Disciples IPA as more of “a rotating hop project” that provides hop lovers with the freshest and most exciting experience possible with each year’s release.  This goal is achieved by brewing a bright, clean IPA that will feature “a different hop variety at the forefront of the sensory experience every year.”  The 2017 version of Hop Disciples will showcase the Idaho 7 variety, a hop that displays “aromas of orange zest and stone fruit complemented by a hint of black tea leaves in an uncharacteristic element of subtlety.”  Hop Disciples will join Old Ruffian Barley Wine Style Ale, Nadia Kali Hibiscus Saison, and Fresh Hop Pale Ale to round out Great Divide’s Tank Farm Series, a lineup of seasonally released, experimental styles that allows “the brewers a chance to play a bit.”

The Hop Disciples IPA project will officially launch in January of 2017.  Once released, you will be able to find this brew available in 12 oz. cans at craft beer-friendly retailers in Alabama, Florida and anywhere else within the Great Divide distribution footprint that normally sees Hop Farm releases.  If you have been looking for a new IPA to enjoy and/or a new hop to experience, be sure to keep an eye out for this one when it drops early next year.  Prost!